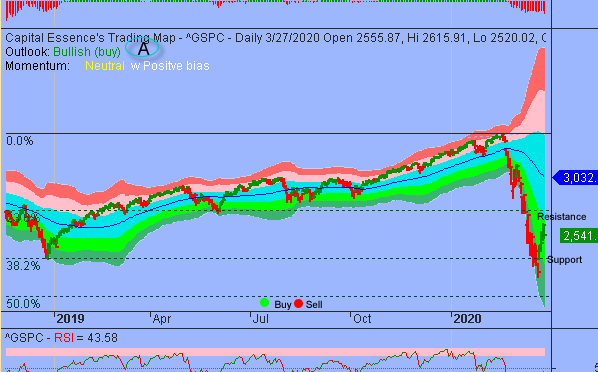 We’ve noted in the previous Market Outlook that: “so far this week’s massive oversold rally has proved nothing as far as its staying power or as a possible major trend reversal.  While there seems to be room to go higher, traders must be mindful of the looming resistance near S&P’s 2640.  Some backings and fillings would not be a surprise.  What this means is that as the index inches into key overhead resistance, aggressive sellers will most likely dips in their toes to see how the market reacts.  So, we’d be cautious against taking large position at this stage.”  As anticipated, stocks fell Friday, giving back some of the strong gains experienced in the previous three days to cap off another volatile week on Wall Street.  Sentiment took a hit as investors focused back on the coronavirus outbreak as the U.S. became the country with the most confirmed cases.

Technology stocks were among the biggest declines amid late-day selling as investors remain wary of holding onto bullish bets over the weekend amid the ongoing Covid-19 pandemic.  As such, the Technology Select Sector SPDR ETF (XLK) slumped 4.52 percent on the day and is down more than 14 percent YTD, outperformed the S&P.  Now the question is what’s next?  Below is an update look at a trade in XLK. 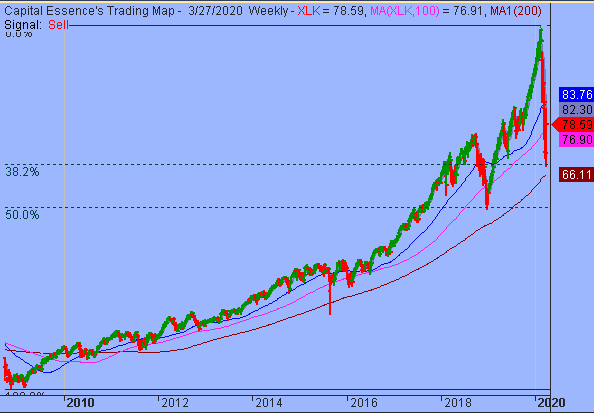 Our “U.S. Market Trading Map” painted XLF bars in red (sell) – see area ‘A’ in the chart.  Like the rest of the market, XLK is in free fall mode since late February after the 2019 rally ran out of steam just above the 100 mark.  The March downswing tested support at the 38.2% Fibonacci retracement of the 2009-2020 major upswing.  That level roughly corresponds with the 4-year moving average, a key technical level based on moving averages. So far, last week’s oversold relief bounce has proved nothing as far as its staying power or as a possible major trend reversal.  XLK has 84 to trade against. There is no reason to turn particular bullish until this zone is eclipsed.

XLK has support near 67.  A close below that level has measured move to around 57. 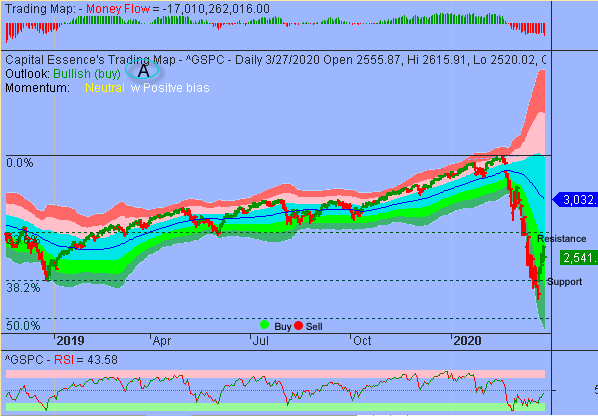 As expected, S&P retreated after last week’s recovery rally ran into resistance near the 2650 zone.  The main event here is the downward push against key resistance at the upper boundary of the green band.  That level was significant when the index fell below it in late February.   Money Flow measure is at the lowest level going back to late 2018, indicating a negative net demand for stocks.  Momentum has been strengthened over the past few days but does not appeared strong enough to fuel a significant push upward from here.

For now, 2650 represents key overhead resistance.  The bulls must hurdle and sustain above that level.  Staying below it heralds further weaknesses. A close above 2650 on a weekly closing basis will turn the medium-term trend up and trigger acceleration toward the 2900 zone.

Last week’s bullish breakaway gap, around 2350, represents key support.  A failure to hold above that level will bring the 2200 back into view.

In summary, while last week’s recovery rally appeared to have run out of steam, the short-term uptrend pressure remains up and the daily charts are still building on encouraging formations. Though there just isn’t enough bullish power to fuel a significant push upward from here. With all that said, the market needs some sorts of positive catalysts and a good consolidation to build up the needed energy for a new leg higher.