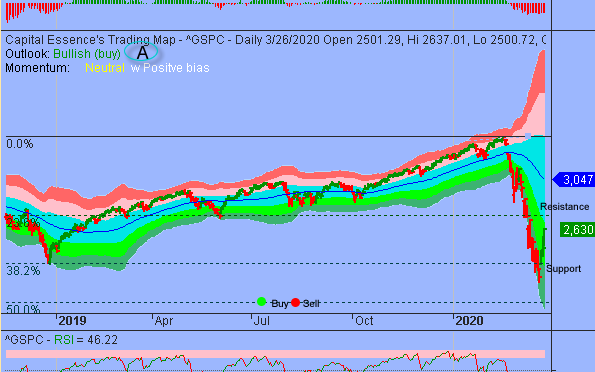 Wall Street rallied for a third straight session on Thursday as record weekly jobless claims came in below investors’ worst fears and investors focused on an unprecedented $2 trillion stimulus awaiting approval by the U.S. House of Representatives.  The Dow Jones Industrial Average jumped 6.4 percent to 22,552.17.  The S&P surged 6.2 percent to 2,630.07. The Nasdaq Composite advanced 5.6 percent to 7,797.54.  The CBOE Volatility Index (VIX), widely considered the best gauge of fear in the market, rose more than 3 percent to 63.95.

Financials also supported the broad-based rally, led by banking, even as Treasury yields dropped.  JPMorgan (JPM), Goldman Sachs (GS) and Bank of America (BAC) all rallied more than 6 percent.  As such, the Financial Select Sector SPDR ETF (XLF) surged 6.28 percent on the day but is down about 30 percent YTD, underperformed the S&P.  Now the question is whether the rally has more legs?  Below is an update look at a trade in XLF. 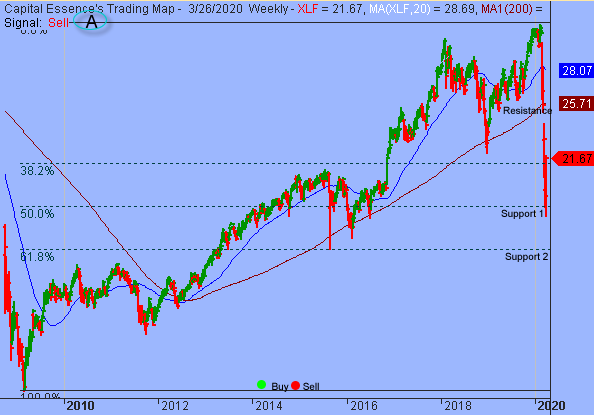 Our “U.S. Market Trading Map” painted XLF bars in red (sell) – see area ‘A’ in the chart.  Like the rest of the market, XLF is in free fall mode since late February after the 2019 rally ran out of steam just above 31.  The March downswing tested support at the 50% Fibonacci retracement of the 2009-2020 major upswing.  This week’s massive bullish engulfing bar suggested that the support would hold, at least for the time being.  A close above 21 on a weekly closing basis will confirm this and open up for a test of the more important resistance near the 25.70 zone. Given the damages done over the past weeks, rallies are counter trend bounces and should be sold.

XLF has support near 18.  A close below that level has measured move to around 15. 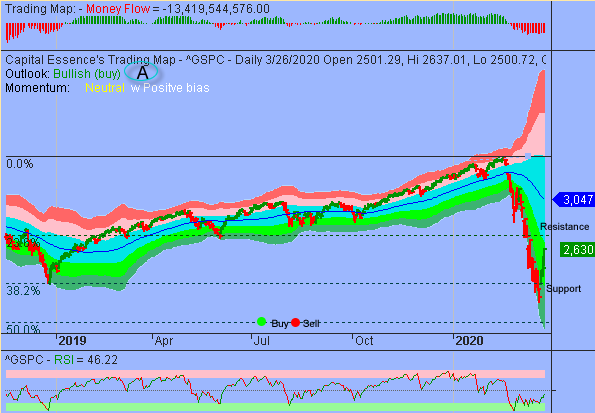 As expected, S&P moved up to test key resistance at the upper boundary of the green band, around 2640, after the February massive selloff found support the important sentiment 2200 zone. Momentum indicator shifted higher from oversold zone, allowing further upside probing.    This is a positive development but let’s notice that Money Flow measure is below the zero line, indicating a negative net demand for stocks.  So we’d be cautious against taking large position at this stage of a rally.

For now, 2640 represents key overhead resistance.  A close above that level on a weekly closing basis will turn the medium-term trend up and trigger acceleration toward the 2900 zone.

In summary, so far this week’s massive oversold rally has proved nothing as far as its staying power or as a possible major trend reversal.  While there seems to be room to go higher, traders must be mindful of the looming resistance near S&P’s 2640.  Some backings and fillings would not be a surprise.  What this means is that as the index inches into key overhead resistance, aggressive sellers will most likely dips in their toes to see how the market reacts.  So, we’d be cautious against taking large position at this stage.