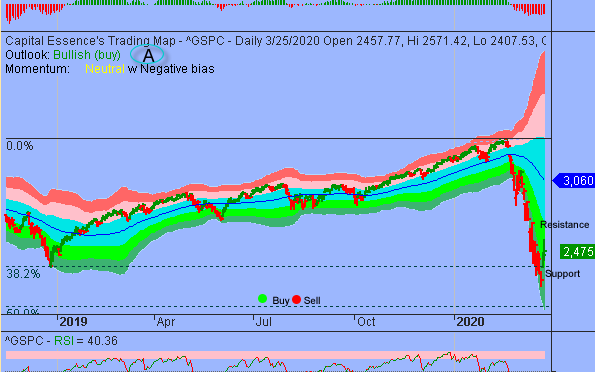 We’ve noted in the previous Market Outlook that: “Tuesday’s massive recovery rally helped putting the bulls back onto the driver side of the market but it doesn’t mean that we’re out of the woods.  Given the looming resistance near S&P’s 2450, there is no big commitment to accumulate stocks aggressively at this point.”  As anticipated, stocks traded significantly higher for most on Wednesday session that saw the S&P traded as high as 2571 before gave back most of the gains into the close.  For the day, the bench mark gauge rose 1.1 percent to 2,475.56. The Dow Jones Industrial Average climbed more than 2 percent to 21,200.55.  The Nasdaq Composite dipped 0.5 percent to 7,384.30 as Facebook, Amazon Apple, Netflix and Google-parent Alphabet all closed lower.  The CBOE Volatility Index (VIX), widely considered the best gauge of fear in the market, rose more than 3 percent to 63.95.

Investors cashed out the yellow metal a day after chasing it to just a whisker shy of $1,700 an ounce on Tuesday. The surge in gold prices this week has been spectacular with the Fed’s massive QE program and a $2 trillion U.S. government stimulus package to soften the economic damage of the coronavirus outbreak.  As such, the SPDR Gold Shares (GLD) fell 1.37 percent on the day but is up about 6 percent YTD, outperformed the S&P.  Now the question is whether the rally has more legs?  Below is an update look at a trade in GLD. 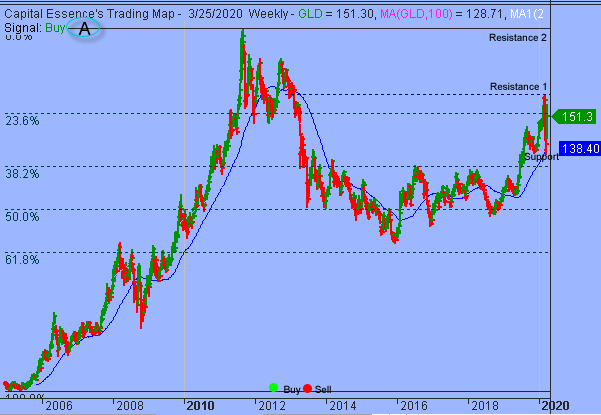 Our “U.S. Market Trading Map” painted GLD bars in green (buy) – see area ‘A’ in the chart.  Over the past few weeks, GLD has been trending lower in a short-term corrective mode after the late 2019 rally ran out of steam near the 2013 breakdown point.  The March correction tested support at the 1-year moving average, a key technical level based on moving averages.  This week’s bullish reversal suggested that the support would hold and opened up for a test of the 152-160 zone, or the 23.6% Fibonacci retracement of the 2005-2011 major upswing and the 2013 breakdown point.  A close above 160 on a weekly closing basis will confirm the bullish signal and a retest of the 2011 high, around 185, should be expected.

GLD has support near 138.  A close below that level has measured move to around 42. 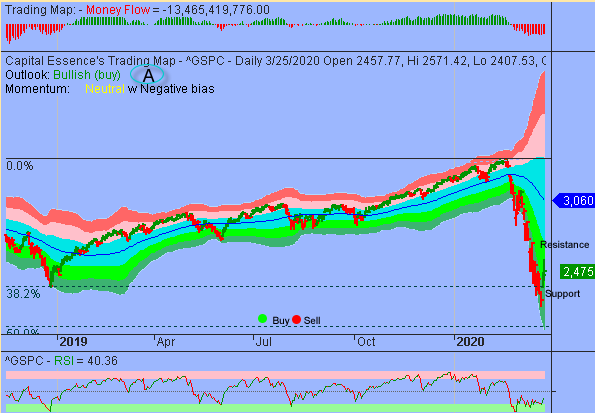 As expected, S&P moved up to test resistance at the 2520-2600 zone following Tuesday’s upside breakout.  Wednesday’s upside follow-through confirmed the bullish signal. This is a positive development but the late day selloff suggested that we’re not out of the woods.  Money Flow measure trended higher from below the zero line, indicating that selling pressure has eased. These elements increased the probability for further backings and fillings in the coming days.

On the upside, the S&P has 2600 to trade against.  A sustain advance above that level will turn the medium-term trend up and trigger acceleration toward 2900.

In summary, current price structure suggests that market is in a process of establishing an important near-term support plateau. There is a high probability of a period of consolidation activity between S&P’s 2600 and 2200 that may last several days.  This consolidation band provides a rally and retreat trading environment for traders.