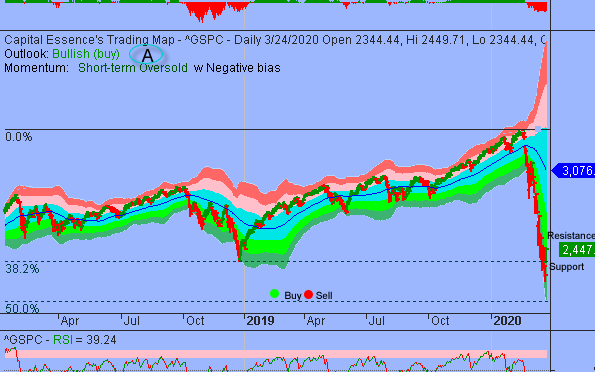 We’ve noted in the previous Market Outlook that: “Monday’s bearish break below the important sentiment 2300 mark on the S&P suggested that bottoming process will take more time and probably inflict more damage to stocks.  While there seems to be room to go lower, the selloff is overextended so it should not be surprised to see at least an attempt to rally in the coming days.”  As anticipated, stocks soared on Tuesday as investors hoped U.S. lawmakers were close to an agreement on a stimulus bill to rescue the economy from the damage caused by the coronavirus.  The S&P rallied 9.4 percent to 2,447.33 for its best day since October 2008. The Nasdaq Composite surged 8.1 percent to 7,417.86.  The Dow Jones Industrial Average soared more than 11 percent to 20,704.91, notching its biggest one-day percentage gain since 1933.  The CBOE Volatility Index (VIX), widely considered the best gauge of fear in the market, closed flat at 61.67.

Industrials outperformed, led by a surge in Boeing (BA) soared 20 percent, as investors bet the aircraft maker could be set for a big cash injection.  In a Fox News interview, Trump said he would not allow Boeing to plunge into bankruptcy, insisting that the aircraft maker would need a “small amount” of money.  As such, the Industrial Select Sector SPDR ETF (XLI) surged 12.65 percent on the day but is down about 33 percent YTD, underperformed the S&P.  Now the question is whether the rally has more legs?  Below is an update look at a trade in XLI. 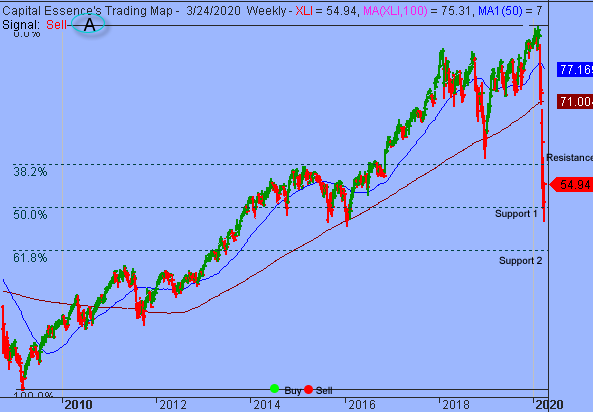 Our “U.S. Market Trading Map” painted XLI bars in red (sell) – see area ‘A’ in the chart.  Like the rest of the market, XLI is in freefall mode after the February selloff pushed the ETF below the 4-year moving average, a key technical level based on moving averages.  The March downswing tested support at the 50% Fibonacci retracement of the 2009-2020 major upswing.  This week’s bullish trading action suggested that the support would hold.  This is a positive development, increased the probability for a test of the 60 zone.  That area represents key overhead resistance so it should not be surprising to see some renew selling pressure. Short-term traders could use it as the logical level to measure risk against.

XLI has support near 50.  A close below that level has measured move to around 42. 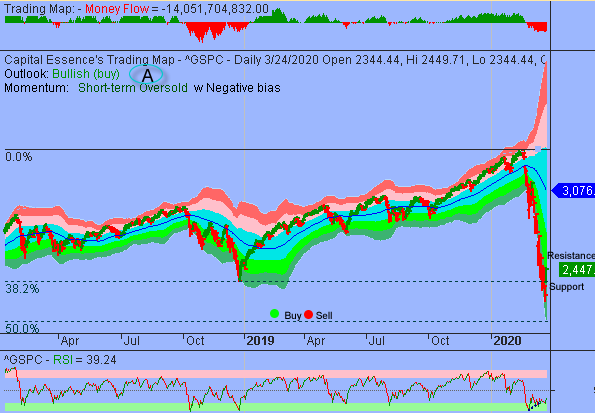 As expected, the S&P rebounded nicely after this week selloff found support near the important sentiment 2200 mark. Tuesday massive rally pushed the index above the massive 2-conjoing resistance near the 2350 zone, or the late 2018 low and the 38.2% Fibonacci retracement of the 2009-2020 major upswing.   This is a short-term positive development but let’s notice that the index is up against the upper limit of its short-term trading range, between 2450 and 2300, after Tuesday’s recovery rally.  A consecutive close above 2450 is required before there is any real prospect of a change in the overall downward pressure.  With that said, a consecutive close above 2450 will confirm Tuesday’s bullish reversal signal and open up for a test of the more important resistance near the 2520-2600 zone.

In summary, Tuesday’s massive recovery rally helped putting the bulls back onto the driver side of the market but it doesn’t mean that we’re out of the woods.  Given the looming resistance near S&P’s 2450, there is no big commitment to accumulate stocks aggressively at this point.