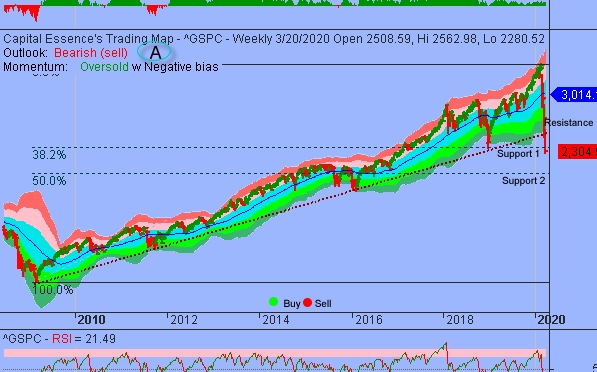 Stocks fell Friday, concluding one of the most volatile weeks on Wall Street ever as investors grapple with mounting fears over the coronavirus’ economic blow.  The S&P slid 4.3 percent to 2,304.92 while the Nasdaq Composite fell 3.8 percent to 6,879.52.  The Dow Jones Industrial Average dropped more than 4 percent to 19,173.98.  The CBOE Volatility Index (VIX), widely considered the best gauge of fear in the market, fell more than 8 percent to 66.04.

The sea of red on Wall Street was paced by declines in utilities and consumer staples, which usually serves as a defensive corner of the market.  Kroger (KR) and Clorox (CLX) tumbled more than 7 percent while Walgreens Boots Alliance (WBA) fell more than 4 percent.  As such, the Consumer Staples Select Sector SPDR ETF (XLP) dropped 6.5 percent on the day and is down 20 percent YTD, outperformed the S&P.  Now the question is what’s next?  Below is an update look at a trade in XLP. 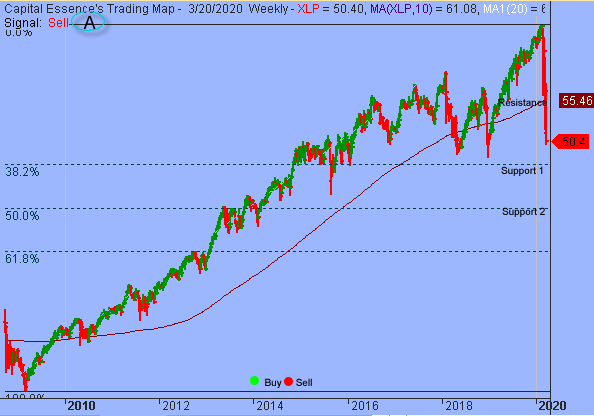 Our “U.S. Market Trading Map” painted XLP bars in red (sell) – see area ‘A’ in the chart.  Like the rest of the market, XLP is in free fall mode after the late February selloff undercut the 4-year moving average, a key technical level based on moving averages. Over the next few days, the most important thing to watch is trading behavior as the 48 zone, the 2018 lows and the 38.2% Fibonacci retracement of the 2009-2020 upswing, is tested as support.  While not expected at this moment, a failure to hold above that level will bring the 50% Fibonacci retracement, around 42, into view.

XLP has resistance near 55.  Short-term traders could use that level as the logical level to measure risk against. 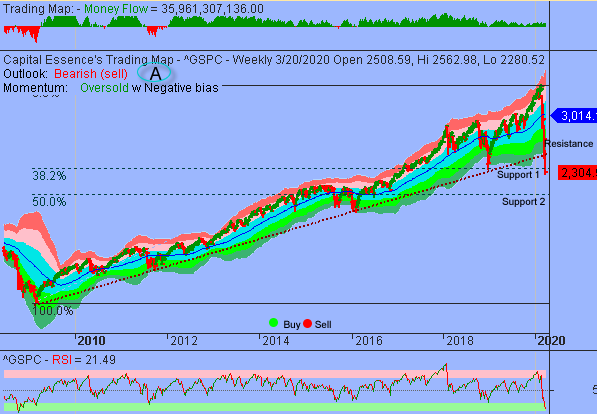 Key technical development in Friday session was a close below the massive 2-conjoing support near the 2350 zone, or the late 2018 low and the 38.2% Fibonacci retracement of the 2009-2020 major upswing.   This is a negative development, increased the probability of the test of the more important support at the 2000 zone, of the 50% Fibonacci retracement.

Momentum indicator is at the lowest level going back to late 2008 – the Financial Crisis, indicating extreme oversold conditions.  While oversold condition is normal during a major downswing, it’s suggested that the market might take a short-term breather prior to a major selloff.  So it should not be surprising to see some consolidations prior to new downswing. If the market is going to find bottom in the near term, we want to see the S&P establishes some trading ranges and climbs above 2640.  Staying below that level heralds more losses.

The 2300 mark represents key support.  A close below that level on a weekly basis will trigger a new wave of selling with downside target around 2000.

In summary, S&P broke several supports last week, capping off its worst week since 2008. When key supports broke it means that long-term buying pressure has finally been exhausted.  The index is at critical level.  The 2300 mark represents key support.  A close below that level on a weekly closing basis will bring the 2000 zone into view.  If the market is going to find bottom in the near term, we want to see the S&P establishes some trading ranges and climbs above 2640.  Staying below that level heralds more losses.