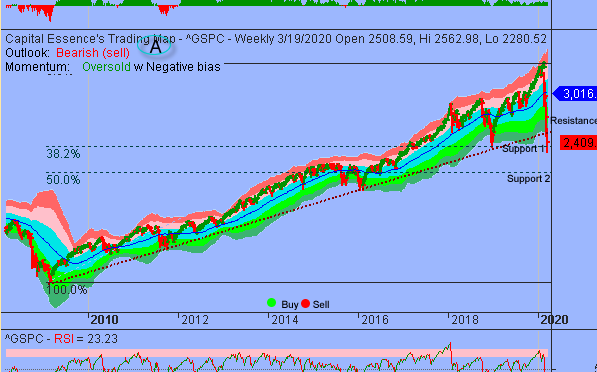 We’ve noted in the previous Market Outlook that: “while the overall technical backdrop and trading sentiment remain negative, our near-term work on momentum and price pattern suggested strongly that S&P sell-off may now be set for a pause in the next few days as oversold conditions are absorbed.”  As anticipated, stocks rose on Thursday, led by rebound energy stocks amid a surge in oil prices and a rally in tech, but gains were kept in check by the ongoing coronavirus pandemic.  The S&P added 0.5 percent to 2,409.39 while the Nasdaq Composite gained 2.3 percent to 7,150.58.  The Dow Jones Industrial Average rose nearly 1 percent to 20,087.19.  The CBOE Volatility Index (VIX), widely considered the best gauge of fear in the market, fell nearly 6 percent to 72.

A day after a sharp decline in tech, investors jumped into tech stalwarts such as Facebook (FB), Amazon (AMZN), and Netflix (NFLX), helping the broader market clawed back some of its losses from a day earlier.  Chip stocks were also in demand, with the iShares PHLX Semiconductor ETF (SOXX) rose 2.6 percent on the day but is down more than 27 percent YTD, slightly underperformed the S&P.  Now the question is whether the rally has more legs?  Below is an update look at a trade in SOXX.

Our “U.S. Market Trading Map” painted SOXX bars in red (sell) – see area ‘A’ in the chart. The first dominant feature on the chart is the rising trend line starting in 2009.  The second dominant feature of the chart is the downward trend since February 2019.  This week’s massive selloff pushed the ETF down to the 4-year moving average, a key technical level based on moving averages.  This level is significant in charting terms. It was tested several times over the past years.  The normal behavior has been to consolidate and rebound every time this level is tested so there is a high probability that a significant consolidation pattern will again develop in this area.  Although not expected at this moment, a failure to hold above 169 on a weekly closing basis has measured move to around 137, or the 50% Fibonacci retracement of the 2009-2020 bull run.

SOXX has resistance just below 200.  Short-term traders could use that level as the logical level to measure risk against. 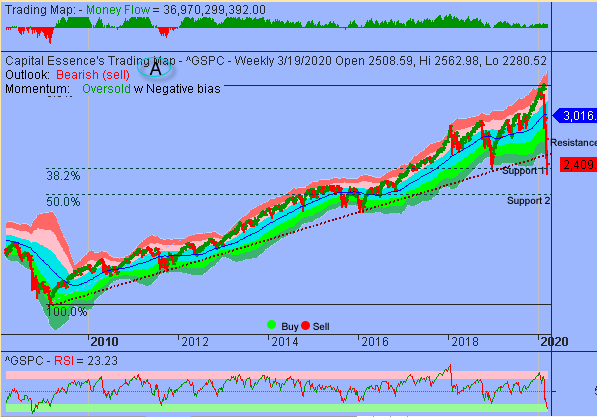 Looking at the 10-year weekly chart of the S&P, we can see that there is currently a test of support at the 38.2% Fibonacci retracement of the 2009-2020 major upswing.  Momentum indicator is at the lowest level going back to late 2008 – the Financial Crisis, indicating extreme oversold conditions. In fact, trading actions over the past few days represented an orderly low-level consolidation period in the aftermath of the February massive selloff.  So it should not be surprising to see some consolidations prior to new downswing. If the market is going to find bottom in the near term, we want to see the S&P stabilizes and climbs above 2640.  Staying below that level heralds more losses.

In summary, the fact that the S&P is basing sideways rather than bouncing higher as market digested February-March massive selloff indicating an internal weakness.  We’re expected the S&P to shift to an orderly low-level consolidation period prior to new downswing as markets work off oversold conditions.