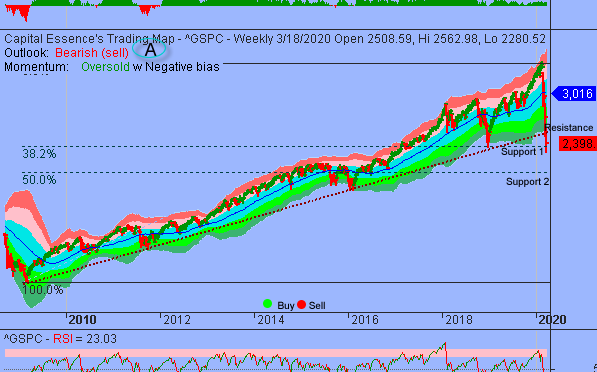 We’ve noted in the previous Market Outlook that: “S&P tested and held support at the late 2018 low.  However, Tuesday’s rally has proved nothing as far as its staying power or as a possible trend reversal.  If the market is going to find bottom in the near term, we want to see the S&P stabilizes and climbs above 2640.  There is a no reason to turn particularly bullish until this area is eclipsed.”  As anticipated, stocks tumbled out of gate Wednesday, gave back all of previous session gains, as oil prices plunged to an 18-year low amid a precarious future for the travel industry and the broader economy as the Covid-19 pandemic gathers pace.  The S&P dropped 5.2 percent to 2,398.10.  The Dow Jones Industrial Average fell 6.3 percent to 19,898.92, marking its first close below 20,000 since February 2017.  The Nasdaq Composite slid 4.7 percent to 6,989.84.  The CBOE Volatility Index (VIX), widely considered the best gauge of fear in the market, fell more than 8 percent to 75.91.

Financials led the broader decline on Wall Street as banking stocks fell sharply amid ongoing concerns that net interest margins will compress amid low-interest rates and a likely recession will ramp up the cost of credit.  As such, the Financial Select Sector SPDR ETF (XLF) tumbled 8.49 percent on the day and is down about 38 percent YTD, underperformed the S&P.  Now the question is what’s next?  Below is an update look at a trade in XLF. 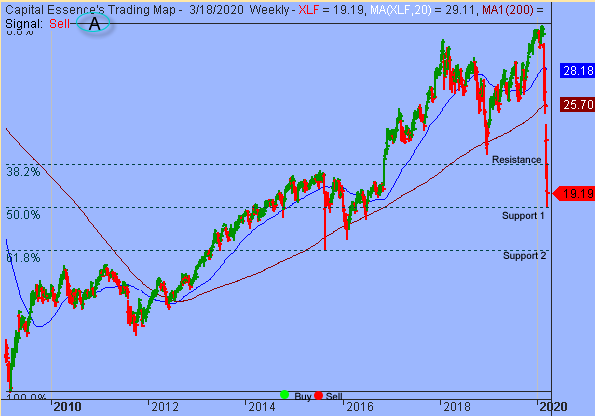 Our “U.S. Market Trading Map” painted XLF bars in red (sell) – see area ‘A’ in the chart. The first dominant feature on the chart is the rising trend line starting in 2009.  The second dominant feature of the chart is the downward trend since February 2019.  This week’s massive selloff undercut the 38.2% Fibonacci retracement of the 2009-2020 major upswing and pushed the ETF down to the 50% Fibonacci retracement, around 18, a key technical level based on Fibonacci levels.  The normal behavior has been to consolidate and rebound every time this level is tested so there is a high probability that a significant consolidation pattern will again develop in this area.  A failure to hold above 18 on a weekly closing basis has measured move to around 15, or the 61.8% Fibonacci retracement.

XLF has resistance around 21.  Short-term traders could use that level as the logical level to measure risk against. 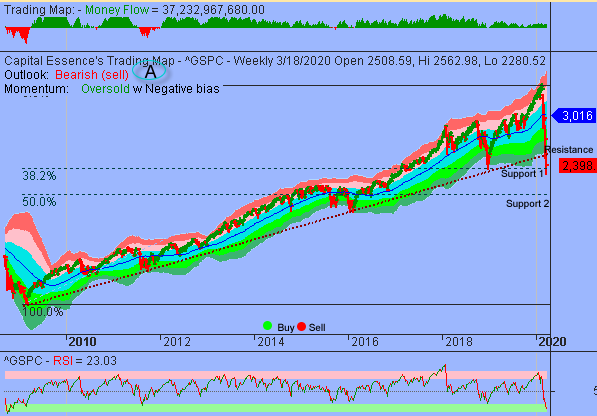 Once again, the S&P moved down to test support at the late 2018 low. Wednesday’s late day rally pushed the index above the closely watch 2350 mark.  Momentum indicator is at the lowest level going back to late 2008 – the Financial Crisis, indicating extreme oversold conditions so it should not be surprising to see at least an attempt to rally in the coming days. Nonetheless, given the damages done over the past weeks, rebound should be short-lived.  If the market is going to find bottom in the near term, we want to see the S&P stabilizes and climbs above 2640.  Staying below that level heralds more losses.

In summary, while the overall technical backdrop and trading sentiment remain negative, our near-term work on momentum and price pattern suggested strongly that S&P sell-off may now be set for a pause in the next few days as oversold conditions are absorbed.