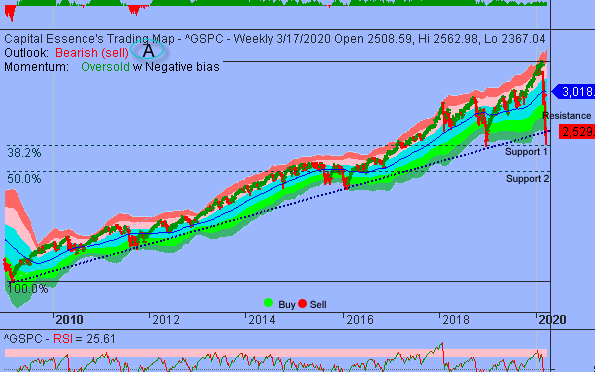 Stocks surged Tuesday, rebounding from their worst day in more than three decades as the Trump administration stoked hopes of a major stimulus package to tackle the Covid-19 outbreak.  In an effort to shore up the economy, the administration is widely believed to put forward proposals for a stimulus package in the range of $850 billion to $1 trillion.  The package could include relief for Americans in the form of direct payments and tax breaks and deferred payments.  The Dow Jones Industrial Average jumped 5.2 percent to 21,237.31. The S&P rose 6 percent to 2,529.19 while the Nasdaq Composite gained 6.2 percent to 7,334.78.  The CBOE Volatility Index (VIX), widely considered the best gauge of fear in the market, fell more than 8 percent to 75.91.

Gold jumped on Tuesday as a five-session decline in the bullion market led bargain hunters out in force, with the Federal Reserve’s announcement to relaunch financial crisis-era purchases of short-term corporate debt offering further support. The yellow metal was caught up in a broader market sell-off as coronavirus continued to spread rapidly, with some investors obliged to sell assets to cover margin calls.  Spot gold jumped 1.5 percent to $1,536.62 per ounce. U.S. gold futures soared 3.3 percent to $1,535.60.  As such, the VanEck Vectors Gold Miners ETF (GDX) soared 13.38 percent on the day but is down about 13 percent YTD, outperformed the S&P.  Now the question is whether the rally has more legs?  Below is an update look at a trade in GDX. 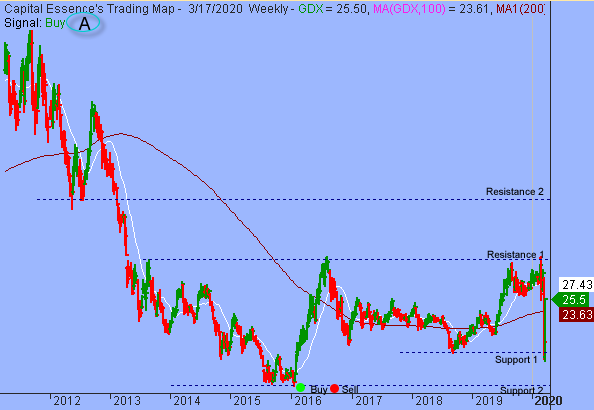 Our “U.S. Market Trading Map” painted GDX bars in green (buy) – see area ‘A’ in the chart. The first dominant feature on the chart is the downward trend line starting in 2011 to 2016.  The second dominant feature of the chart is the sideways trading pattern between 18 and 31 since mid-2016.  The late 2019 rally ran out of steam near the formidable resistance at the 31 zone.  The late February selloff tested support near the 18 zone.  This week’s bullish reversal suggested the support would hold.  This is a positive development, opened up for a retest of the 31 zone.  A sustain advance above that level has measured move to around 40, or the early 2013 breakdown point.  A close above 23 on a weekly basis will confirm this.

GDX has support around 18.  Short-term traders could use that level as the logical level to measure risk against. 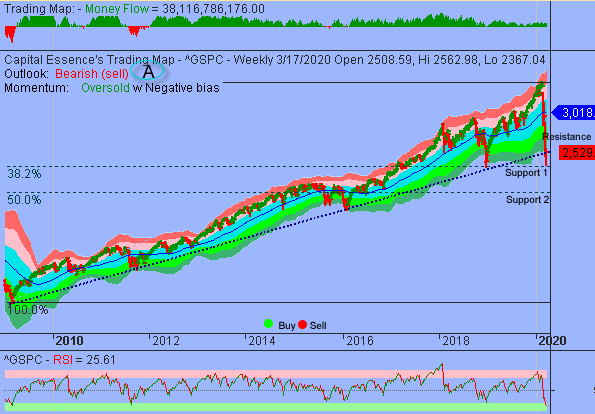 S&P tested and bounced off support at the late 2018 low. Momentum indicator is at the lowest level going back to late 2008 – the Financial Crisis, indicating extreme oversold conditions so it should not be surprising to see at least an attempt to rally in the coming days.  Tuesday’s rally pushed the index above the bottom of its short-term trading range.  This is a short-term positive development.  However, if the market is going to find bottom in the near term, we want to see the S&P stabilizes and climbs above 2640.  Staying below that level heralds more losses.

In summary, S&P tested and held support at the late 2018 low.  However, Tuesday’s rally has proved nothing as far as its staying power or as a possible trend reversal.  If the market is going to find bottom in the near term, we want to see the S&P stabilizes and climbs above 2640.  There is a no reason to turn particularly bullish until this area is eclipsed.