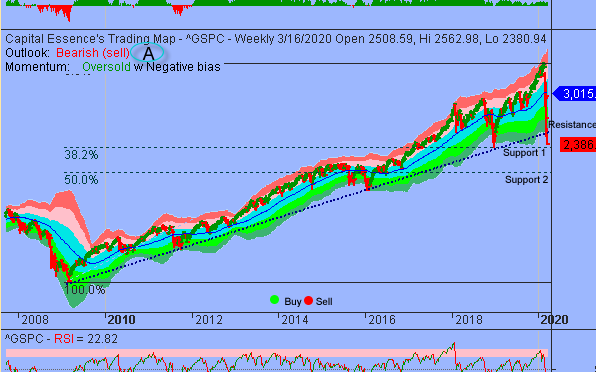 The major averages fell to their lows into the close after Donald Trump said the worst of the coronavirus outbreak could last until August. He also told reporters the U.S. “may be” heading into a recession.  The Dow Jones Industrial Average tumbled 12.9 percent to 20,188.52. The S&P dropped 12 percent to 2,386.13 while the Nasdaq Composite dropped 12.3 percent to 6,904.59 in its worst day ever.  The CBOE Volatility Index (VIX), widely considered the best gauge of fear in the market, soared 43 percent to 82.69.

Bank stocks took a hit, with Bank of America, JPMorgan Chase, Morgan Stanley and Citigroup all dropped more than 14 percent after these big banks announced Sunday they were halting their buyback programs in an effort to provide capital where needed.  As such, the SPDR S&P Bank ETF (KBE) tumbled 12.90 percent on the day and is down more than 42 percent YTD, underperformed the S&P.  Now the question is what’s next?  Below is an update look at a trade in KBE. 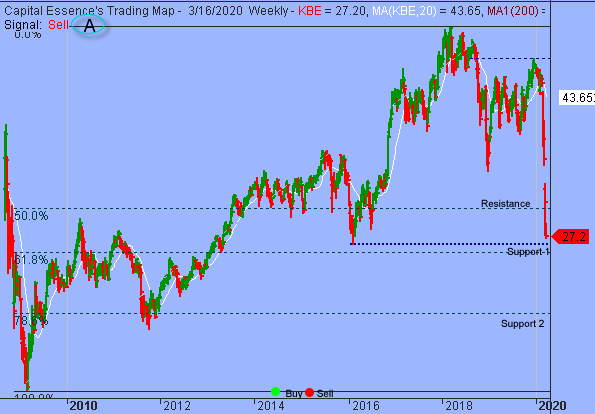 Our “U.S. Market Trading Map” painted KBE bars in red (sell) – see area ‘A’ in the chart. Like the rest of the market, KBE is in free fall since late February.  Last week’s massive selloff pushed the ETF below the 50% Fibonacci retracement of the 2009-2018 bull market.  Right now, the most important thing to watch is trading behavior as the 26 zone is tested as support.  That level roughly corresponds with the early 2016 low and the 61.8% Fibonacci retracement.  A failure to hold above that level has measured to around 18, or the 71.8% Fibonacci retracement.

KBE has resistance around 30.50.  Short-term traders could use that level as the logical level to measure risk against. 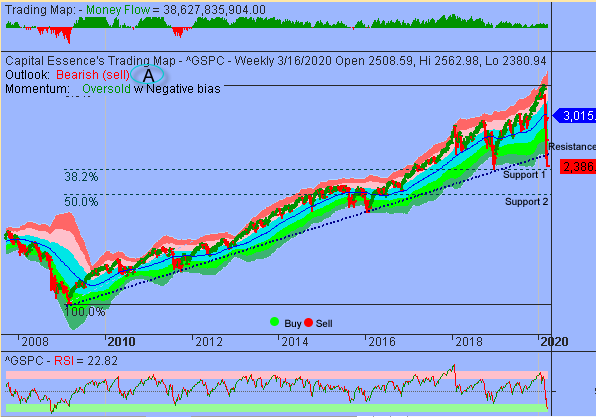 Key technical development in Monday session was a close below the 2009 rising trend line.  This is a negative development, signify a bearish breakout and downside reversal.  Right now the most important thing to watch is trading behavior as the late 2018 is tested as support.  That level is significant in charting terms.  A close below that level will confirm Monday’s bearish signal and increase the probability for a test of the more important support near the 2000 zone.

On the upside, S&P has 2640 to trade against.  There is a no reason to turn particularly bullish until this area is eclipsed.

In summary, market internal and trading sentiment continue to deteriorate as S&P undercut last week’s recovery low.  A failure to hold above key support means that most of the potential buyers at this level had already placed their bets. The next batch of buyers typically sits at a much lower level and we’re looking at 2200-2000.