Global equities plummeted and the Dow plunged to its biggest-one day percentage loss since October 1987 as fears the spread of the novel coronavirus will pick up pace and usher in a global recession overshadowed the Federal Reserve’s bold new stimulus measures to calm funding markets. The Dow Jones Industrial Average tumbled nearly 10 percent to 21,200.62. The S&P plummeted 9.5 percent to 2,480.64, joining the Dow in a bear market.  The Nasdaq Composite dropped 9.4 percent to 7,201.80.  The CBOE Volatility Index (VIX), widely considered the best gauge of fear in the market, soared 40 percent to close at 75.47.

Travel and airline also fell heavily as concerns over demand – as a result of the virus – were exacerbated after Donald Trump revealed a travel ban for non-citizens and non-residents from 26 European countries – excluding the U.K and Ireland – into the U.S.  Norwegian Cruise Line (NCLH) down 36% and Carnival (CCL) down 31%. American Airlines (AAL) slumped 17.7% and United Airlines (UAL) fell 25%.  As such, the iShares Transportation Average ETF (IYT) tumbled 10.61 percent on the day and is down more than 33 percent YTD, underperformed the S&P.  Now the question is what’s next?  Below is an update look at a trade in IYT. 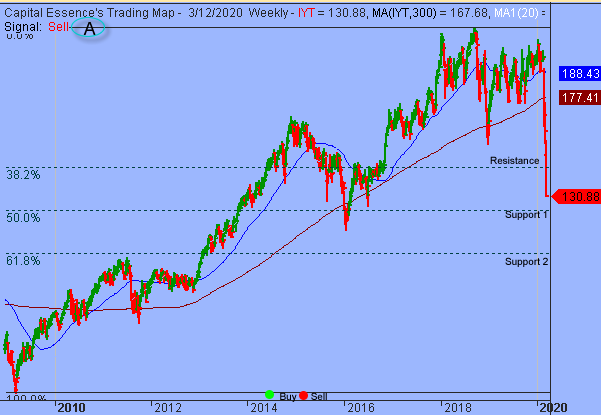 Our “U.S. Market Trading Map” painted IYT bars in red (sell) – see area ‘A’ in the chart. Like the rest of the market, IYT is in free fall mode after the late February selloff undercut the 4-year moving average, a key technical level based on moving averages.  This week’s selloff pushed the ETF below to the 38.2% Fibonacci retracement of the 2009-2018 upswing.  This is a bearish development, increased the probability for a test of the 50% Fibonacci retracement near 123.50.  That level is significant in charting terms. A failure to hold above it has measured move to around 103, or the 61.8% Fibonacci retracement.

IYT has resistance near 144.  Short-term traders could use that level as the logical level to measure risk against. 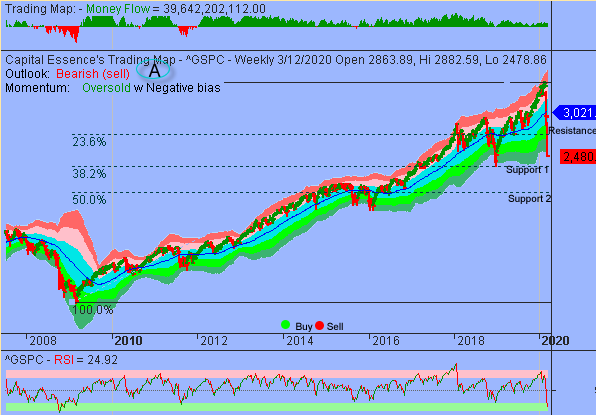 The S&P plummeted 9.5 percent Thursday, joining the Dow in a bear market. The index had its worst day since “Black Monday” market crash.  As indicated in the above chart, this week’s massive selloff pushed the index below bottom of its intermediate term trading range.  A consecutive close below 2500 will bring the late 2018 low, around 2350, into view.  That level roughly corresponds with the 38.2% Fibonacci retracement of the 2009-2020 major upswing.  Below it, a more significant support lies at the 50% Fibonacci retracement, just above 2000.

On the upside, S&P has 2600 to trade against.  If the market is going to find bottom in the near term, we want to see the S&P stabilizes and climbs above 2640.  Staying below that level heralds more losses.

In summary, the S&P ended an 11-year bull run Thursday, down more than 20 percent from the all-time highs set just a month ago. Stocks could signal an extended downward trajectory, depending on how they close over the next few days.  If the S&P fails to close above 2640 on Friday, then the next stop will be 2350 with the possibility of a major downswing to 2000 by the end of the March.