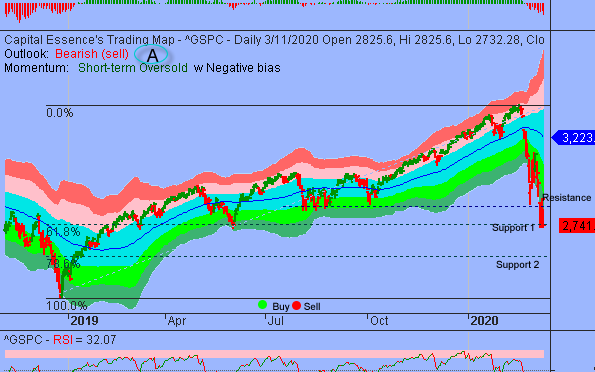 We’ve noted in the previous Market Outlook that: “divergence starts showing up as markets are going through bottoming process.  Our near-term work on momentum and price patterns suggested that the S&P likely hit its bottom on Monday.  Near-term, there is a high probability of rapid rallies and retreats between 2740 and 3050.  Short-term traders can play the range but the market is volatile and tight stops are advisable.”  As expected, stocks gave back prior session gains after the World Health Organization declared the coronavirus a global pandemic, sending the market into a selling frenzy.  For the day, the S&P dropped 4.9 percent to 2,741.38. The Nasdaq Composite fell 4.7 percent to 7,952.05.  The Dow Jones Industrial Average tumbled 5.9 percent to 23,553.22.  The CBOE Volatility Index (VIX), widely considered the best gauge of fear in the market, jumped 14 percent to close at 53.90.

Industrials fell 6 percent, paced by slump in Boeing (BA) after the aircraft maker reported weak orders and detailed plans to draw down the rest of a $13.8 billion loan facility. Boeing closed below $200 for the first time since July 2017.  As such, the Industrial Select Sector SPDR ETF (XLI) tumbled 5.87 percent on the day and is down more than 20 percent YTD, underperformed the S&P.  Now the question is what’s next?  Below is an update look at a trade in XLI. 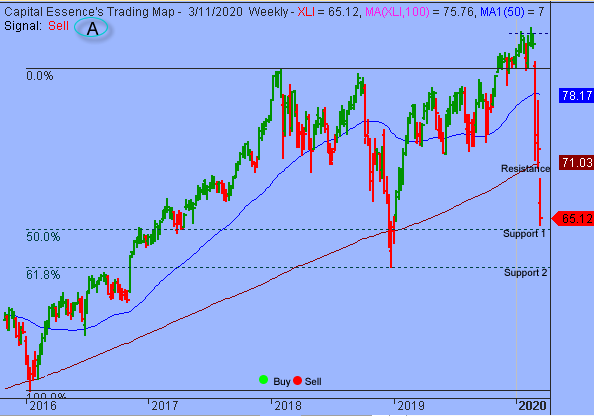 Our “U.S. Market Trading Map” painted XLI bars in red (sell) – see area ‘A’ in the chart. Like the rest of the market, XLI is in free fall mode after the late February selloff undercut the ETF the 4-year moving average, a key technical level based on moving averages.  This week’s selloff pushed the ETF down to the 50% Fibonacci retracement of the 2018-2020 upswing, around 64.  This level is significant in charting terms. It must hold on a weekly closing basis to prevent a test of the massive 2-conjoining support near the 60 zone, or the 61.8% Fibonacci retracement and the late 2018 low.

XLI has resistance near 71.  Short-term traders could use that level as the logical level to measure risk against. 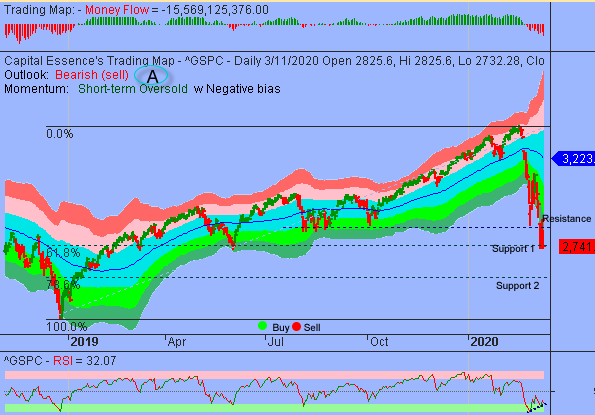 Once again, the S&P moved down to test support at the 61.8% Fibonacci retracement of the 2018-2020 upswing after recent rally attempt ran out of steam just below the 2900 mark.  Wednesday’s selloff pushed the index slightly below the bottom of its short-term trading range.  As mentioned, while it’s uncommon the S&P to break below the bottom of its short-term trading range, such a move lower is often followed by a quick snap back. Additionally, the positive divergence, momentum printed a higher low as S&P undercut the late February low, is another near-term plus for the bulls.  These elements suggested that a short-term relief bounce could be in the wings.  However, given the damages done over the past weeks, rallies should be short-lived.

On the upside, S&P has 2900 to trade against.  A close above that level could trigger acceleration toward the 3000-3050 zone.  If the market is going to find bottom in the near term, we want to see the S&P stabilizes and climbs above 3050.  Staying below that level heralds more losses.

In summary, it seems to us that the S&P is desperately trying to form a new trading range near 2740.  Our near-term work on momentum and price pattern suggested that a short-term relief rally could be in the wings.  However, given the damages done over the past weeks, expect continued near-term volatility as the bottoming process unfolds.