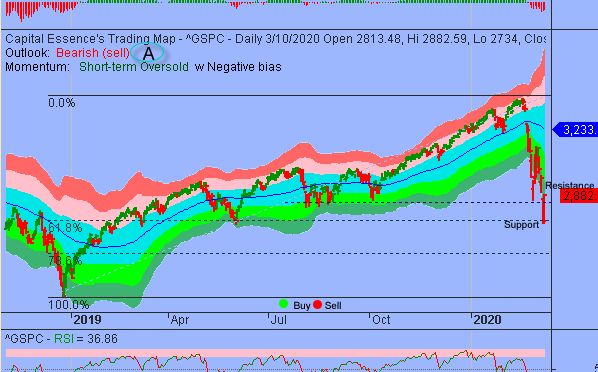 We’ve noted in the previous Market Outlook that: “Monday’s bearish breakdown signify an imminent major trend reversal. While there seems to be room to go lower, the selloff is overextended from a short-term perspective so it should not be surprised to see a quick snap back in the coming days.”  As expected, stocks closed sharply higher Tuesday in what was a turbulent session, with the broader market swinging between gains and losses as investors weighed up stimulus pledges from the White House against the ongoing spread of the novel coronavirus.  For the day, the S&P jumped 4.9 percent to 2,882.23. The Nasdaq Composite advanced 4.9 percent to 8,347.40.  The Dow Jones Industrial Average also added 4.9 percent to 25,018.16.  The CBOE Volatility Index (VIX), widely considered the best gauge of fear in the market, fell more than 13 percent to close at 47.30.

Oil prices saw some respite Tuesday. U.S. West Texas Intermediate crude futures were up more than 10 percent at $34.36 per barrel.  That came after a shocking all-out oil price war roiled markets already on edge about the economic fallout from the fast-spreading coronavirus. Oil posted its worst day since 1991, with the WTI plunging more than 24 percent Monday, after Saudi Arabia slashed crude selling prices for April following the collapse in OPEC talks.  As such, the Energy Select Sector SPDR ETF (XLE) jumped 4.74 percent on the day but is down about 41percent YTD, underperformed the S&P.  Now the question is what’s next?  Below is an update look at a trade in XLE. 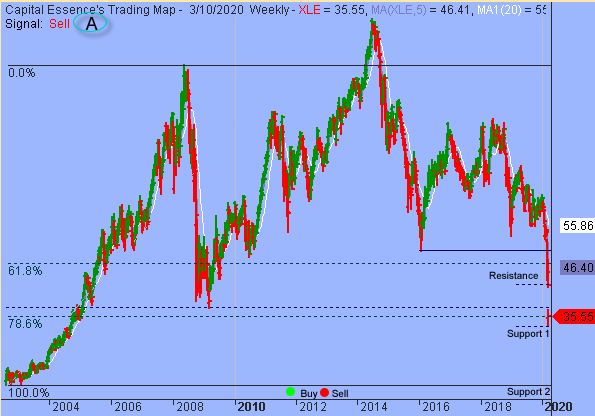 Our “U.S. Market Trading Map” painted XLE bars in red (sell) – see area ‘A’ in the chart. XLE is in free fall mode after the late February selloff pushed the ETF below the early 2016 low.  Monday’s selloff is testing support at the 78.6% Fibonacci retracement of the 2002-2008 major upswing.  Tuesday’s bullish reversal suggested that the lows are probably in and XLE is going through a bottoming process, starting with a test of the resistance near the 46 zone.

XLE has minor support near 42.  Expect a full retracement, a retest of 2002 low, just below 20, should the bulls fail to secure the 42 zone. 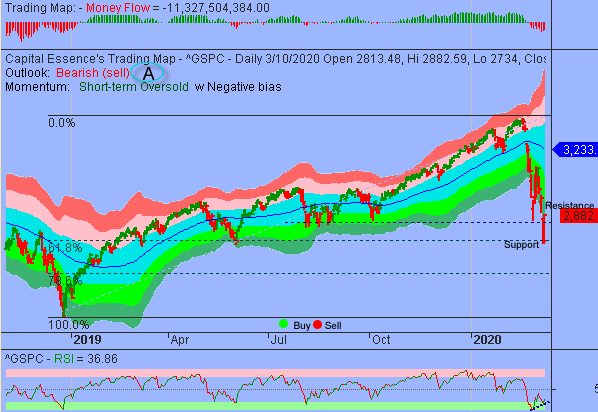 As expected, the S&P retested and held support at Monday’s intraday low.  The late day rally pushed the index back above the bottom of its short-term trading range.  This is a positive development, suggesting that less supply is coming into the market.  It worth noticing that momentum printed a higher low as S&P undercut the late February low.  This bullish divergence suggesting that a meaningful rebound could be in the wings.  However, we’re not out of the woods yet.  S&P has 2900-3050 to trade against.  We want to see the S&P stabilizes and climbs above 3050.  Staying below that level heralds more losses.

On the downside, the 61.8% Fibonacci retracement of the 2018-2020 upswing, around 2740, represents key support.  A failure to hold above that level would trigger a new selloff with downside target around 2570.

In summary, divergence starts showing up as markets are going through bottoming process.  Our near-term work on momentum and price patterns suggested that the S&P likely hit its bottom on Monday.  Near-term, there is a high probability of rapid rallies and retreats between 2740 and 3050.  Short-term traders can play the range but the market is volatile and tight stops are advisable.