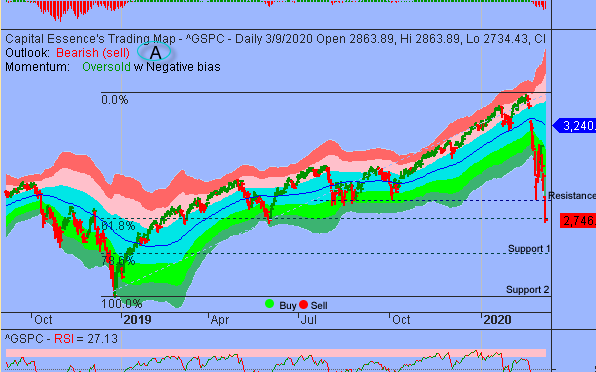 We’ve noted in the previous Market Outlook that: “our near-term work on momentum and price pattern suggested that the S&P may retest its February low of 2855 before rebounding.”  As expected, stocks tumbled out of gate Monday that saw the S&P undercut the February low, triggered trading halts put in place in the wake of 1987’s “Black Monday” crash.  The bench mark gauge plunged 7.6 percent to 2,746.56 as recession worries loomed large amid tumbling oil prices and ongoing coronavirus fears prompted investor panic on the anniversary of the U.S. stock market’s longest-ever bull run.  The Dow dropped 7.79 percent to 23,851.02.  The Nasdaq Composite fell 7.29 percent to 7,950.68.  The CBOE Volatility Index (VIX), widely considered the best gauge of fear in the market, soared 30 percent to close at 54.46.

In tech, FANG stocks were shunned, with Apple (AAPL) leading the decline as the hit to iPhone sales in China from the outbreak could be worse than feared.  Apple sold 494,000 iPhones last month, down from 1.27 million a year earlier, Wedbush said, citing initial data Chinese Academy of Information and Communications Technology’s. It closed down nearly 8 percent.  As such, the Technology Select Sector SPDR ETF (XLK) dropped 7.59 percent on the day and is down more than 10 percent YTD, outperformed the S&P.  Now the question is what’s next?  Below is an update look at a trade in XLK. 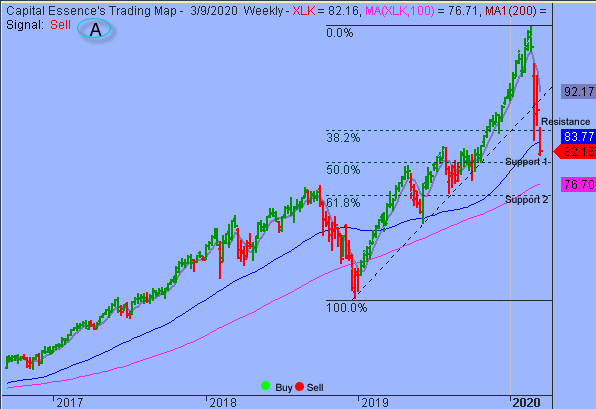 Our “U.S. Market Trading Map” painted XLK bars in red (sell) – see area ‘A’ in the chart. Over the past few weeks, XLK has been trending lower in a short-term corrective mode after the 2019 rally ran out of steam just above the 100 mark.  This week’s selloff pushed the ETF below the 1-year moving average, a key technical level based on moving averages.  This is a negative development, suggesting that the ETF might have to move to a much lower level to attract new buyers.  Right now the most important to watch is the 80 zone.  That level roughly corresponds with the 50% Fibonacci retracement of the 2019-2020 upswing.  A close below that level on a weekly basis will bring the 77-75 zone into view.

XLK has resistance near 90.  Short-term traders could use that level as the logical level to measure risk against. 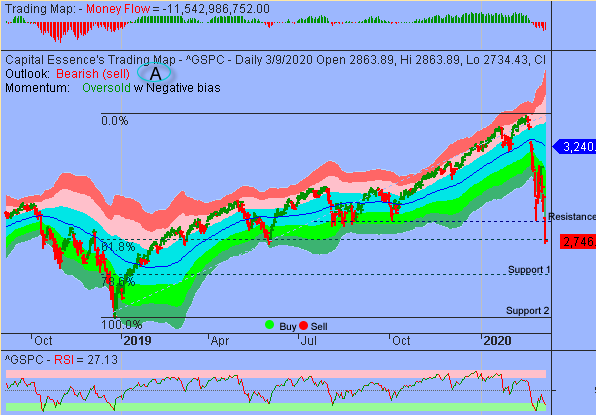 As expected, the S&P moved down to test support at the prior low set in late February after last week’s recovery rally ran out of steam near the upper boundary of the green band, around 3140. Monday’s massive selloff pushed the index below bottom of its short-term trading range and down to the 61.8% Fibonacci retracement of the late 2018-2020 upswing, around 2740.  This level is significant in charting terms.  A failure to hold above it suggests that the entire trend will eventually retrace.  With that said, a failure to hold above 2740 has measured move to 2560-2346, or the 78.6% Fibonacci retracement and the late 2018 low.

While the near-term technical bias skews toward further weakness, Monday’s selloff appeared to be overextended so it should not be surprised to see a quick snap back in the coming days.  Nonetheless, given the damages done over the past few days, rally could be short lived and should be sold.

If the market is going to find a bottom in the near term, we want to see the S&P regroup and climbed above 2855, or the bottom of its short-term trading range.  Staying below that level heralds more losses.

In summary, Monday’s bearish breakdown signify an imminent major trend reversal. While there seems to be room to go lower, the selloff is overextended from a short-term perspective so it should not be surprised to see a quick snap back in the coming days.  Nonetheless, given the damages done over the past few days, rally will be short lived and should be sold.