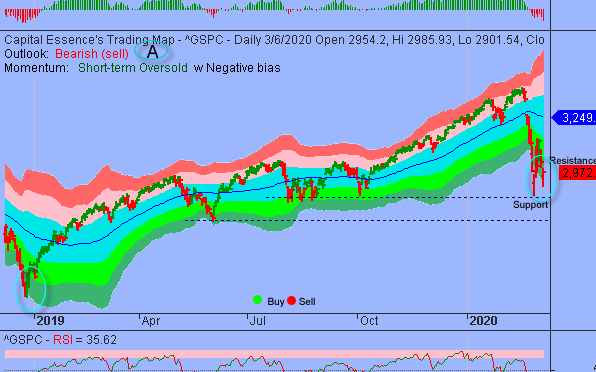 We’ve noted in the previous Market Outlook that: “market internal deteriorated as S&P moved down to test support at the important sentiment 3000 mark, which needs to hold on a weekly closing basis, according to our work, in order to prevent a test of secondary support in the 2850 area.”  As expected, stocks tumbled out of gate Friday as fears of economic damage from the spread of the coronavirus intensified that saw the S&P undercut 3000 and traded as low as 2901 before buyers stepped in and pushed prices off the intraday low.  For the day, the bench mark gauge dropped 1.7 percent to 2,972.37, while the Nasdaq Composite tumbled 1.8 percent to 8,575.62.  The Dow Jones Industrial Average dropped 0.9 percent to 25,864.78.   The CBOE Volatility Index (VIX), widely considered the best gauge of fear in the market, jumped about 6 percent to close at 41.94.

Investors continued to seek safer assets amid fears that the coronavirus will disrupt global supply chains and tip the economy into a recession. Utilities had its best week since the financial crisis. As such, the Utilities Select Sector SPDR ETF (XLU) surged nearly 8 percent on the week and is up about 4 percent YTD, outperformed the S&P.  Now the question is whether the rally has legs?  Below is an update look at a trade in XLU. 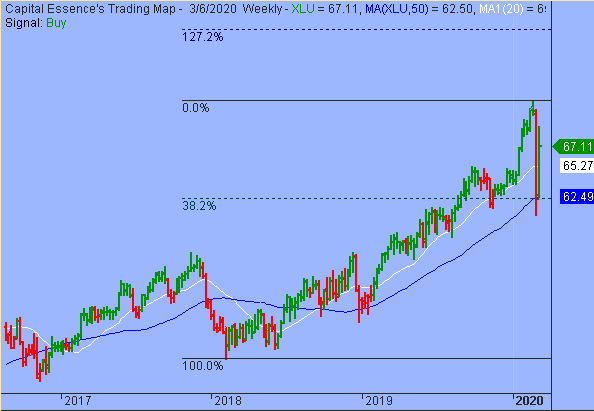 Our “U.S. Market Trading Map” painted XLU bars in green (buy) – see area ‘A’ in the chart. XLU moved down to test support at the 1-year moving average, a key technical level based on moving average, after the January rally ran out of steam near the 71 zone.  That level roughly corresponds with the 38.2% Fibonacci retracement of the 2018-2020 upswing.  Last week’s bullish reversal suggested that the support would hold.  This is a plosive development, opened up for a rest of the January high, just above 71.  A sustain advance above that level could trigger acceleration toward the 127.2% Fibonacci extension, just above 76.  An upside follow-through this week will confirm this.

XLU has support near 62.  Short-term traders could use that level as the logical level to measure risk against. 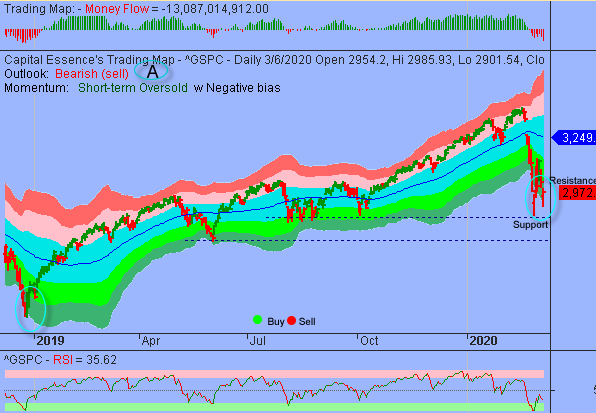 As expected, the S&P moved down to test support at the prior low set in late February after last week’s recovery rally ran out of steam near the upper boundary of the green band, around 3140. The index fell below the bottom of its short-term trading range in early Friday session before cut losses rapidly in the final 30 minutes of trading.  It seems to us that the market is desperately trying to form a new trading range.

Momentum indicator shifted lower from near oversold zone, suggesting further short-term weakness likely.  Money Flow measure trended lower from below the zero line, indicating a negative net demand for stocks.  The indicator is at the lowest level going back to late 2018.  While the near-term technical bias skews toward further weakness, we expect extreme daily whipsaws eventually eases as the range tightens.

If the market is going to find a bottom in the near term, we want to see the S&P regroup and climbed above 3050, or the lower boundary of the green band. With that said, if the S&P fails to close above 3050, then the next stop will be 2855 with the possibility of a major correction to 2640.

On the upside, S&P has 3140 to trade against.  A sustain advance above that level suggests that an important near-term low has been established and triggers acceleration toward 3250.

In summary, our near-term work on momentum and price pattern suggested that the S&P may retest its February low of 2855 before rebounding. While the near-term technical bias skews toward further weakness, we expect extreme daily whipsaws eventually eases as the range tightens.