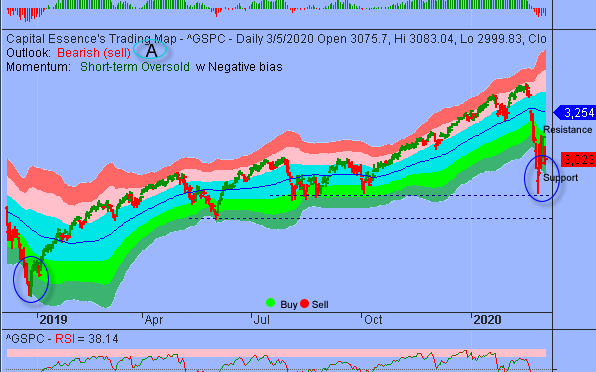 Stocks plunged on Thursday, erasing most of the steep gains in the previous session, as fears about the coronavirus disrupting the global economy continued to grip Wall Street. California declared a state of emergency after a coronavirus-related death and 53 confirmed cases in the state. The number of infections in New York also doubled overnight to 22 as the state ramps up its testing. For the day, the Dow Jones Industrial Average tumbled 3.5 percent to 26,121.28. The S&P 500 dropped 3.3 percent to 3,023.94 and the Nasdaq Composite fell 3.1 percent to 8,738.60.  The CBOE Volatility Index (VIX), widely considered the best gauge of fear in the market, surged nearly 24percent to close at 39.62.

Airline stocks also took a huge beating, leading the declines in the Dow Jones Transportation Average, which dipped into bear market territory Thursday. United Airlines cratered 13.4 percent, while American Airlines tanked 13.2 percent, suffering its worst day since 2016.  As such, the SPDR S&P Transportation ETF (XTN) tumbled 6.52 percent on the day and is down more than 19 percent YTD, significantly underperformed the S&P.  Now the question is what’s next?  Below is an update look at a trade in XTN. 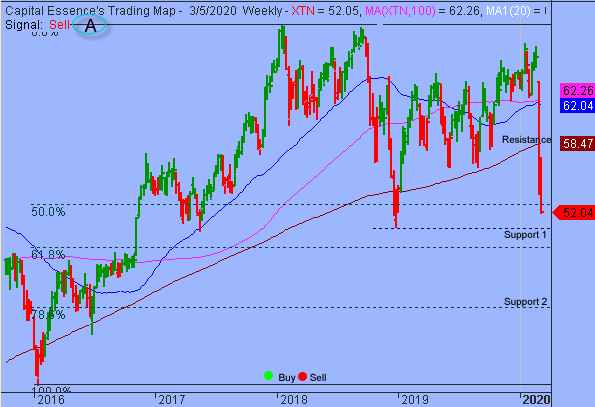 Our “U.S. Market Trading Map” painted XTN bars in red (sell) – see area ‘A’ in the chart. Over the past few weeks, XLV has been trending after early January rally ran out of steam just below prior high set in 2018.  This week’s downside follow-through confirmed last week’s bearish break below the 4-year moving average, a key technical level based on moving average, and also pushed the ETF below the 50% Fibonacci retracement of the 2016-2018 upswing.  This is a bearish development, opened the door for a test of the 50.50-48.50 zone, or the late 2018 low and the 61.8% Fibonacci retracement.  A failure to hold above 48.50 has measured move to around 43, based on the 78.6% Fibonacci retracement.

XTN has resistance near 58.50.  Short-term traders could use that level as the logical level to measure risk against. 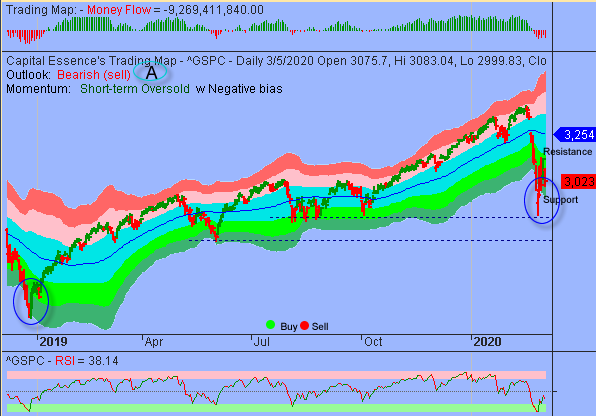 S&P rolled over after Wednesday’s recovery rally failed at the upper boundary of the green band, the level that held in the first rally attempt on Tuesday.  Selling began to accelerate as the index briefly fell below 3000.  That level was significant when the S&P fell below it last week and climbed above it on Monday. This history indicated an important role in term of support.  If the market is going to find a bottom in the near term, we want to see the S&P regroup and climbed above 3050, or the lower boundary of the green band. With that said, if the S&P fails to close above 3050 on Friday, then the next stop will be 2855 with the possibility of a major correction to 2700.

On the upside, S&P has 3130 to trade against.  A sustain advance above that level will trigger acceleration toward 3250 but it’s not expected this week.

In summary, market internal deteriorated as S&P moved down to test support at the important sentiment 3000 mark, which needs to hold on a weekly closing basis, according to our work, in order to prevent a test of secondary support in the 2850 area.  If the market is going to find a bottom in the near term, we want to see the index regroup and climb above the lower boundary of the green band, around 3050.