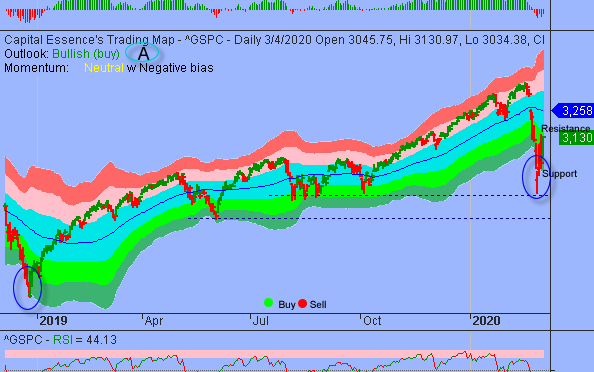 Stocks surged on Wednesday as major victories from former Vice President Joe Biden during Super Tuesday sparked a massive rally within the health-care sector.  The Dow Jones Industrial Average soared 4.5 percent to 27,090.86. The S&P jumped 4.2 percent to 3,130.12, while the Nasdaq Composite advanced 3.8 percent to 9,018.09.  The CBOE Volatility Index (VIX), widely considered the best gauge of fear in the market, tumbled more than 13 percent to close at 31.99.

Healthcare stocks surged as Biden emerged as the front-runner in a narrowing race for the Democratic presidential nomination following a string of primary victories, providing relief to market participants who are wary of the more progressive policy positions of rival Bernie Sanders, a self-described democratic socialist. Sanders’ embrace of a Medicare for All healthcare policy that would essentially abolish private insurance had cast a shadow on healthcare stocks.  UnitedHealth and Centene jumped 10.7 percent and 15.6 percent, respectively.  As such, Health Care Select Sector SPDR ETF (XLV) surged 5.76 percent on the day but is down about 2 percent YTD, slightly outperformed the S&P.  Now the question is whether the rally has more legs?  Below is an update look at a trade in XLV. 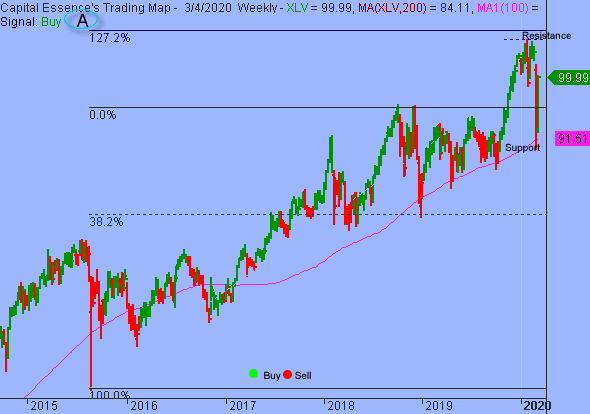 Our “U.S. Market Trading Map” painted XLV bars in green (buy) – see area ‘A’ in the chart. Over the past few weeks, XLV has been trending lower in a short-term corrective mode after the October rally ran out of steam just below the 127.2% Fibonacci extension of the 2015-2018 upswing.  The correction tested and bounced support at the 2-year moving average, the level that offered support since the ETC reached an interim low in late 2018.  This is a positive development.  A close above 100 on a weekly basis will confirm the bullish reversal signal and open up for a rest of the 105-107 zone, or the early 2020 high and the 127.2% Fibonacci extension.

XLV has support near 91.50.  Short-term traders could use that level as the logical level to measure risk against. 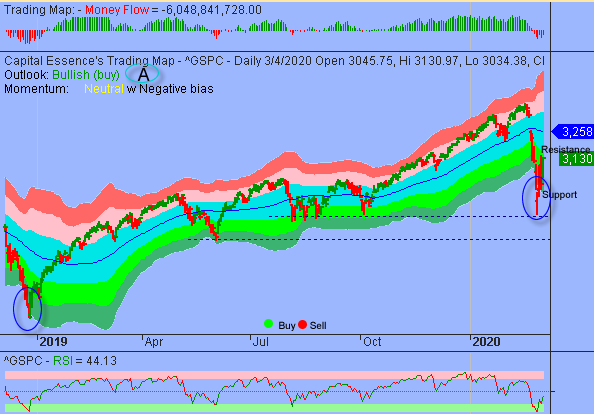 As expected, the S&P bounced off support at the bottom of its short-term trading range as traders reacted to oversold conditions. That level is significantly in charting terms.  As shown, the index rallied to new high in about 4 months after a briefly fell below that level in late December 2018.  Momentum indicator shifted higher from near oversold zone, allowing additional upside probing.  These elements increased the probability for a test of resistance around the 3170 zone.  Traders however, must be mindful that Money Flow measure is below the zero line, indicating a negative net demand for stocks. So, it will be important to monitor the rallies and retreats behaviors over the next few days to determine whether Wednesday’s turnaround is legit.

On the downside, S&P has 3000 to trade against.  A failure to hold above that level will trigger a new wave of selling interest with downside target around 2850

In summary, based upon recent trading actions, an important near-term low has been established and the S&P is in an early stage of a new upswing that projects to 3170 at minimum but has an overshot target near 3250.