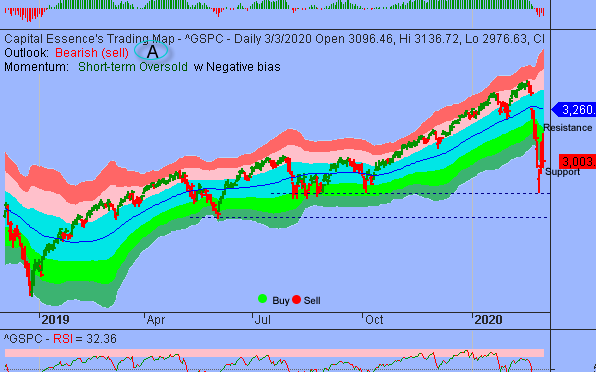 We’ve noted in the previous Market Outlook that: “our near-term work on price structure and momentum suggested that the S&P is in an early stage of a short-term oversold bounce. The index has 3100 to trade against.”  As anticipated, S&P initially rose more than 2 percent in early Tuesday session on the Fed’s surprise rate cut. But after brief rally that saw the bench mark gauge traded as high as 3136, the market reversed and followed Treasury yields lower.  For the day, the S&P fell 2.8 percent to 3,003.37 while the Nasdaq Composite pulled back 3 percent to 8,684.09.  The Dow Jones Industrial Average fell nearly 3 percent to 25,917.41.  The CBOE Volatility Index (VIX), widely considered the best gauge of fear in the market, surged more than 10 percent to close at 36.82.

Lower interest rates are typically a headwind for banks, weighing on net interest margin, the difference between the interest income generated by banks and the amount of interest paid out to their lenders.  JPMorgan (JPM), Goldman Sachs (GS), and Bank of America (BAC) fell sharply, with the latter down more than 5 percent.  As such, the Financial Select Sector SPDR ETF (XLF) tumbled 3.76 percent on the day and is down more than 12 percent YTD, underperformed the S&P.  Now the question is what’s next?  Below is an update look at a trade in XLF. 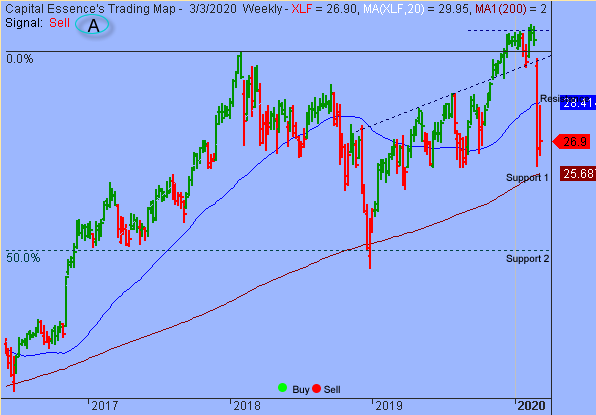 Our “U.S. Market Trading Map” painted XLF bars in red (sell) – see area ‘A’ in the chart. Over the past few weeks, XLF has been trending lower in a short-term corrective mode after the October rally ran out of steam just above the prior high set in early 2018.  The correction tested and bounced support at the 4-year moving average, a key technical level based on moving averages.  This week’s rebound tested and failed near the 1-year moving average.  This is a negative development, suggesting that XLF might have to move to a much lower level to attract new buyers.  Right now the most important thing to watch is trading behavior near 25.68.  A close below that lvel on a weekly basis has measured move around 22.60, or the 50% Fibonacci retracement of the 2015-2018 upswing.

XLF has resistance near 28.40.  Short-term traders could use that level as the logical level to measure risk against. 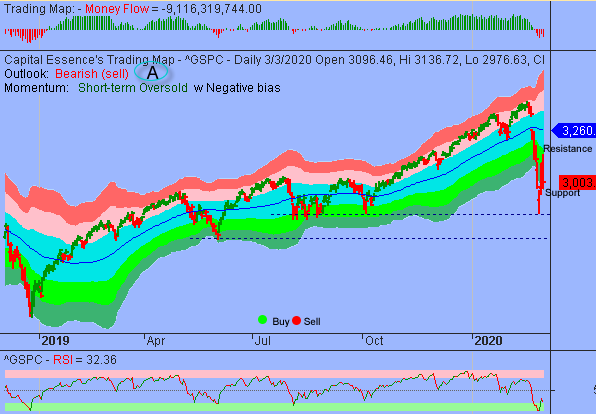 Momentum indicator shifted lower from near oversold zone, indicating an internal weakness.  Over the next few day, it’d be important to monitor trading behavior as the 2950-2850 zone is tested as support.  A close below 2850 would open the flood gate toward the early June 2019 low, around 2730.

On the upside, S&P has 3170 to trade against.  A sustain advance above that level will bring the trend channel moving average, currently at 3260, into view.

In summary, market internal deteriorate as S&P moved down to test support at the bottom of its short-term trading range. That level roughly corresponds with the important sentiment 3000 mark.  The longer the index stays near that level, the more vulnerable it is to lower prices.  This is the real danger in the current market.