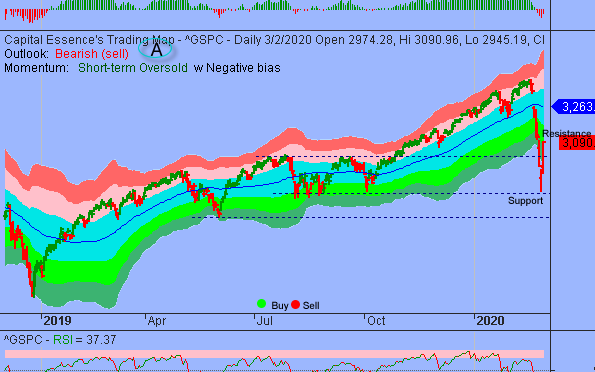 We’ve noted in the previous Market Outlook that: “S&P entered period of higher volatility.  The market is extremely oversold following last week’s massive selloff. While there is a high probability that Friday’s late-day rally will momentum, a close above S&P’s 3000 is needed before there is any real prospect of a change in the short-term downward trend pressure.”  As anticipated, growing bets the Federal Reserve will cut rates aggressively this month, investors piled into stocks, especially in late trading. The major indexes closed at their highs of the session.  For the day, the S&P climbed 4.6 percent to 3,090.23.  The Nasdaq Composite surged 4.5 percent to 8,952.16.  The Dow Jones Industrial Average jumped 5.1 percent to 26,703.32.  The CBOE Volatility Index (VIX), widely considered the best gauge of fear in the market, dropped more than 16 percent to close at 33.42.

Tech stocks, led by Apple (AAPL), staged comeback amid signs of a slowdown in infections in China and growing investor bets on global central banks adopting aggressive stimulus measures to cushion the impact on from the coronavirus on economic growth.  As such, the Technology Select Sector SPDR ETF (XLK) jumped 5.78 percent on the day and is up 2 percent YTD, outperformed the S&P.  Now the question is whether the rally has more legs?  Below is an update look at a trade in XLK. 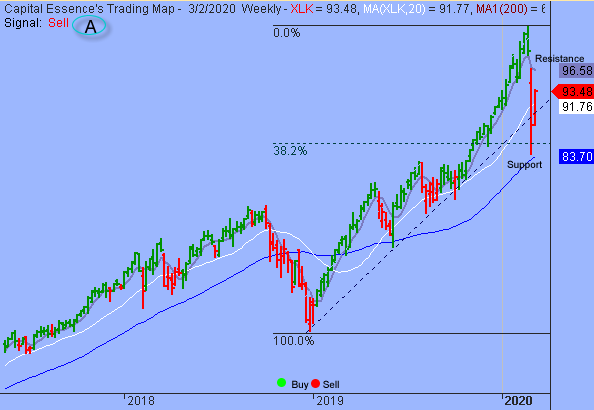 Our “U.S. Market Trading Map” painted XLK bars in red (sell) – see area ‘A’ in the chart. Over the past few weeks, XLK has been trending lower in a short-term corrective mode as it worked off overbought conditions.  The correction tested and respected support at the 1-year moving average, a key technical level based on moving averages.  This is a positive development, but XLK has 96 to trade against.  There is no reason to turn particular bullish until this zone is eclipsed.

XLK has resistance near 96.  Short-term traders could use that level as the logical level to measure risk against. 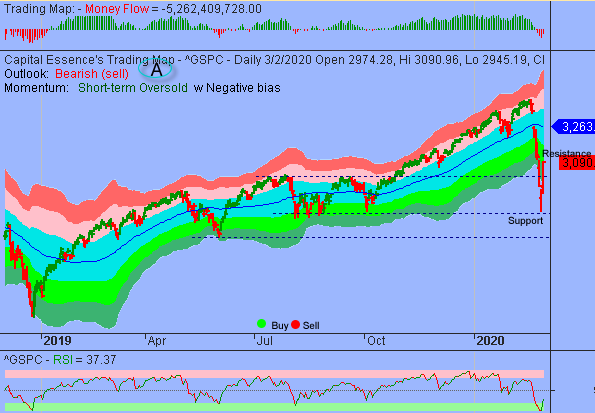 Monday’s massive reversal suggested that the August-October 2019 lows, around 2850, would hold, at least for the time being.  Momentum has been strengthened, allowing additional short-term upside probing.  Nevertheless, Money Flow measure is below the zero line, indicating a negative net demand for stocks.  This will put a cap on the upside.  Right now, follow-through is the key.  A consecutive close above 3000 will confirm Monday’s bullish reversal signal and open up for a test of the more important resistance near 3170.

In summary, our near-term work on price structure and momentum suggested that the S&P is in an early stage of a short-term oversold bounce. The index has 3100 to trade against.  A sustain advance above that level will turn the short-term trend up and trigger acceleration toward 3170.