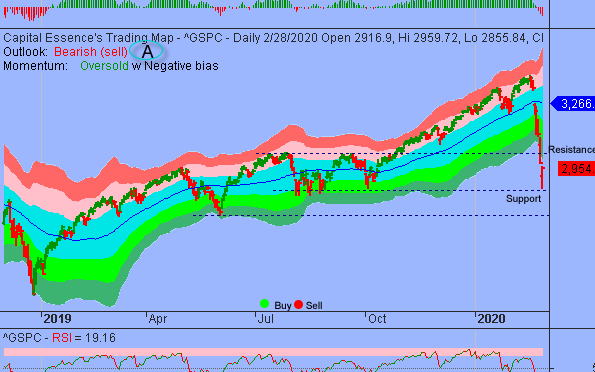 We’ve noted in the previous Market Outlook that: “Thursday’s massive selloff felt like a possible capitulation point.  Like a rubber band, stocks tend to snap back to the mean if they have dropped too far from the “fair” value. With that said, if lower stock prices create some values for investors, then, given everything being equal, the market should be able to find some buyers.  However, give the significant damage that had been done over the past few days, we may need to see more evidence of exhaustive selling to suggest that near-term risks are ebbing.”  As anticipated, the S&P plunged in early Friday session, down more than 3 percent amid fear over the economic fallout from the spreading coronavirus before buyers stepped in and pushed prices off intraday low.  For the day, the bench mark gauge slid 0.8 percent to 2,954.22. The Nasdaq Composite closed flat at 8,567.37 but fell as much as 3.5 percent on the day.  The Dow Jones Industrial Average dropped 1 percent to 25,409.36.  The CBOE Volatility Index (VIX), widely considered the best gauge of fear in the market, rose more than 2 percent to close at 40.11.

Banks led the sell-off, with JPMorgan (JPM) sinking 6 percent, as travel restrictions took hold and trading floors scrambled for contingency plans if offices are required to close.  As such, the Financial Select Sector SPDR ETF (XLF) fell 2.7 percent on the day and is down more than 13 percent YTD, underperformed the S&P.  Now the question is whether this week’s selloff is a pause that refreshes or there’re more pains ahead?  Below is an update look at a trade in XLF.

Our “U.S. Market Trading Map” painted XLF bars in red (sell) – see area ‘A’ in the chart. Over the past few weeks, XLF has been basing sideways near the 31 zone as it works off overbought conditions.  Last week’s selloff pushed the ETF below several key support levels.  This is a negative development and opened the door for a test of support at the 4-year moving average, around 25.60. That level was tested several times over the past years.  So it should not be surprised to see XLF regroup and rebound from near 25.  A failure to hold above 25 on a weekly basis has measured move to 22.70, or the 50% Fibonacci retracement of the 2015-2018 upswing.

XLF has resistance near 27.  Short-term traders could use that level as the logical level to measure risk against. 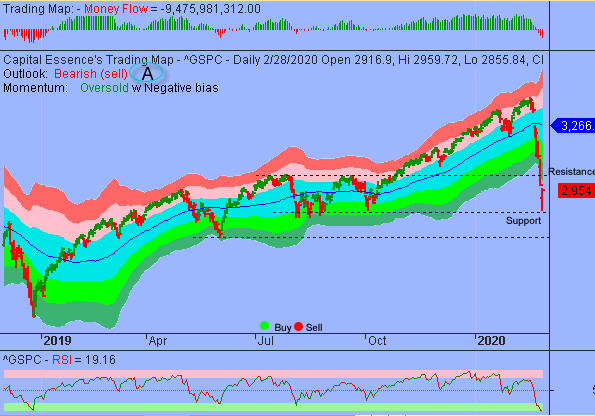 S&P moved down to test support at the August-October 2019 lows after falling below the bottom of its short-term trading range on Thursday.  As mentioned, while it’s uncommon the S&P to break below the bottom of its short-term trading range, such a move lower is often followed by a quick snap back.  As indicated in the above chart, the index broke below the bottom of its short-term trading range in late December 2018, only to bounce back up.  So it shouldn’t be surprised to see at least an attempt to rally over the next few days. Nonetheless, given the damages done over the past week, there is no commitment to accumulation stocks aggressively at this point. The S&P has 2900 to trade against.  A failure to hold above that level will bring the April 2019 low, around 2700, into view.

In summary, S&P entered period of higher volatility.  The market is extremely oversold following last week’s massive selloff. While there is a high probability that Friday’s late-day rally will momentum, a close above S&P’s 3000 is needed before there is any real prospect of a change in the short-term downward trend pressure.