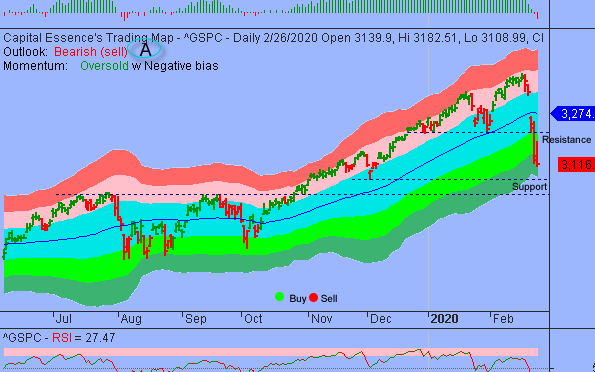 We’ve noted in the previous Market Outlook that: “S&P broke several supports this week.  When key supports broke it means that long-term buying pressure has finally been exhausted.  The stronger the support, the more powerful the selloff.  Nevertheless, support is strong near the 3100 zone.  This could help minimize downside follow-through and widespread breakdowns.”  As anticipated, the S&P struggled Wednesday, giving up very strong gains to close in the red again as signs the spread of the coronavirus outside mainland in China is gathering pace.  The bench mark gauge fell 0.4 percent to 3,116.39 after rallying more than 1 percent to start off Wednesday’s session.  The Dow Jones Industrial Average dropped 0.5 percent to 26,957.59.  The Nasdaq Composite added 0.2 percent to 8,980.77 after rising as much as 2 percent. The CBOE Volatility Index (VIX), widely considered the best gauge of fear in the market, fell 1 percent to close at 27.56.

Another issue that could be spooking investors is the rise of Vermont Sen. Bernie Sanders, whose win in the Nevada caucuses last week firmly made him the front-runner in the Democratic presidential primary. Many health care stocks fell this week after the big win for Sanders, whose Medicare-for-all plan would move Americans onto a government-run health insurance program and eliminate private insurance. So far this week, Centene Corp. (CNC) tumbled nearly 17 percent, Humana Inc. (HUM) fell more than 11 percent and UnitedHealth Group Inc. (UNH) dropped more than 12 percent.  As such, the Health Care Select Sector SPDR ETF (XLV) fell more than 6 percent since Monday and is down about 5 percent YTD, underperformed the S&P.  Now the question is whether this week’s selloff is a pause that refreshes or there’re more pains ahead?  Below is an update look at a trade in XLV. 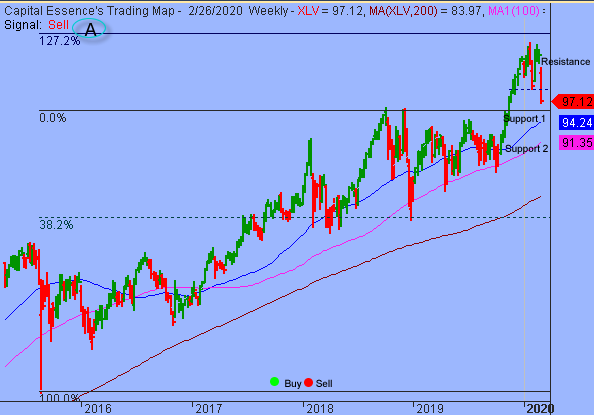 Our “U.S. Market Trading Map” painted XLV bars in red (sell) – see area ‘A’ in the chart. Over the past few weeks, XLV has been basing sideways near the 127.2% Fibonacci extension of the 2015-2018 upswing as it worked off overbought conditions.  This week’s selloff pushed the ETF below the late January low, signify a bearish breakout and downside reversal. Right now the most important thing to watch is trading behaviors near the 96 zone, or the late 2019 breakout point.  A failure to hold above that level has measured move to around 92.

XLV has resistance near 102.  Short-term traders could use that level as the logical level to measure risk against. 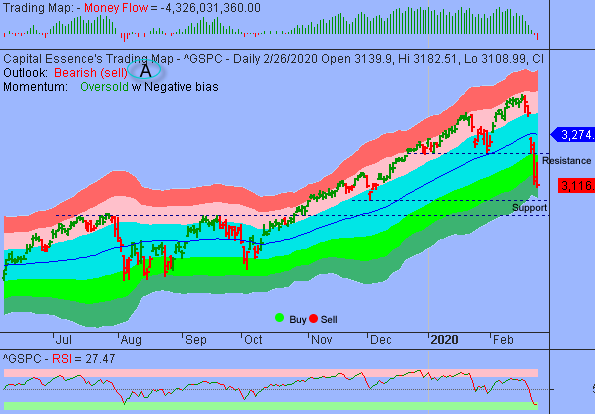 As expected, S&P moved up to test resistance at the important sentiment 3200 mark in early Wednesday session.  That level was significant when the index fell below it on Tuesday.  Money Flow measure trended lower from below the zero line, indicating a negative net demand for stocks.  Momentum indicator is at the lowest level going back to late 2018.  These elements will continue negatively affect trading sentiment in the coming days.  Right now, the most important thing to watch is trading behaviors near 3100.  A failure to hold above that level suggests that most of the potential buyers at this level had already placed their bets and the index might have to go to much lower level to attract new buyers and we’re looking at 3000.

In summary, S&P is testing the important sentiment 3100 mark after breaking several supports this week.  So far, Wednesday’s rally attempt did not improve the posture of our short-term indicators, which remain supportive of further pullback.  S&P has 3100 to trade against.  If that were to break, we could see 3000 next.