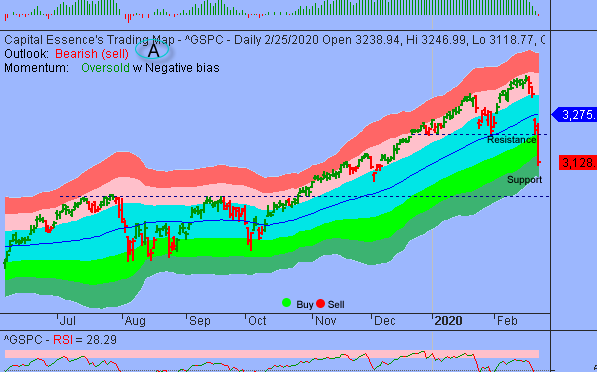 We’ve noted in the previous Market Outlook that: “S&P broke key supports Monday, signify a bearish breakout and downside reversal.  While several indicators remain supportive of further pullback, return of oversold conditions on an intraday basis will help putting a short-term floor under the market.  Like a rubber band, stocks tend to snap back to the mean if they have dropped too far from the “fair” value. So it should not be surprising to see at least an attempt to rally in the coming days.”  As anticipated, stocks opened higher in Tuesday session that saw the S&P traded as high as 3246 before sellers stepped in and pushed prices significantly lower.  Contributed to the overall pessimism was a warning from health authorities on the spread of the coronavirus.  The CDC said that Americans should prepare for the “inevitable” spread of Covid-19 and that there will be disruptions to everyday lives of Americans.

Traders were unnerved by the bond market, which pointed to slower economic growth around the world. The 10-year Treasury yield traded at 1.33 percent, hitting an all-time low.  The drop in yields pushed bank stocks lower. Bank of America fell more than 5 percent while JPMorgan Chase closed 4.5 percent lower.  Lower rates could hit bank profit margins.  As such, the Financial Select Sector SPDR ETF (XLF) tumbled 3.39 percent on the day and is down more than 6 percent YTD, underperformed the S&P.  Now the question is whether this week’s selloff is a beginning of an end or there’re more pains ahead?  Below is an update look at a trade in XLF. 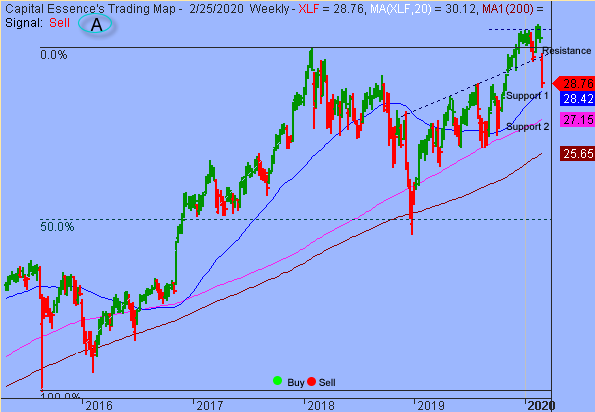 Our “U.S. Market Trading Map” painted XLF bars in red (sell) – see area ‘A’ in the chart. Over the past few weeks, XLF has been basing sideways near the 31 zone as it worked off overbought conditions.  This week’s selloff pushed the ETF below the 2019 rising trend line.  That level was significant when XLF climbed above it in late 2019.  This is a negative development, suggesting that XLF might have to move to a much lower level to attract new buyers. Right now the most important thing to watch is trading behaviors near the 28.50 zone, or the 1-year moving average.  A failure to hold above that level has measured move to around 27.

XLF has resistance near 30.20.  Short-term traders could use that level as the logical level to measure risk against. 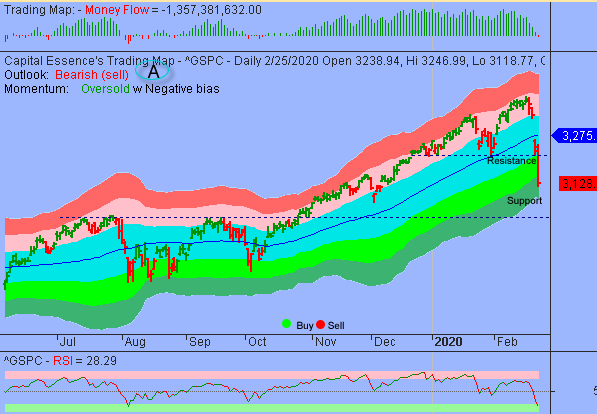 S&P undercut support at January low after the early rally attempt ran out of steam near 3250.  Money Flow measure crossed below the zero line, indicating a negative net demand for stocks.  This is a negative development but let’s notice that Tuesday’s selloff pushed the S&P below the green band and into extreme oversold zone. The market has historically developed significant near-term low around that area.  Additionally, momentum indicator has reached the level that had been successful in repelling price actions in the past. These elements suggested that the index might regroup and rebound from near 3100.  This is a very strong support zone.  A failure to hold above that level will bring the October breakout point, near 3000, into view.

In summary, S&P broke several supports this week.  When key supports broke it means that long-term buying pressure has finally been exhausted.  The stronger the support, the more powerful the selloff.  Nevertheless, support is strong near the 3100 zone.  This could help minimize downside follow-through and widespread breakdowns.