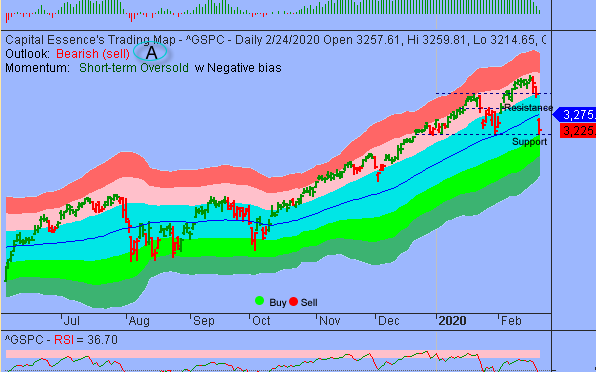 We’ve noted in the previous Market Outlook that: “market internal deteriorated as S&P moved down to test support near the 3320 zone.  A failure to hold above key price level means that long-term buying pressure has finally been exhausted.  On balance, we remain near-term negative for S&P as we believe market vulnerable to some downside retracement over the short-to-intermediate term.”  As anticipated, S&P suffered a biggest daily loss in two years on Monday, paced by a selloff in energy and tech stocks on worries about a potential coronavirus pandemic outbreak. For the day, the bench mark gauge slid 3.35 percent to 3,225.89 while the Nasdaq Composite declined 3.71 percent to 9,221.28.  The Dow Jones Industrial Average tumbled 3.56 percent to 27,960.80.  The CBOE Volatility Index (VIX), widely considered the best gauge of fear in the market, surged more than 46 percent to close at 25.03.

With fears rising that the window of opportunity to contain the virus may have been missed and of a longer-than-expected return to normal operations for supply chains in China, investors abandoned travel stocks.  Airline stocks Delta and American were both down more than 6 percent while United closed 5.4 percent lower.   As such, the U.S. Global Jets ETF (JETS) tumbled 5.89 percent on the day and is down more than 9 percent YTD, underperformed the S&P.  Now the question is whether this week’s selloff is a beginning of an end or there’re more pains ahead?  Below is an update look at a trade in JETS. Our “U.S. Market Trading Map” painted JETS bars in red (sell) – see area ‘A’ in the chart. Over the past few weeks, JETS has been basing sideways using the 2-year moving average as support as traders digested the late 2019 run.  This week’s selloff pushed the ETF below the 29 zone, the area that offered support since early 2020.  This is a negative development, suggesting that JETS might have to move to a much lower level to attract new buyers. JETS has minor support near 28, or the May-October 2019 lows.  A failure to hold above that level will bring the early 2019 low, around 26.50, into view.

JETS has resistance near 30.  Short-term traders could use that level as the logical level to measure risk against. Key technical development in Monday session was a close below the trend channel moving average, the level that offered support since the S&P broke out in October 2019.  Momentum indicator is much closer to oversold territory following recent selloff, suggesting downside risk could be limited.  Perhaps the positive Money Flow measure is the best illustration of the bull’s case. So it should not be surprising to see at least an attempt to rally in the coming days.  As for support, 3200 is the line in the sand.  We’d turn particular bearish if S&P closes twice below that level.

In summary, S&P broke key supports Monday, signify a bearish breakout and downside reversal.  While several indicators remain supportive of further pullback, return of oversold conditions on an intraday basis will help putting a short-term floor under the market.  Like a rubber band, stocks tend to snap back to the mean if they have dropped too far from the “fair” value. So it should not be surprising to see at least an attempt to rally in the coming days.