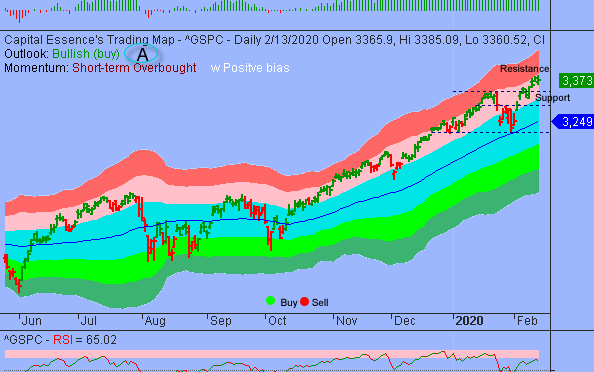 We’ve noted in the previous Market Outlook that: “although overbought condition is keeping buyers at bay, S&P’s 3400 continues to act as price magnet.  Short-term traders can anticipate increase short-term volatility with rapid up and down moves in the market.”  As anticipated, S&P slipped from record highs but ended the day well off of its lows Thursday after the World Health Organization suggested the spike in coronavirus infections may not have occurred in a day, easing fears of contagion.  For the day, the bench mark gauge fell 0.2 percent to 3,373.94 after notching an intraday record earlier in the session. The Nasdaq Composite gave up 0.1 percent to 9,711.97.  The Dow Jones Industrial Average slid 0.4 percent to 29,423.31.  The CBOE Volatility Index (VIX), widely considered the best gauge of fear in the market, rose 3 percent to close at 14.15.

The industrials sector was the biggest laggard in the S&P amid growing concerns about the spike in coronavirus infections and the virus’ possible economic impact.  The Chinese province at the center of the coronavirus outbreak reported a record rise in deaths and thousands more infections using a broader definition on Thursday.  As such, the Industrial Select Sector SPDR ETF (XLI) fell 0.6 percent on the day and is up 4 percent YTD, roughly in line with the S&P.  Now the question is whether recent pullback is a pause that refreshes or it’s a beginning of something worse?  Below is an update look at a trade in XLI. 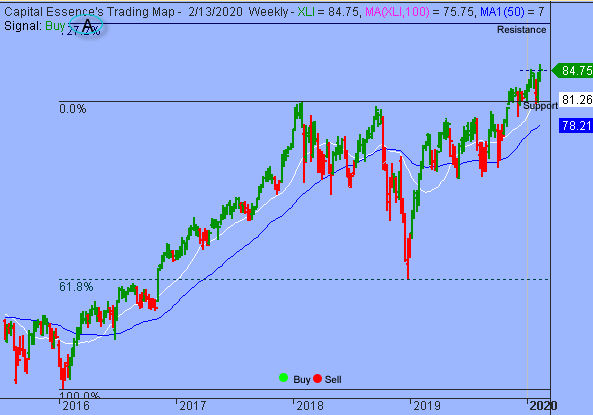 Our “U.S. Market Trading Map” painted XLI bars in green (buy) – see area ‘A’ in the chart. Over the past few weeks, XLI has been trending lower in a short-term corrective mode after the October 2019 rally ran out of steam near the 85 zone.  The January correction found support near the early November breakout point.  This week’s upside follow-through confirmed last week’s bullish reversal signal.   This is a positive development, opened up for a test of the more important resistance near the 90 zone, or the 127.2% Fibonacci extension.

XLI has support near 81.  Short-term traders could use that level as the logical level to measure risk against. 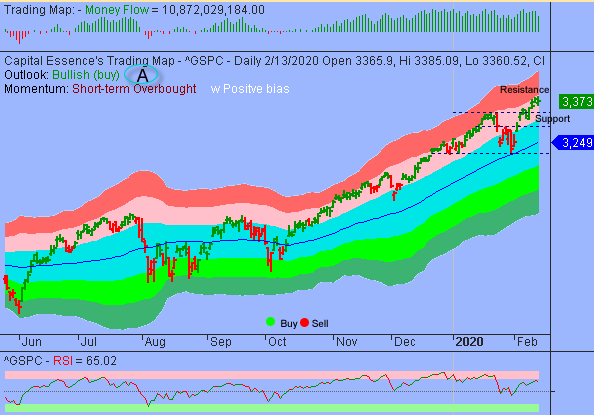 The big picture remains the same.  S&P continues basing sideways near the lower boundary of the red band after breakout above the prior high set in January earlier this week.  Money Flow measure is above the zero line, indicating a positive net demand for stocks.  The fact that buying pressure has been strengthened as the S&P tested key price level suggested the market will take another leg higher as soon as it works off excessive optimism.  While more backing and filling would not be a surprise, a failure to hold above 3358 would see a massive pickup in volatility.  We’d turn particularly bearish if the index closes twice below that level.  With that said if the S&P could hold above 3350 then a move above 3400 would be easier to be achieved.

In summary, the big picture remains the same. There is an orderly high level consolidation, which represents digestion period.  The fact that the index managed to hold on to most of recent gain in the face of such extreme overbought condition, indicating an internal strength.  This increases the probability that the S&P will break out to new highs as soon as the market shakes off the excessive bullishness.