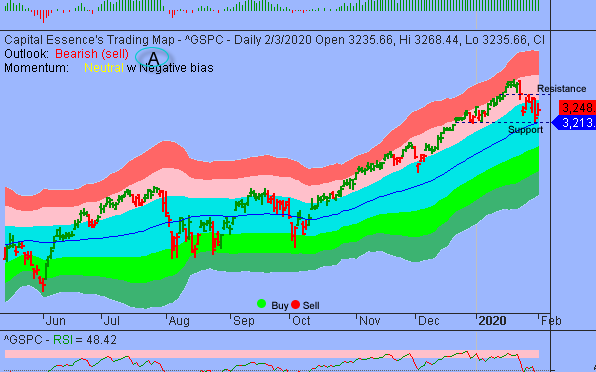 We’ve noted in the previous Market Outlook that: “our near-term work on price pattern and momentum suggested that the S&P is in a midst of a short-term overbought correction.  Money Flow measure and momentum had been deteriorated following recent selloff.  We expect increase in near-term volatility as the index tests support at the 3200 zone. This area is too big and too important to fall quickly so it should not be surprising to see some backings and fillings in the coming days.”  As anticipated, stocks rose solidly on Monday, recovering some of the losses from the previous session’s steep sell-off.  The S&P gained 0.7 percent to 3,248.92.  The Dow Jones Industrial Average added 0.5 percent to 28,399.81 while the Nasdaq Composite was up 1.3 percent to 9,273.40.  The CBOE Volatility Index (VIX), widely considered the best gauge of fear in the market, fell more than 4 percent to close at 17.97.

Oil fell to its lowest level in more than a year on Monday as the coronavirus outbreak and its potential impact on demand further hammered crude prices.  U.S. West Texas Intermediate fell 2.8 percent, or $1.45 per barrel, to settle at $50.11 per barrel. Earlier in the session, WTI fell more than 3 percent to $49.92, its lowest level since Jan. 2019.  As such, the Energy Select Sector SPDR ETF (XLE) fell 1.31 percent on the day and is down more than 12 percent YTD, underperformed the S&P.  Now the question is whether recent selloff is an end of a major downswing or there’re more pains ahead?  Below is an update look at a trade in XLE. 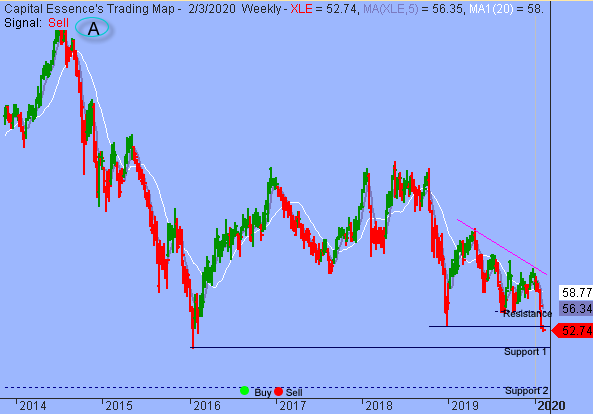 Our “U.S. Market Trading Map” painted XLE bars in red (sell) – see area ‘A’ in the chart. XLE sold off sharply after the October recovery rally ran out of steam near the 2019 falling trend line.  The January down leg pushed the ETF down to the 2019 lows.  This selloff broke support at the early 2019 low, signify a bearish breakout.  A close below 53 on a weekly basis will confirm this and a test of the 2016 low, around 50, should be expected.  Below that level, there is no significant support until 44, or the summer 2009 low.

XLE has resistance near 56.  Short-term traders could use that level as the logical level to measure risk against. 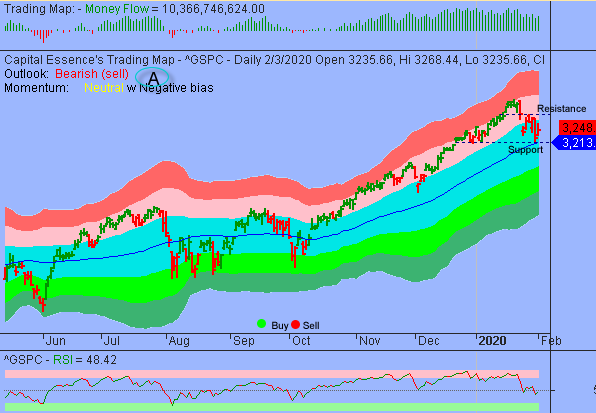 As expected, the S&P rebounded nicely off support at the trend channel moving average.  Monday’s recovery rally tested resistance at the lower boundary of the pink band.  That level was significant when the index fell below it last week.  It’s now acting as strong resistance.  Momentum has been strengthened but does not appear strong enough to generate widespread breakouts.  While more backing and filling would not be a surprise, a close above the lower boundary of the pink band, currently at 3280, it is required to neglect the medium-term downward trend pressure.  There is a no reason to turn particularly bullish until this area is eclipsed.

In summary, Monday’s recovery rally is testing ‘support turned resistance’ near S&P’s 3280.  The short-term technical backdrop remains bearish.  The longer the index stays below that level, the more vulnerable it is to lower prices.