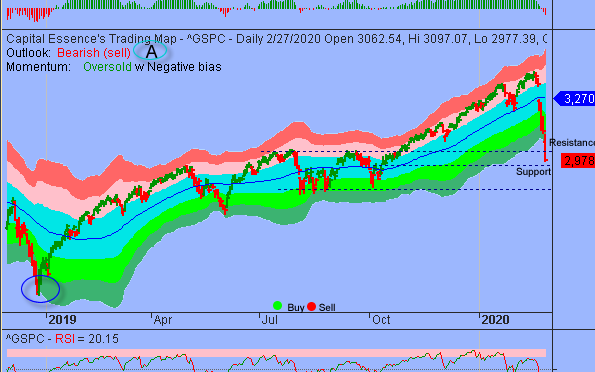 We’ve noted in the previous Market Outlook that: “S&P is testing the important sentiment 3100 mark after breaking several supports this week.  So far, Wednesday’s rally attempt did not improve the posture of our short-term indicators, which remain supportive of further pullback.  S&P has 3100 to trade against.  If that were to break, we could see 3000 next.”  As anticipated, the S&P plunged in late selling Thursday as fears of a global pandemic intensified.  The bench mark gauge is on pace for its worst weekly loss since the Financial Crisis as investors feared a jump in coronavirus infections in the U.S. could derail economic growth.  The S&P slid 4.4 percent to 2,978.76 while the Nasdaq Composite dropped 4.6 percent to 8,566.48.  The Dow Jones Industrial Average plummeted 4.4 percent to 25,766.64.  The CBOE Volatility Index (VIX), widely considered the best gauge of fear in the market, fell 1 percent to close at 27.56.

Tech played an influential role in the broader sell-off.  Mega-cap FANG stocks also extended losses, with Netflix (NFLX) unable to hold onto a bid earlier in the day despite expectations that prolonged periods of self- quarantine among the infected could boost user activity on the streaming platform.  As such, the Technology Select Sector SPDR ETF (XLK) tumbled 5.39 percent on the day and is down more than 4 percent YTD, slightly outperformed the S&P.  Now the question is whether this week’s selloff is a pause that refreshes or there’re more pains ahead?  Below is an update look at a trade in XLK. 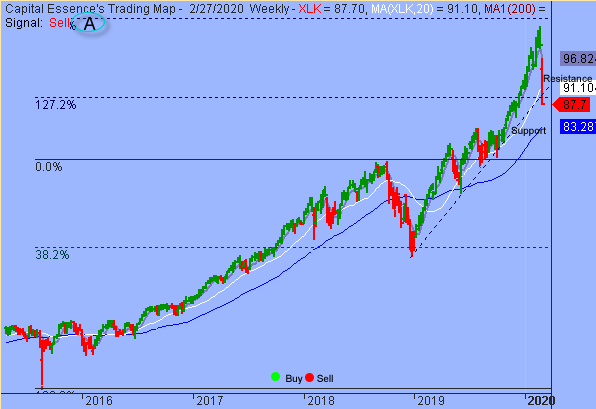 Our “U.S. Market Trading Map” painted XLK bars in red (sell) – see area ‘A’ in the chart. Over the past few weeks, XLK has been trending lower in a short-term corrective mode after the October 2019 rally ran out of steam near the 161.8% Fibonacci extension of the 2015-2018 upswing.  This week’s selloff pushed the ETF below the 2019 rising trend line, the level that offered support since XLK reached an interim lower in late 2018, signify a bearish breakout and downside reversal.  This is a negative development, opened up for a test of the more important support near the 83 zone, or the 1-year moving average.

XLK has resistance near 91.  Short-term traders could use that level as the logical level to measure risk against. 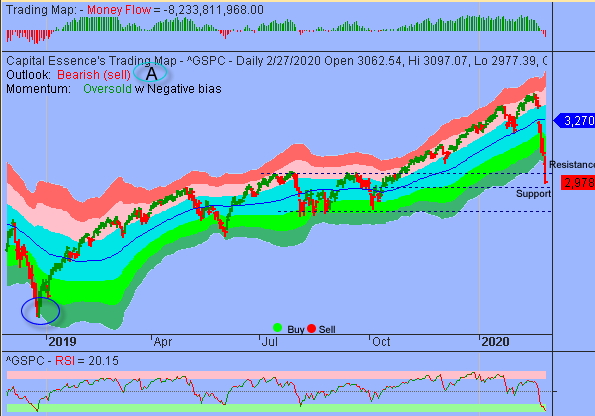 Thursday’s massive selloff pushed the S&P below the bottom of its short-term trading range.  While it’s uncommon the S&P to break below the technical level, such a move lower is often followed by a quick snap back.  The index broke through the bottom of its short-term trading range on a daily basis in late December 2018, only to bounce back up.  So it shouldn’t be surprised to see at least an attempt to rally over the next few days.

In a longer term, the uptrend that began in 2019 is on a verge of breaking down.  S&P’s 3000 is the line in the sand.  A close below that level on a weekly basis will break the uptrend and a retest of the summer 2019 lows, just below 2900, should be expected.

In summary, Thursday’s massive selloff felt like a possible capitulation point.  Like a rubber band, stocks tend to snap back to the mean if they have dropped too far from the “fair” value. With that said, if lower stock prices create some values for investors, then, given everything being equal, the market should be able to find some buyers.  However, give the significant damage that had been done over the past few days, we may need to see more evidence of exhaustive selling to suggest that near-term risks are ebbing.