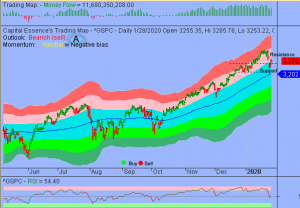 We’ve noted in the previous Market Outlook that: “S&P broke several supports Monday.  Short-term momentum has weakened but does not appear strong enough to generate major breakdowns.”  As anticipated, stocks rallied Tuesday as the rout a day earlier attracted bargain hunters.  For the day, the Dow Jones Industrial Average rose 0.7 percent to 28,722.85. The S&P climbed 1 percent to 3,276.24 while the Nasdaq Composite advanced 1.4 percent to 9,269.68.  The CBOE Volatility Index (VIX), widely considered the best gauge of fear in the market, soared more than 25 percent to close at 18.23.

Bargain-hunting investors piled into beaten-down sectors like tech stocks.  Semi outperformed amid optimism that any disruption to memory output in China on the back of a faster spread of the virus could be positive for memory suppliers outside of China such as Micron (MU) and Western Digital (WDC).  As such, the iShares PHLX Semiconductor ETF (SOXX) jumped 2.32 percent on the day and is up more than 2 percent YTD, slightly outperformed the S&P.  Now the question is whether the rally has more legs?  Below is an update look at a trade in SOXX.

Our “U.S. Market Trading Map” painted SOXX bars in green (buy) – see area ‘A’ in the chart. SOXX moved down to test support at the late 2019 rising trend line after the December rally ran out of steam near the 270 zone, just below the 161.8% Fibonacci extension of the 2015-2018 major upswing.  The correction tested support at the 250 zone.  If the ETF could hold above that level then a retest of the 270-274 zone should be easier to achieve.  A failure to hold above 250 meanwhile, will bring the 127.2% Fibonacci extension, around 230, back into view.

SOXX has support near 250.  Short-term traders could use that level as the logical level to measure risk against. 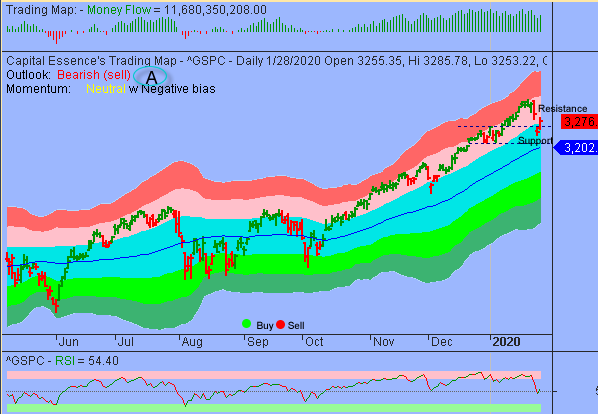 S&P moved up to test resistance at the lower boundary of the pink band after falling below that level on Monday.  Momentum indicator shifted higher from near oversold zone, allowing additional upside probing.  This is a positive development, opened up for a retest of the important sentiment 3300 mark.  That level roughly corresponds with Monday’s bearish breakaway gap.  Unless there is a close above that level, the near-term technical outlook remains bearish.  As for support, the trend channel moving average, around 3200, is the line in the sand.  A close below it would see a massive pickup in volatility.

In summary, S&P moved up to test resistance at the lower boundary of the pink band after falling below that level last week.  If the prior support turns resistance then the next leg would be significantly lower and we’re looking at 3200.