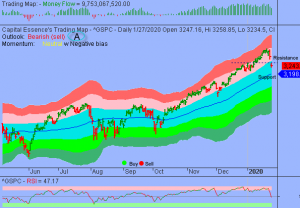 We’ve noted in the previous Market Outlook that: “Friday’s massive bearish engulfing bar suggested that suggested that an important near-term high has been established and the S&P is in a midst of a long awaited overbought correction. As for strategy, traders should consider buying downside protection on winning positions.”  As anticipated, stocks closed sharply in the red Monday as virus fears gripped investors amid worries that an accelerated outbreak will hit China’s economy and slow global growth.  The S&P lost 1.58 percent to 3,243.63.  The Dow Jones Industrial Average fell 1.6 percent to 28,535.80. The Nasdaq Composite had its worst day since August, dropping 1.9 percent to 9,139.31.  The CBOE Volatility Index (VIX), widely considered the best gauge of fear in the market, soared more than 25 percent to close at 18.23.

The selloff in casino stocks with exposure to Macau, China’s gambling capital, continued, with Wynn Resorts (WYNN) and Las Vegas Sands (LVS) down 8 percent and 7 percent respectively.  According to Bloomberg, the number of mainland Chinese visitors to the gambling-rich region of Macau fell 80% on Sunday, from a year ago.  As such, the VanEck Vectors Gaming ETF (BJK) tumbled 2.71 percent on the day and is down nearly 5 percent YTD, underperformed the S&P.  Now the question is whether the selloff is beginning of an end or there’re more pains ahead?  Below is an update look at a trade in BJK. 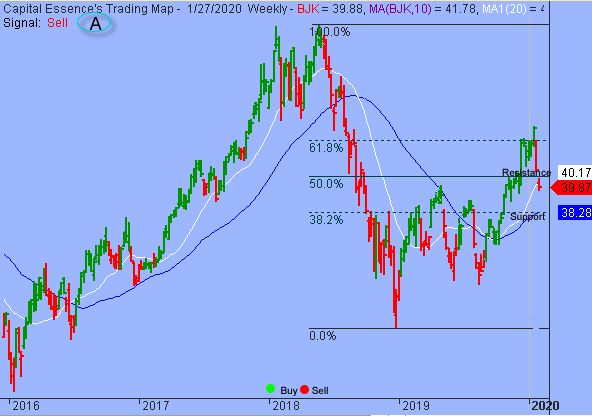 Our “U.S. Market Trading Map” painted BJK bars in red (sell) – see area ‘A’ in the chart. BJK failed below the 61.8% Fibonacci retracement after climbed above that level in early January.  Monday’s selloff pushed the ETF below the 50% Fibonacci retracement, a key technical level based on Fibonacci levels, and the closely watch 40 zone. This is a negative development, confirmed last week’s bearish reversal signal. A consecutive close below 40 will bring the 38 zone, or the 1-year moving average and the 38.2% Fibonacci retracement, into view.

BJK has resistance near 40.50.  Short-term traders could use that level as the logical level to measure risk against. 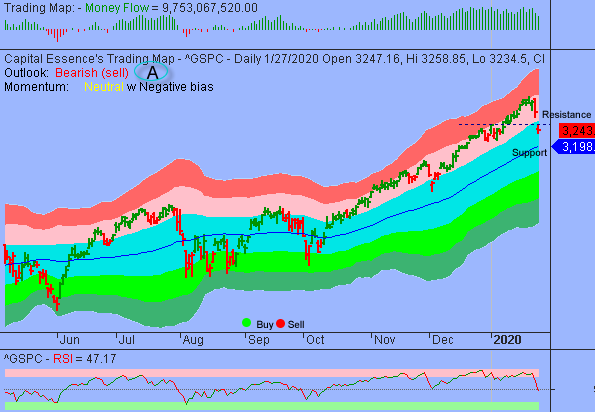 Key technical development in Monday session was a close below the early January breakout point, near 3250.  Monday’s massive selloff confirmed last Friday’s bearish reversal signal and pushed the index below the lower boundary of the pink band, or overbought zone.  Short-term momentum has weakened but does not appear strong enough to generate major breakdowns.  The trend channel moving average, around 3200, is the line in the sand.  A close below it would see a massive pickup in volatility.

In summary, S&P broke several supports Monday.  Short-term momentum has weakened but does not appear strong enough to generate major breakdowns.  Nonetheless, the longer the index stays below 3300, the more vulnerable it is to lower prices.  This is the real danger in the current market.