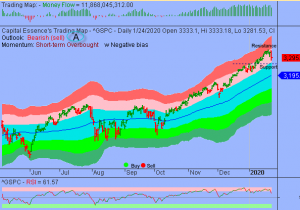 Stocks fell Friday following reports that U.S. officials had confirmed two more cases of the deadly coronavirus, which originated in China and has also spread to Japan, South Korea and Singapore.  The Dow Jones Industrial Average fell 0.6 percent to 28,989.73. The S&P lost 0.9 percent to 3,295.47. The Nasdaq Composite dropped 0.9 percent to 9,314.91.  The CBOE Volatility Index (VIX), widely considered the best gauge of fear in the market, soared more than 12 percent to close at 14.56.

Financials come under pressure as investors snapped up Treasuries, pushing yields sharply lower.  JPMorgan (JPM), Citigroup (C) and Goldman Sachs (GS) closed more than 1 percent lower as a slump in bond yields tends to keep a lid on net interest margin.  As such, the SPDR S&P Bank ETF (KBE) fell 1.58 percent on the day.  After surging nearly 27 percent in 2019, the ETF lost nearly 5 percent YTD, underperformed the S&P.  Now the question is whether recent selloff is a pause that refreshes or it’s a beginning of something worse?  Below is an update look at a trade in KBE. 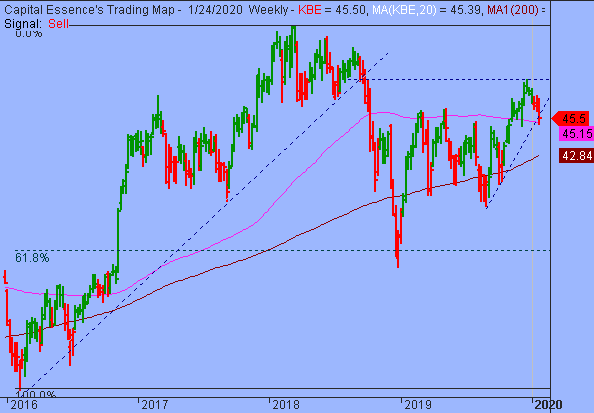 Our “U.S. Market Trading Map” painted KBE bars in red (sell) – see area ‘A’ in the chart. Over the past few weeks, KBE has been trending lower in a short-term corrective mode after the October rally ran out of steam near the late 2018 breakdown point.  Last week’s selloff is testing support at the 45 zone.  That level is significant in charting terms.  It roughly corresponds with the late 2019 rising trend line and the 2-year moving average.  A close below 45 on a weekly basis will break the multi-month uptrend and a test of the 4-year moving average, around 43, should be expected.

KBE has resistance near 48.  Short-term traders could use that level as the logical level to measure risk against. 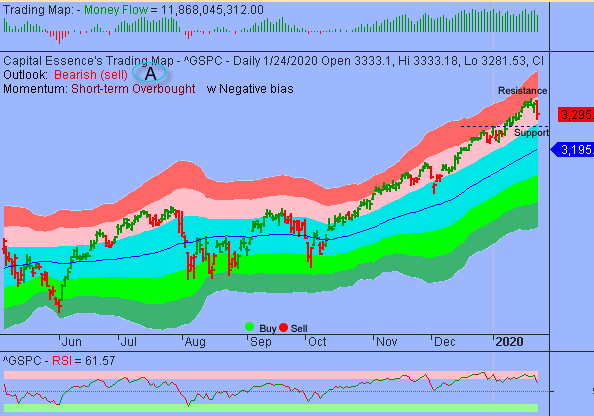 Once again, the S&P sold off after the early rally attempt ran into resistance near the lower boundary of the red band.  In accordance to the Japanese candlestick pattern recognition, Friday’s massive bearish engulfing bar is a clear indication of buyers losing momentum.  Technically speaking, when this pattern formed after an upswing in the market, it can be an indication of a trend reversal.  Perhaps the lagging momentum, which peaked in late 2019 and printed series of lower highs as prices ascending, is the best illustration of the bears’ case.  Over the next few days, traders should monitor the retreat and rebound behaviors near the 3270-3260 zone, or the lower boundary of the pink band and the early January breakout point.  A close below that level will bring the trend channel moving average, just below the important sentiment 3200 mark, into view.

Resistance is at the lower boundary of the red band, currently at 3340.  As mentioned, a trade above that level indicates extreme overbought conditions.  The normal behavior for the S&P has been to consolidate and retreated almost every time it traded above that level so there is a high probability that a significant consolidation pattern will again develop in this area.

In summary, Friday’s massive bearish engulfing bar suggested that suggested that an important near-term high has been established and the S&P is in a midst of a long awaited overbought correction. As for strategy, traders should consider buying downside protection on winning positions.