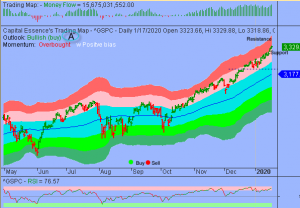 Stocks rose slightly on Friday wrapped up a solid weekly performance amid strong global economic data and a solid start to the earnings season.  For the day, the S&P added 0.4 percent to 3,329.62. The Dow Jones Industrial Average gained 0.2 percent to 29,348.10. The Nasdaq Composite advanced 0.3 percent to 9,388.94.  The CBOE Volatility Index (VIX), widely considered the best gauge of fear in the market, fell nearly 2 percent to close at 12.10.

U.S. homebuilding surged to a 13-year high in December as activity increased across the board, suggesting the housing market recovery was back on track amid low mortgage rates.  Housing starts jumped 16.9% to a seasonally adjusted annual rate of 1.608 million units last month, the highest level since December 2006. The SPDR S&P Homebuilders ETF (XHB) closed flat on the day following the bullish report, but up more than 3 percent for the week, outperformed the S&P.  Now the question is whether the rally has more legs?  Below is an update look at a trade in XRT. 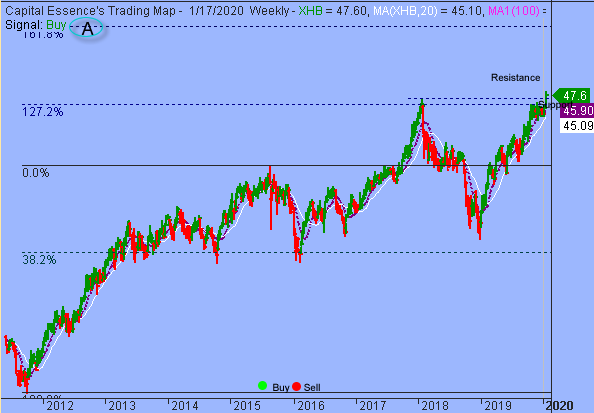 Our “U.S. Market Trading Map” painted XHB bars in green (buy) – see area ‘A’ in the chart. Over the past few weeks, XHB has been basing sideways near the 45-47 zone, as it works off overbought conditions.  Last week’s rally had helped push the ETF above the closely watch 47 zone, or the prior high set in early 2018, signify a bullish breakout. This is a positive development, opened up for a test of the more important near the 56 zone, or the 161.8% Fibonacci extension of the 2011-2018 upswing.

XHB has support near 45.  Short-term traders could use that level as the logical level to measure risk against. 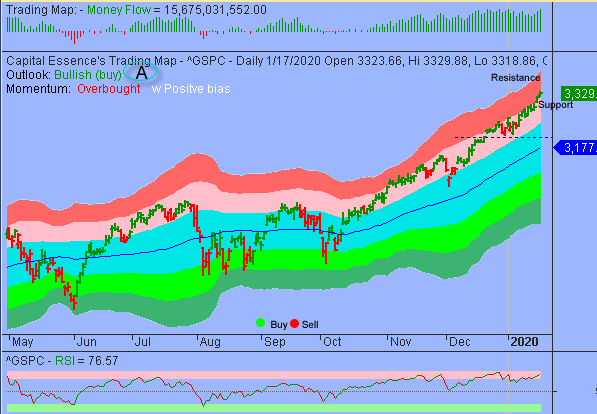 The S&P continues drifting higher after climbed above the lower boundary of the red band on Thursday.  Money Flow measure trended higher from above the zero line, indicating an increase in buying pressure.  This is a positive development but let’s notice that the index had traded above its short-term trading range and into extreme overbought zone, as represents by the red band on the chart, following recent advance.  As mentioned, the normal behavior for the S&P has been to consolidate and retreated almost every time it traded above that level so there is a high probability that a significant consolidation pattern will again develop in this area.

Momentum indicator also reached extreme overbought zone following recent advance – a condition that often precursor to a short-term correction.  So, we’d be cautious against taking large position at this stage.
Over the next few day, traders should monitor trading behavior near 3300.  A failure to hold above that level signify a short-term trend reversal with downside target around 3270-3250.  Resistance is at the upper boundary of the red band, currently at 3390.

In summary, while the overall technical background remains bullish, the S&P is overbought following recent advance.  While overbought condition is normal during long-term uptrend, it’s suggested that upside momentum might not sustain without at least a short-term breather.  So, there is no big commitment to accumulate stocks aggressively at this point.  There is a high probability that the S&P would consolidate before a new leg higher.   As for strategy, we would look to increase upside exposure on market dips rather than chasing breakouts.