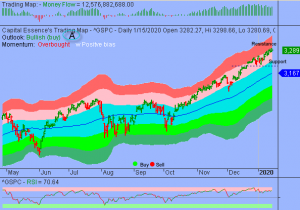 Stocks closed slightly higher Wednesday after the U.S. and China signed a highly anticipated phase one trade agreement.  For the day, the S&P added 0.19 percent to 3,289.29.  The Dow Jones Industrial Average rose 0.3 percent to 29,030.22. The Nasdaq Composite closed just above the flatline at 9,258.70.  The CBOE Volatility Index (VIX), widely considered the best gauge of fear in the market, rose less than 1 percent to close at 12.42.

Gold futures and bullion rebounded from two-straight days of losses as markets vexed over Washington’s decision to keep duties on some $360 billion of Chinese goods, despite the phase one agreement inked between President Donald Trump and China’s Vice Premier Liu He at the White House.  Spot gold, which tracks live trades in bullion, was up $8.74 at $1,554.86.  As such, the VanEck Vectors Gold Miners ETF (GDX) rose 1.88 percent on the day after soaring nearly 39 percent in 2019, outperformed the S&P.  Now the question is whether the rally has more legs?  Below is an update look at a trade in GDX. 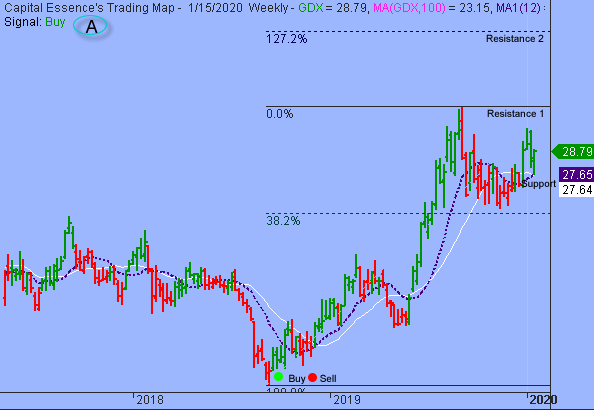 Our “U.S. Market Trading Map” painted GDX bars in green (buy) – see area ‘A’ in the chart. GDX rebounded nicely after recent pullback found support near the late December breakout point.  This is a positive development, opened up for a retest of the 2019 high near 31.  That level is significant in charting terms.  A close above it on a weekly basis signify a bullish breakout and trigger acceleration toward the 127.2% Fibonacci extension of the 2018-2019 upswing, near 34.50.

GDX has support near 27.60.  Short-term traders could use that level as the logical level to measure risk against. 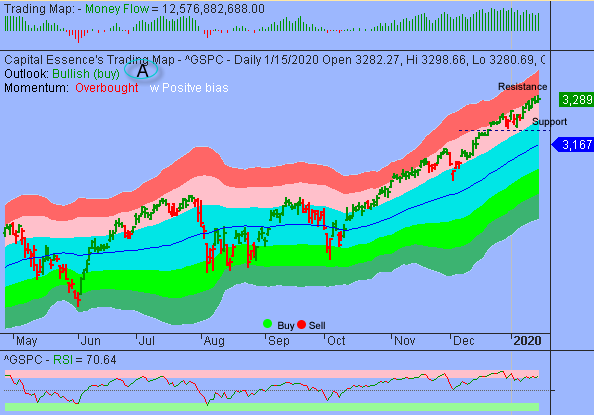 The big picture remains the same.  The S&P continues drifting higher near the lower boundary of the red, or extreme overbought zone.  While overbought condition is normal during a pro-long uptrend, it’s suggested that upside momentum might not sustain without at least a short-term breather.  Nevertheless, the overall technical backdrop remains supportive over the short to medium-term.  This could help putting a short-term floor under the market.  With this in mind we’d look to increase exposure into short-term market dips rather than chasing breakouts.

Over the next few day, traders should monitor trading behavior near 3250.  A failure to hold above that level signify a short-term trend reversal and a retest of 3200 should be expected.  Resistance is at the lower boundary of the red band, currently at 3300.  As mentioned, the normal behavior for the S&P has been to consolidate and retreated almost every time it traded above that level so there is a high probability that a significant consolidation pattern will again develop in this area.

In summary, while overbought is putting a cap on the upside the overall technical backdrop remains supportive so downside risk could be limited. It is possible that S&P could continue to drift higher as trading sentiment remains strong.  As for strategy, traders should look to increase exposure into short-term market dips rather than chasing breakouts.