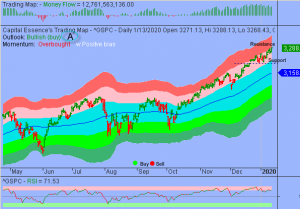 We’ve noted in the previous Market Outlook that: “an overbought pullback consolidation interrupted the late December rally in the S&P.  Although seemingly vulnerable to further short-term weakness, the overall technical backdrop remains positive so sell-off could be shallow because the sideline money will try to fight its way back into the market.”  As anticipated, stocks closed higher Monday following report that the U.S. will remove China from a list of currency manipulating countries, increasing optimism ahead of the signing of a key trade agreement.  For the day, the S&P gained 0.7 percent to 3,288.13.  The Dow Jones Industrial Average rose 0.3 percent to 28,907.05. The Nasdaq Composite added 1 percent to 9,273.93.  The CBOE Volatility Index (VIX), widely considered the best gauge of fear in the market, fell nearly 2 percent to close at 12.32.

Investors also looked ahead to the start of the corporate earnings season. Citigroup and J.P. Morgan Chase are among the companies set to report earnings. Expectations for the earnings season are low, however.  After surging nearly 30 percent in 2019, the Financial Select Sector SPDR ETF (XLF) was confined to a sideways trading pattern.  Now the question is whether recent weakness is a pause that refreshes or it’s a beginning of something worse?  Below is an update look at a trade in XRT. 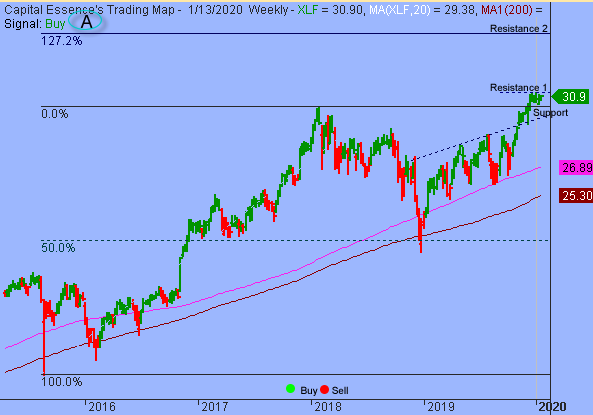 Our “U.S. Market Trading Map” painted XLF bars in green (buy) – see area ‘A’ in the chart. Over the past few weeks, XLF has been basing sideways using the 2018 high as support.  The fact that the ETF managed to hold on to all of the late 2019 gains despite overbought conditions is pretty bullish.  It’s suggested that XLF could breakout to new high as soon as it works off excessive optimism.  Resistance is just above 31.  A close above that level on a weekly basis signify a bullish breakout and a test of the more important resistance near the 34.50 zone, or the 127.2% Fibonacci extension, should be expected.

XLF has support near 30.30.  Short-term traders could use that level as the logical level to measure risk against. 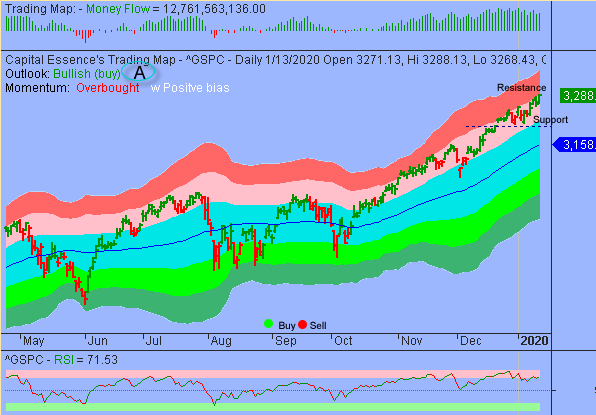 As it was the case of late, the S&P rebounded nicely after last Friday’s retreat was met with a new wave of buying interest.  Money Flow measure is registering a weak bullish signal.  The indicator peaked in late December and formed series of lower highs as prices ascending, suggesting less and less money are chasing the rally.  Adding to concerns is the return of overbought conditions on the daily chart.  These elements will give the bulls more pressures than they have already had.  While more backing and filling would not be a surprise, if the S&P could hold above 3263 then a move above 3300 would be easier to be sustained.

For now, 3200 is the line in the sand.  A close below that level will trigger another selloff with initial downside target near 3158.  Resistance is at the lower boundary of the red band, currently at 3290.  As mentioned, the normal behavior for the S&P has been to consolidate and retreated almost every time it traded above that level so there is a high probability that a significant consolidation pattern will again develop in this area.