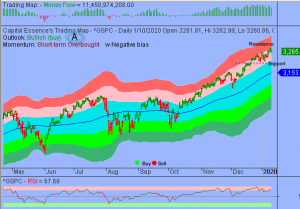 Stocks fell on Friday, reversing from all-time highs, as investors digested weaker-than-expected jobs data.  The U.S. economy added 145,000 jobs in December. Economists expect the U.S. economy to have added 160,000 jobs in December.  Wages also disappointed, growing by just 2.9 percent on a year-over-year basis.  Economists had forecast a gain of 3.1 percent. December was also the first month since July 2018 that wages grew by less than 3 percent from the year before.

Retailers edged lower amid concerns that the economy is slowing down, after hiring data fell short of estimates and wage growth was the weakest in more than a year.  As such, the SPDR S&P Retail ETF (XRT) fell 0.29 percent on the day after climbed more than 12 percent in 2019, underperformed the S&P.  Now the question is whether recent weakness is a pause that refreshes or it’s a beginning of something worse?  Below is an update look at a trade in XRT. 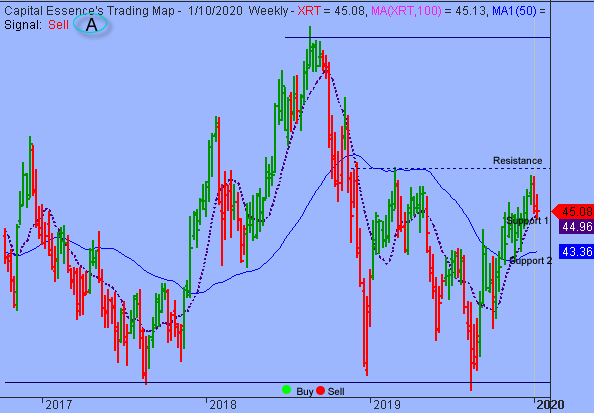 Our “U.S. Market Trading Map” painted XRT bars in red (sell) – see area ‘A’ in the chart. Over the past few weeks, XRT has been trending lower in a short-term corrective mode after the October rally ran out of steam near the prior high set in early 2019.  Last week’s selloff is testing support at the 45 zone.  that level is significant in charting terms.  A failure to hold above it will bring the 1-year moving average, just above 43, into view.

XRT has resistance near 46.50.  Short-term traders could use that level as the logical level to measure risk against. 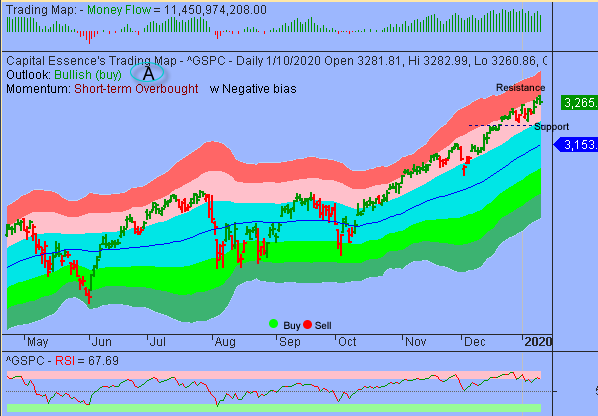 Once again, the S&P retreated after the early rally attempt ran into resistance at the lower boundary of the red band, or extreme overbought zone.  Momentum indicator shifted lower from near overbought zone, suggesting further short-term weakness likely.  While these elements might slightly affect trading sentiment over the coming days, Money Flow measure remains supportive so downside risk could be limited.

For now, 3200 is the line in the sand.  A close below that level will trigger another selloff with initial downside target near 3150.  Resistance is at the lower boundary of the red band, currently at 3283.  As mentioned, the normal behavior for the S&P has been to consolidate and retreated almost every time it traded above that level so there is a high probability that a significant consolidation pattern will again develop in this area.

In summary, an overbought pullback consolidation interrupted the late December rally in the S&P.  Although seemingly vulnerable to further short-term weakness, the overall technical backdrop remains positive so sell-off could be shallow because the sideline money will try to fight its way back into the market.