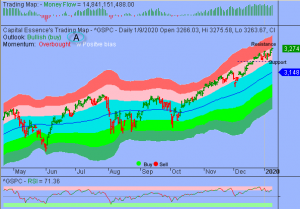 Stocks closed higher Thursday following reports that the partial U.S.-China trade deal would be concluded as soon as next week.  The S&P climbed 0.7 percent to 3,274.70.  The Dow Jones Industrial Average gained 0.7 percent to 28,956.90. The Nasdaq Composite advanced 0.8 percent to 9,203.43.  The CBOE Volatility Index (VIX), widely considered the best gauge of fear in the market, fell more than 6 percent to close at 12.54.

With hopes running high that the world’s largest two economies may find a resolution to their months-long trade war sooner rather than later, investors piled into tech stocks.  Advanced Micro Devices (AMD).jumped 2.4 percent after Mizuho upgraded it to buy, saying the 2020 server market could be stronger than current consensus, raising the prospect of higher growth for the chipmaker.  As such, the iShares PHLX Semiconductor ETF (SOXX) rose 0.63 percent on the day and was up 60 percent in 2019, outperformed the S&P.  Now the question is whether the rally has more legs?  Below is an update look at a trade in SOXX.

Our “U.S. Market Trading Map” painted SOXX bars in green (buy) – see area ‘A’ in the chart. Over the past few weeks, SOXX has been basing sideways near the 250 zone as it works off overbought conditions.  This week’s rally pushed the ETF above the prior high set in early January, signify a bullish breakout and upside reversal.  This is a positive development, opened up for a test of the more important resistance near the 274 zone, or the 161.8% Fibonacci extension. 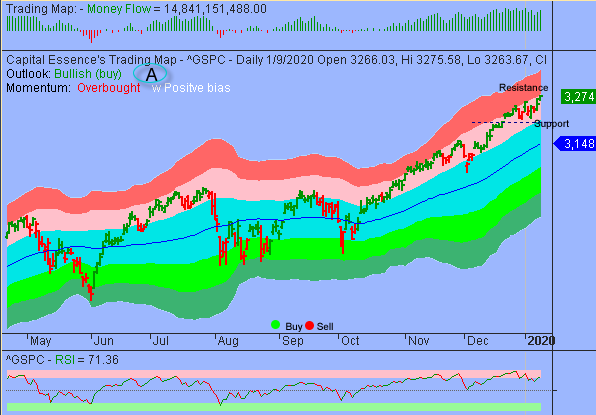 The S&P trades in broad trading bands that define the trend behavior. The upswing was very rapid with some short-term consolidation near each of the significant support or resistance levels. These support and resistance levels also define the limits and barriers to any future rally and uptrend development.

S&P continues drifting higher near the lower boundary of the red after recent pull back found support just above the important sentiment 3200 mark.  Money Flow measure flashes a weak bull signal as it trended higher from above the zero but still unable to take out the December peak, indicating less money’s chasing stocks higher.  Adding to concerns is the overbought conditions.  While overbought condition is normal during a pro-long uptrend, it’s suggested that upside momentum might not sustain without at least a short-term breather.  While these elements might slightly affect trading sentiment over the coming days, momentum remains supportive so downside risk could be limited.  With this in mind we’d look to purchase stocks during short-term dips in the market rather than chasing breakouts.

For now, 3200 is the line in the sand.  A close below that level will trigger another selloff with initial downside target near 3140.  Resistance is at the lower boundary of the red band, currently at 3278.  As mentioned, the normal behavior for the S&P has been to consolidate and retreated almost every time it traded above that level so there is a high probability that a significant consolidation pattern will again develop in this area.

In summary, overbought conditions have returned on a daily basis but momentum remains supportive so downside risk could be limited. It is possible that S&P could continue to drift higher as trading sentiment remains strong.  As for strategy, traders should consider purchase stocks during short-term dips in the market and stay bullish.