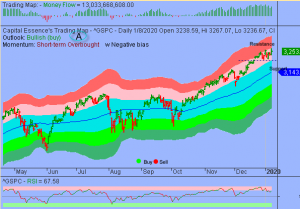 We’ve noted in the previous Market Outlook that: “recent trading actions leaving the S&P in what looks to us like an orderly high level back-and-forth consolidation of the December massive rally.   There is a high probability that the upper and lower limit of a short-term trading range has been set between the 3250 and 3200 levels on the S&P.  While the near-term technical backdrops favors a break to the upside it will be important to monitor the retreat and rebound behaviors to determine whether breakouts are decisive.”  As anticipated, stocks rose on Wednesday after Donald Trump’s remarks stoked hopes of an end to rising U.S.-Iran tensions, easing fears of direct military conflict in the Middle East. The S&P climbed 0.5 percent to 3,253.05.  The Dow Jones Industrial Average gained 0.6 percent to 28,745.09. The Nasdaq Composite advanced 0.7 percent to 9,129.24.  The CBOE Volatility Index (VIX), widely considered the best gauge of fear in the market, fell more than 2 percent to close at 13.45.

Tech stocks outperformed amid strength in Microsoft (MSFT) and Apple (AAPL).  Morgan Stanley raised its target on Microsoft to $189 from $157, on expectations that the tech giant is set to deliver strong performance in the coming year.  Wedbush, meanwhile, said robust iPhone 11 sales during the holiday season and strong AirPods performance should lead to “clear upside” in Apple’s upcoming quarterly earnings report.  As such, the Technology Select Sector SPDR ETF (XLK) jumped 1.07 percent on the day and was up nearly 48 percent in 2019, outperformed the S&P.  Now the question is whether the rally has more legs?  Below is an update look at a trade in XLK. 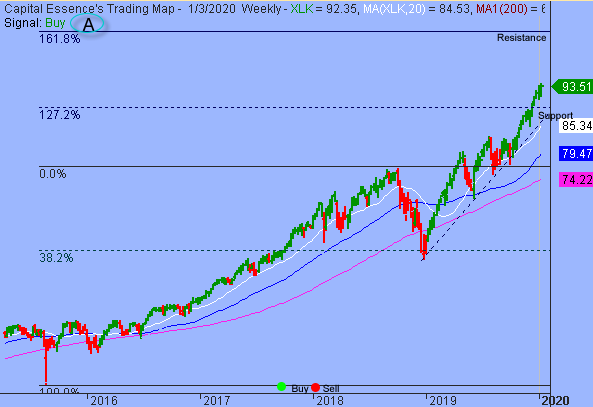 Our “U.S. Market Trading Map” painted XLK bars in green (buy) – see area ‘A’ in the chart. XLK has been on a tear in recent weeks after the early December correction found support near the 2019 rising trend line.  The mid-December rally pushed the ETF above the 127.2% Fibonacci extension, a key technical level based on Fibonacci levels. This is a positive development, opened up for a test of the more important resistance near the 104 zone, or the 161.8% Fibonacci extension.

XLK has support near 88.  Short-term traders could use that level as the logical level to measure risk against. 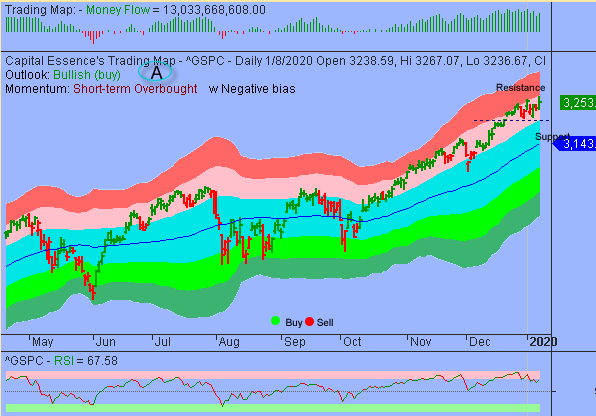 S&P moved up to test resistance at the lower boundary of the red band after recent pull back found support just above the important sentiment 3200 mark.  Money Flow measure trended higher from above zero line, indicating an increase in buying pressure.  This is a bullish development but let’s notice that momentum indicator is much closer to overbought than oversold zone following recent advance.  So we’d be cautious against taking large position at this stage.

For now, 3200 is the line in the sand.  A close below that level will trigger another selloff with initial downside target near 3140.  Resistance is at the lower boundary of the red band, currently at 3272.  As mentioned, the normal behavior for the S&P has been to consolidate and retreated almost every time it traded above that level so there is a high probability that a significant consolidation pattern will again develop in this area.

In summary, the fact that market is overbought as S&P poked its head into the level that had been successful in repelling price action in the past does not favor a sustain breakout.  The overall technical backdrop however, remains bullish so we’d look to increase upside exposure on market dips rather than chasing breakouts.