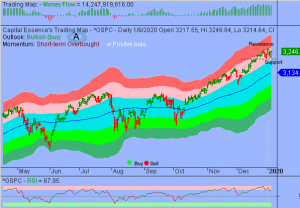 We’ve noted in the previous Market Outlook that: “Friday’s bearish trend reversal suggested that the yearend rally might have come to an end.  There is a better than average odds that the selloff will momentum, but the overall technical backdrop remains positive so expect the S&P to draw in buyers in any pullback toward the 3200 zone.”  as anticipated, stocks traded lower in early Monday session that saw the S&P traded as low as 3214 before buyers stepped in and pushed prices higher.  For the day, the bench mark gauge added 0.4 percent to 3,246.28 while the Nasdaq Composite advanced 0.6 percent to 9,071.46.  The Dow Jones Industrial Average rose 0.2% percent to 28,703.38.  The CBOE Volatility Index (VIX), widely considered the best gauge of fear in the market, fell more than 1 percent to close at 13.85.

Gold remained the favored safe haven amid rising geopolitical worries following last week’s U.S. killing of Iran’s top general.  On Monday, gold futures hit their highest level in more than six years.  As such, the SPDR Gold Shares (GLD) rose 1.05 percent on the day after rising nearly 18 percent in 2019, underperformed the S&P.  Now the question is whether the rally has more legs?  Below is an update look at a trade in GLD. 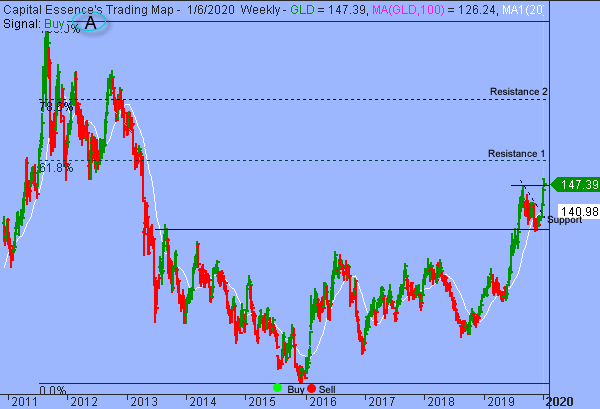 Our “U.S. Market Trading Map” painted GLD bars in green (buy) – see area ‘A’ in the chart.  GLD has been on a tear in recent weeks after breakout above the September falling trend line in late December.  This week’s rally pushed the ETF above the September high, signify a bullish breakout and upside reversal.  This is a bullish development, opened up for a test of the more important resistance near the 153 zone, or the 61.8% Fibonacci retracement.  That level is significant in charting terms.  A close above it will trigger acceleration toward the 78.6% Fibonacci retracement, near 168.

GLD has support near 141.  Short-term traders could use that level as the logical level to measure risk against. 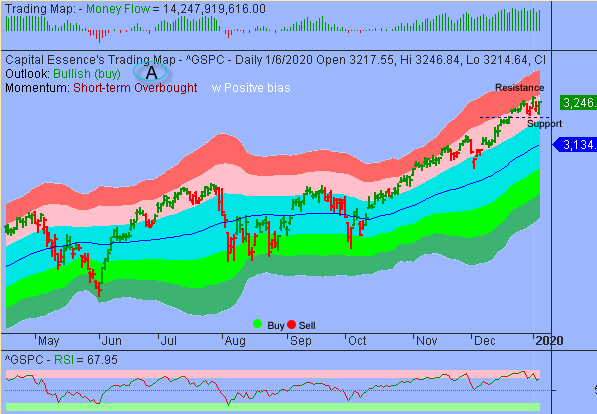 As expected S&P rebounded nicely after the early selloff attempt was met with a new wave of buying interest.  That index traded as low as 3214 before buyers stepped in and pushed prices higher.  This is a positive development. In fact, Monday’s bullish reversal invalidated last week’s bearish signal and put the index back into the short-term sideways trading pattern that has dominated the market since later December.

Money Flow measure is above the zero line, suggesting the bulls were much more aggressive as prices rallied than bears were as prices dropped and that net demand was strong.  In fact, all brief pullbacks since the market broke out in December have been met with aggressive wave of buying interest.  So, it will be important to monitor the rallies and retreats behaviors over the next few days to determine whether Monday’s turnaround is legit.

Resistance is at the lower boundary of the red band, currently at 3265.  As mentioned, the normal behavior for the S&P has been to consolidate and retreated almost every time it traded above that level so there is a high probability that a significant consolidation pattern will again develop in this area.

In summary, based upon recent trading actions, an important near-term low has been established and the S&P is in an early stage of a new upswing that projects to 3265 at minimum but has an overshot target near 3300.