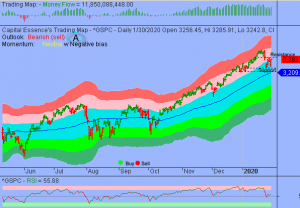 Equity market finished solidly higher Thursday, coming back from a day of mostly sharp losses, after the World Health Organization declared the coronavirus a global health emergency, but backed China’s efforts to contain the outbreak, calming fears of a global pandemic. For the day, the Dow Jones Industrial Average added 0.43 percent to 28,859.44. The S&P rose 0.31 percent to 3,283.66. The Nasdaq Composite added 0.26 percent to 9,298.93.  The CBOE Volatility Index (VIX), widely considered the best gauge of fear in the market, fell more than 5 percent to close at 15.49.

Microsoft led the tech sector higher with a 2.8 percent gain after the tech giant reported better-than-expected quarterly results.  As such, the Technology Select Sector SPDR ETF (XLK) rose 0.86 percent on the day and is up about 7 percent YTD, outperformed the S&P.  Now the question is whether the rally has more legs?  Below is an update look at a trade in XLK. 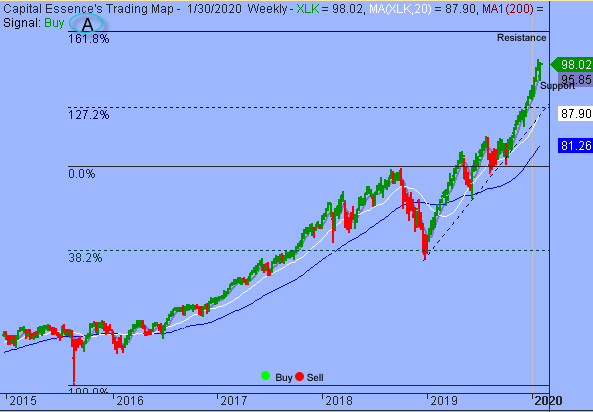 Our “U.S. Market Trading Map” painted XLK bars in green (buy) – see area ‘A’ in the chart. XLK has been on a tear in recent months after breakout in late October 2019.  This week’s correction is testing support at the 95 zone.  Thursday’s impressive reversal suggested that the support would hold and a retest of the prior high, near 99, should be expected.  A sustain advance above that level will bring the 161.8% Fibonacci extension, just above 104, into view.

XLK has support near 95.  Short-term traders could use that level as the logical level to measure risk against. 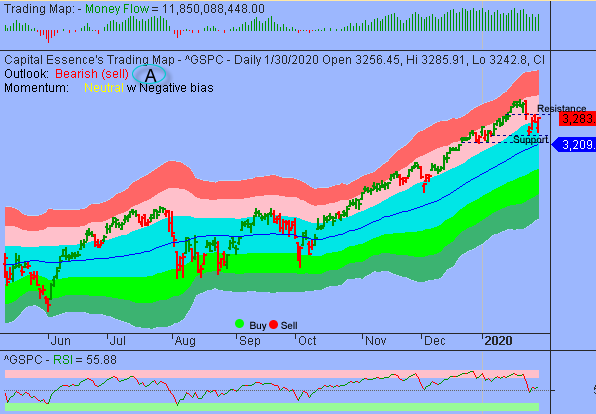 Once again, the S&P rebounded nicely after the early selloff attempt found support near the prior low set earlier this week.  The big picture remains the same.  There is a consolidation near the lower boundary of the pink band, or overbought zone. That level roughly corresponds with the important sentiment 3300 mark.  It was significant when the S&P fell below it in on Monday. Momentum has been weakened but does not appear strong enough to generate a widespread breakdown.  Right now, the most important thing to watch is the rally and retreat behaviors near 3300.  Unless there is a close above that level, the near-term technical outlook remains bearish.  Monday’s intraday low of 3234 is the line in the sand.  A failure to hold above that level will see a massive pickup in volatility.

In summary, we wouldn’t look too much into Thursday’s trading action because it keeps the S&P within its short-term consolidation phase.  While further backings and fillings is expected, the fact that the index manages to hold on to most of the December’s gains is pretty impressive, suggesting that S&P might break to new high as soon as the market shakes off excessive bullishness.