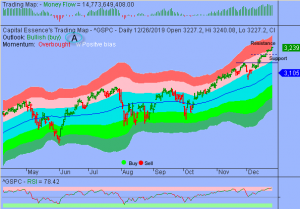 We’ve noted in the previous Market Outlook that: “the big picture remains the same.  There’s an orderly high-level consolidation period near S&P’s 3230-3220, which represented the digestion period in the aftermath of the early December rally.  Market internals remains positive and downside momentum does not appear strong enough to generate widespread breakouts.  As for strategy, buying into short-term dips remains the most profitable strategy.”  As anticipated, stocks climbed Thursday, hitting record highs. The Dow Jones Industrial Average rose 0.37 percent to 28,621.39. The S&P climbed 0.51 percent to 3,239.91and the NASDAQ Composite added 0.78 percent to 9,022.39.  The CBOE Volatility Index (VIX), widely considered the best gauge of fear in the market, fell less than 1 percent to close at 12.65.

Gold prices rose to a two month high. Spot gold added 0.7 percent to $1,509.10 an ounce.  The yellow metal has been on the rise recently as a hedge against potential inflation, dollar weakness and increased equity market volatility in 2020.  As such, the SPDR Gold Shares (GLD) rose 0.79 percent on the day and is up more than 17 percent year to date, underperformed the S&P.  Now the question is whether the rally has more legs?  Below is an update look at a trade in GLD. 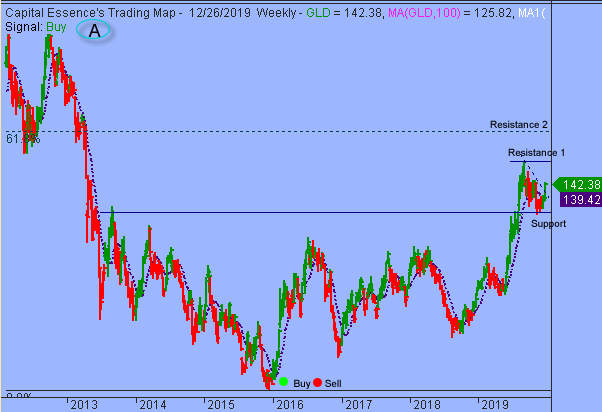 Our “U.S. Market Trading Map” painted GLD bars in green (buy) – see area ‘A’ in the chart.  Over the past few weeks, GLD has been trending lower in a short-term corrective mode after the late May rally ran out of steam near the 146 zone.  The September correction found support neat the 2013 breakdown point.  This week’s rally pushed the ETF above the September falling trend lines, signify an upside reversal and bullish breakout. This is a positive development, opened up for a retest of the 146.80 zone.  A close above that level on a weekly basis will trigger acceleration toward the 153 zone, or the 61.8% Fibonacci retracement of the 2011-2015 downswing

GLD has support near 136.  Short-term traders could use that level as the logical level to measure risk against. 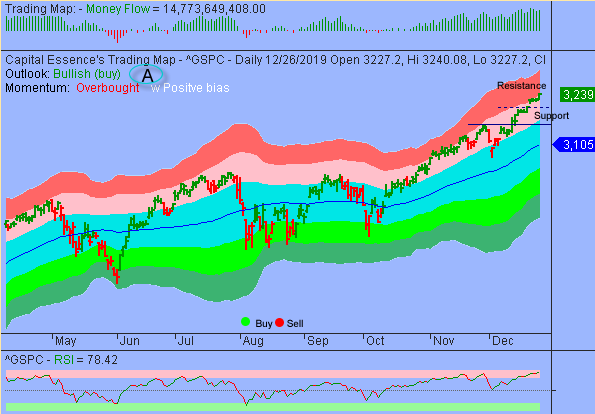 S&P rebounded nicely after recent pullback was met with a new wave of buying interest.  Thursday’s upside breakout had helped clear 3227, or the upper limit of the 3-day sideways trading range, signify a bullish breakout.  This is a positive development but let’s notice that the market is overbought following recent advance so it’d be important to monitor the breakout and retreat behaviors over the next few days to determine whether breakouts are decisive.

Over the next few days, the most important to watch is trading behavior near the lower boundary of the red band, or extreme overbought zone, currently at 3239.  As mentioned, the normal behavior for the S&P has been to consolidate and retreated almost every time it traded above that level so there is a high probability that a significant consolidation pattern will again develop in this area.

In summary, Thursday’s rally pushed the S&P above the short-term sideways trend, signify a bullish breakout.  While there seems to be room to go higher, traders must be mindful that the return of overbought conditions on the daily chart.  While overbought condition is normal during a pro-long uptrend, it’s suggested that upside momentum might not sustain without at least a short-term breather.  Therefore, it’d be important to monitor the breakout and retreat behaviors over the next few days to determine whether breakouts are decisive.