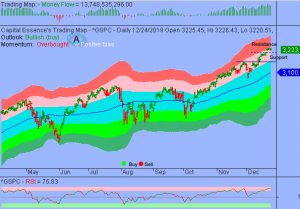 We’ve noted in the previous Market Outlook that: “market is overbought following recent advance.  Nonetheless, Money Flow measure and momentum remain supportive so downside risk could be limited. It is possible that S&P could continue to drift higher as trading sentiment remains strong.  As for strategy, buying into short-term dips remains the most profitable strategy.”  As anticipated, stocks closed near the flat line Tuesday as investors paused after a record-setting rally fueled by improving U.S.-China trade relations that has put the market on course for its best year since 2013.   The Dow Jones Industrial Average fell 0.13 percent to 28,515.45. The S&P lost 0.02 percent to 3,223.38 and the Nasdaq Composite added 0.08 percent to 8,952.88.  The CBOE Volatility Index (VIX), widely considered the best gauge of fear in the market, added less than 1 percent to close at 12.67.

Industrials lagged the most among S&P sectors, while real estate was the top gainer.  As such, the iShares U.S. Real Estate ETF (IYR) rose 0.27 percent on the day and is up more than 22 percent year to date, slightly underperformed the S&P.  Now the question is whether the rally has more legs?  Below is an update look at a trade in IYR. Our “U.S. Market Trading Map” painted IYR bars in green (buy) – see area ‘A’ in the chart.  IYR rebounded nicely after the late October correction found support near the 1-year moving average, a key technical level based on moving averages.  This week’s rally pushed the ETF up against the mid-December breakdown point, near 92.60.  That level roughly corresponds with the 20-weekmoving average.  A sustain advance above it signify an upside reversal and a retest of the October high of 96 should be expected.

IYR has support near 89.  Short-term traders could use that level as the logical level to measure risk against. S&P’s basing sideway near the lower boundary of the red band after breaking out above the important sentiment 3200 mark last week. Market is overbought following recent advance but Money Flow measure is above the zero line, indicating a positive net demand for stocks.  This certainly would argue that the path with least resistance remains to the upside.

Over the next few days, the most important to watch is trading behavior near the lower boundary of the red band, or extreme overbought zone, currently at 3231.  As mentioned, the normal behavior for the S&P has been to consolidate and retreated almost every time it traded above that level so there is a high probability that a significant consolidation pattern will again develop in this area.

In summary, the big picture remains the same.  There’s an orderly high-level consolidation period near S&P’s 3230-3220, which represented the digestion period in the aftermath of the early December rally.  Market internals remains positive and downside momentum does not appear strong enough to generate widespread breakouts.  As for strategy, buying into short-term dips remains the most profitable strategy.