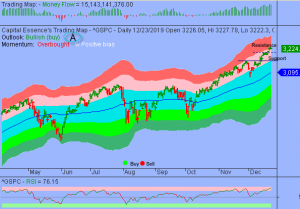 Energy stocks outperformed after Russia said an OPEC-led producer group may consider easing output cuts next year, offsetting support from some investor optimism that an initial U.S.-China trade deal would be signed soon.  West Texas Intermediate gained 8 cents to settle at $60.52 per barrel.   As such, the Energy Select Sector SPDR ETF (XLE) rose 1.03 percent on the day and is up more than 8 percent year to date, underperformed the S&P.  Now the question is whether the rally has more legs?  Below is an update look at a trade in XLE. 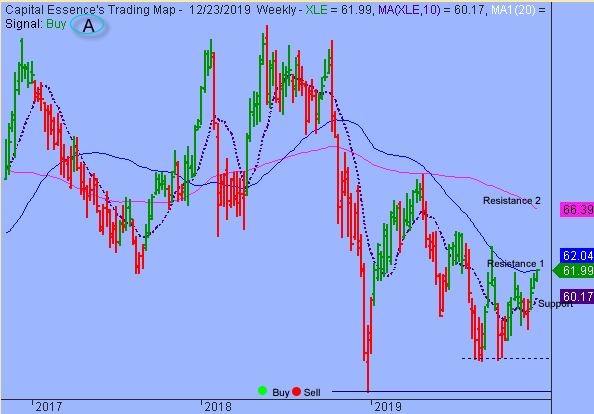 Our “U.S. Market Trading Map” painted XLE bars in green (buy) – see area ‘A’ in the chart.  XLE has been on a tear in recent weeks after the early November correction found support near the late October breakout point.  This week’s rally pushed the ETF up against the 1-year moving average, the level that acted as strong resistance since XLE fell below it in late 2018.  Over the next few days, traders should monitor trading behaviors near 62.  A close above that level on a weekly basis signify a bullish breakout and opened up for a test of the more important resistance near the 66 zone.

XLE has support near 60.  Short-term traders could use that level as the logical level to measure risk against. 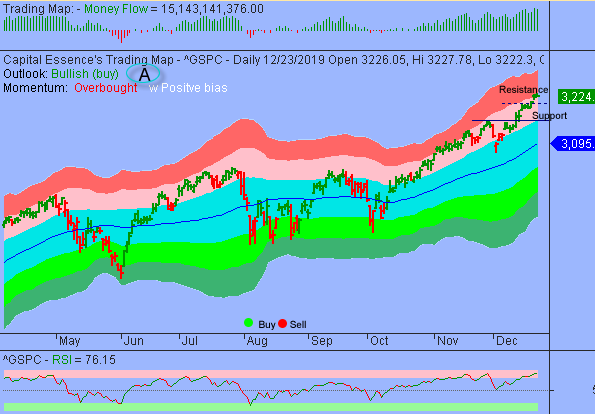 S&P continues drifting higher after breaking out above the important sentiment 3200 mark last week.  This week’s rally pushed the index up against the lower boundary of the red band.  As mentioned, the red zone indicated extreme overbought conditions – a situation that often precursor to a meaningful correction.  Nevertheless, Money Flow measure is above the zero line, indicating a positive net demand for stocks.  This certainly would argue that the path with least resistance remains to the upside.

Over the next few days, the most important to watch is trading behavior near the lower boundary of the red band, or extreme overbought zone, currently at 3227.  As mentioned, the normal behavior for the S&P has been to consolidate and retreated almost every time it traded above that level so there is a high probability that a significant consolidation pattern will again develop in this area.

In summary, market is overbought following recent advance.  Nonetheless, Money Flow measure and momentum remain supportive so downside risk could be limited. It is possible that S&P could continue to drift higher as trading sentiment remains strong.  As for strategy, buying into short-term dips remains the most profitable strategy.