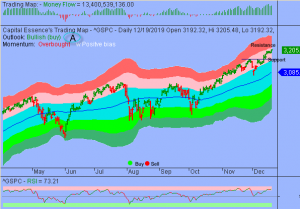 Stocks pushed to new intraday highs on Thursday as investors felt better about U.S.-China trade relations and bet heavily on chip stocks.  For the day, the S&P advanced 0.5 percent to 3,205.37. The Dow Jones Industrial Average climbed 0.5 percent to 28,376.96. The Nasdaq Composite gained 0.7 percent to 8,887.22.  The CBOE Volatility Index (VIX), widely considered the best gauge of fear in the market, fell less than 1 percent to 12.50.

Chip stocks outperformed, partly driven by a rally in Cirrus Logic (CRUS), reportedly the possible target of Facebook (FB).  As such, the iShares PHLX Semiconductor ETF (SOXX) rose 0.8 percent on the day but is up more than 58 percent year to date, outperformed the S&P.  Now the question is whether the rally has more legs?  Below is an update look at a trade in SOXX.

Our “U.S. Market Trading Map” painted SOXX bars in green (buy) – see area ‘A’ in the chart. SOXX has been on a tear in recent days after breakout above the November falling trend line.  This week’s upside follow-through confirmed last week’s bullish breakout.  This is a positive development, opened up for a rapid advance toward the 161.8% Fibonacci extension near 274. 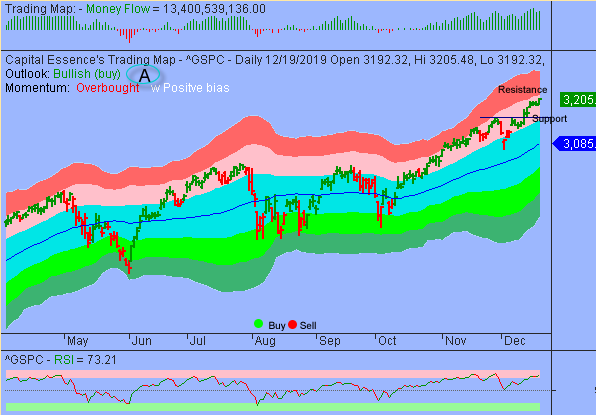 Key technical development in Monday session was a clear break above the important sentiment 3200 mark.  This is a positive development, signify a bullish breakout.  Over the next few days, the most important to watch is trading behavior near the lower boundary of the red band, currently at 3217.  As mentioned, the normal behavior for the S&P has been to consolidate and retreated almost every time it traded above the lower boundary of the red band, or extreme overbought zone, so there is a high probability that a significant consolidation pattern will again develop in this area.  With that said, while the overall technical backdrop remains positive, we’d be cautious against taking large position at this stage amid overbought conditions.  S&P has minor support near 3190.  A close below that level could trigger a short-term correction toward the 3150 zone.

In summary, Thursday’s bullish breakout above the important sentiment 3200 mark had helped putting the bulls back onto the driver side of the market.  Over the next few days, we will look for trading behaviors as the S&P probes the lower boundary of the red band, or extreme overbought zone.  The market had historically developed minor resistance near that level. There is no reason to turn particular bullish until overbought conditions are absorbed.