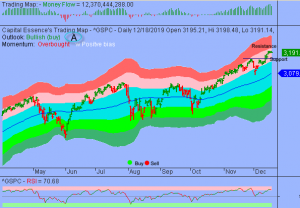 We’ve noted in the previous Market Outlook that: “although overbought condition is keeping buyers at bay, S&P’s 3200 will continue to act as price magnet.  This could help putting a short-term floor under the market.  As for strategy, traders should consider purchase stocks during short-term dips in the market and stay bullish.”  As anticipated, S&P closed slightly lower Wednesday falling 0.04 percent to 3,191.14.  The Dow Jones Industrial Average fell 0.1 percent to 28,239.28 while the NASDAQ added 0.05 percent to 8,827.74.  The CBOE Volatility Index (VIX), widely considered the best gauge of fear in the market, rose more than 2 percent to 12.58.

Notably, FedEx (FDX) tumbled nearly 10 percent after earnings disappointed and the package-shipping company cut its guidance for 2020.  As such, the iShares Transportation Average ETF (IYT) fell 0.9 percent on the day but is up more than 17 percent year to date, underperformed the S&P.  Now the question is whether recent weakness is a pause that refreshes or it’s a beginning of something worse?  Below is an update look at a trade in IYT. 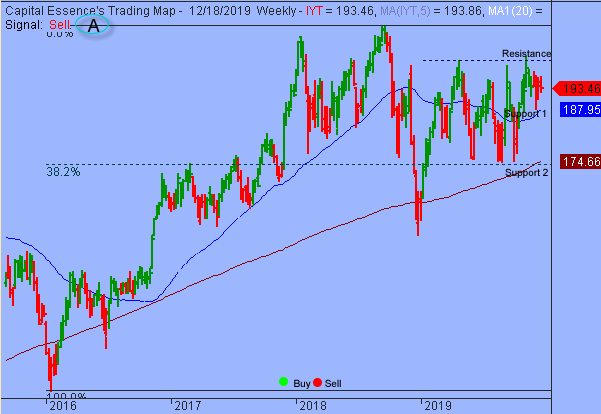 Our “U.S. Market Trading Map” painted IYT bars in red (sell) – see area ‘A’ in the chart.  Over the past few weeks, IYT has been basing sideways near the 1-year moving average after the early October rally ran into resistance near the 200 zone.  That level was tested several times over the past months.  It seems to us that the upper and lower limit of a short-term trading range has been set between 200 and 174.  Right now the most important thing to watch is trading behaviors near 188.  A close below that level will bring the 174 zone into view.

IYT has resistance near 200.  Short-term traders could use that level as the logical level to measure risk against. 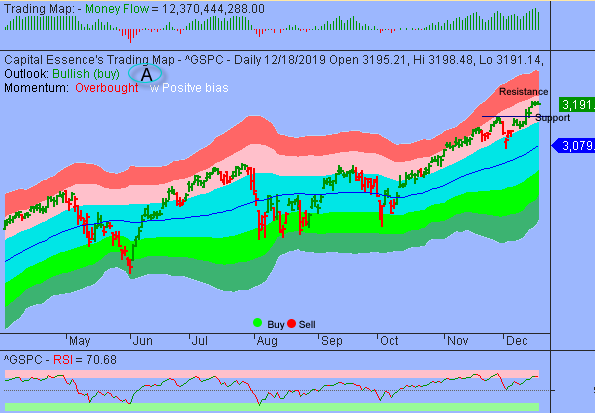 Not much has been changed.  S&P continues basing sideway near the important sentiment 3200 zone.  Momentum indicator shifted lower from overbought zone, suggesting further short-term weakness likely. Money Flow measure trended lower but still at the highest level going back to early 2019, indicating a positive net demand for stocks.  This could help putting a short-term floor under the market.

For the near term, the market has carved out key short-term resistance and support levels for traders to monitor.  At 3191, S&P is about 13 points below the red band, or extreme overbought zone.  The normal behavior for the S&P has been to consolidate and retreated almost every time it traded above the lower boundary of the red band so there is a high probability that a significant consolidation pattern will again develop in this area.  With that said, while the overall technical backdrop remains positive, we’d be cautious against taking large position at this stage amid overbought conditions.  S&P has minor support near 3182.  If it could hold above that level then a breakout above 3200 would be easier to be achieved

In summary, the big picture remains the same.  There’s an orderly high-level consolidation period near S&P’s 3200, which represented the digestion period in the aftermath of the December’s rally.  Market internals had been weakened but downside momentum does not appeared strong enough to generate widespread breakouts.