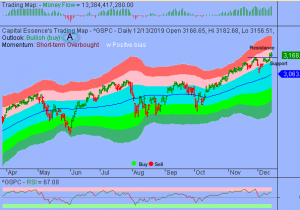 We’ve noted in the previous Market Outlook that: “S&P cleared key resistance Thursday but we expect upside follow-through to be limited by overbought conditions.”  As anticipated, stocks were little changed on Friday after China and the U.S. agreed to a phase one trade deal as investors concluded a solid week of gains.  For the day, the Dow Jones Industrial Average added just 3 points to 28,135.38. The S&P closed just above the flatline at 3,168.80 while the Nasdaq Composite gained just 0.2 percent to 8,734.88.  The CBOE Volatility Index (VIX), widely considered the best gauge of fear in the market, fell more than 9 percent to 12.63.

Tech stocks outperformed Friday as strength in Apple (AAPL), Microsoft (MSFT) and Adobe Systems (ADBE) had helped offset weaknesses in Facebook (FB), facing antitrust concerns, chipmaker Broadcom (AVGO), which reported weak earnings, and Advanced Micro Devices (AMD).  As such, the Technology Select Sector SPDR ETF (XLK) rose 0.66 percent on the day and is up more than 44 percent year to date, outperformed the S&P.  Now the question is whether the rally has more legs?  Below is an update look at a trade in XLK. 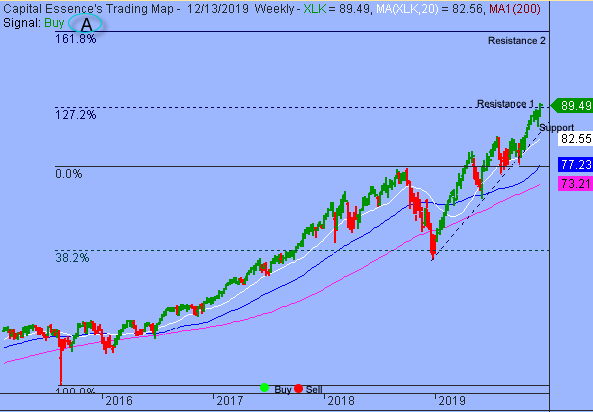 Our “U.S. Market Trading Map” painted XLK bars in green (buy) – see area ‘A’ in the chart. XLK has been on a tear in recent weeks after breakout in early October.  Last week’s rally has helped pushing the ETF above the closely watch 89 zone, or the 127.2% Fibonacci extension of the 2015-2018 upswing.  This is a positive development, signify a bullish breakout.  Right now follow-through is the key.  A close above 89 this week will confirm the bullish signal and open up for test of the more important resistance near the 104 zone, or the 161.8% Fibonacci extension.

XLK has support near 85.  Short-term traders could use that level as the logical level to measure risk against. 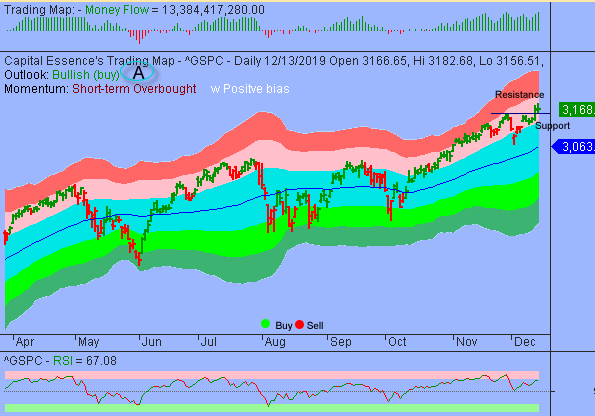 S&P inches toward the important sentiment 3200 zone after breaking out above the November high on Thursday.  In accordance to the Japanese candlestick pattern recognition, Friday’s spinning top indicated uncertainty.  Technically speaking, when a spinning top forms after an upswing in the market, it can be an indication of a pending reversal, as the indecision in the market is representative of the buyers losing momentum.  Overbought conditions will give the bullish more pressure than they have already had.

Over the next few days, traders should monitor trading behavior near 3150.  A close below that level will jeopardize Thursday’s bullish signal and a retest of the 3100 zone should be expected.

For now, 3200 is the most important level to keep on the trading radar.  That level roughly corresponds with the lower end of the red band, or overbought zone.  The normal behavior for the S&P has been to consolidate and retreated almost every time it traded into the red band so there is a high probability that a significant consolidation pattern will again develop in this area.

In summary, while the overall technical backdrop remains positive, Friday’s spinning top candlestick pattern in the S&P together with overbought conditions suggested that the index is at or very close to a significant near-term top. As for strategy, traders should consider buying downside protection on winning positions.