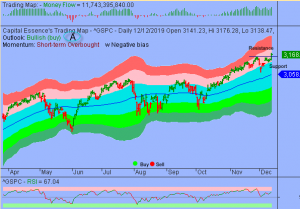 We’ve noted in the previous Market Outlook that: “the big picture remains the same. There is an orderly pullback consolidation, which represents digestion period.  The fact that the index managed to hold on to most of recent gains despite overbought conditions, indicating an internal strength.  This increases the probability that the S&P will break out from current trading range as soon as the market shakes off the excessive bullishness.”  As anticipated, stocks jumped on Thursday following report that a so-called phase one trade deal between the U.S. and China has been agreed to in principle.  For the day, the Dow Jones Industrial Average added 0.80 percent to 28,132.05. The S&P climbed 0.9 percent to 3,168.57. The Nasdaq Composite advanced 0.7 percent to 8,717.32.  The CBOE Volatility Index (VIX), widely considered the best gauge of fear in the market, fell 7 percent to 13.94.

Bank stocks also got a lift as Treasury yields rose. The benchmark 10-year Treasury yield advanced to 1.896 percent while the 2-year rate was at 1.66 percent. J.P. Morgan Chase, Bank of America and Citigroup all closed at least 1.6 percent higher.  As such, the SPDR S&P Bank ETF (KBE) surged 2.9 percent on the day and is up about 28 percent year to day, slightly outperformed the S&P.  Now the question is whether the rally has more legs?  Below is an update look at a trade in KBE. 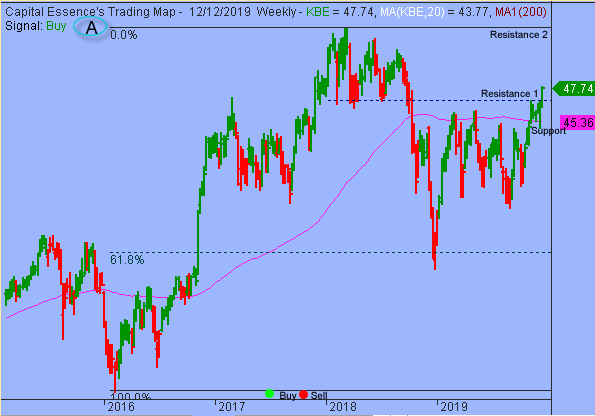 Our “U.S. Market Trading Map” painted KBE bars in green (buy) – see area ‘A’ in the chart. KBE has been on a tear in recent weeks after the late September correction found support near the April-July lows.  This week’s rally has helped pushing the ETF above the closely watch 47 zone, or the late 2018 breakdown point.  This is a positive development, signify an upside reversal and bullish breakout.  Right now follow-through is the key.  A close above 47 on a weekly basis will confirm Thursday’s bullish signal and open up for test of the more important resistance near the 52 zone, or the prior high set in 2018.

KBE has support near 45.30.  Short-term traders could use that level as the logical level to measure risk against. 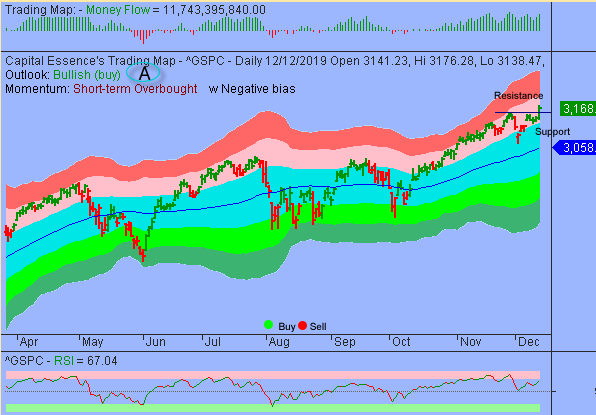 After correcting just over 50 points from the late November peak and met anticipated support at the important sentiment 3100 mark, S&P rebound has taken market above the bull market high and toward the important sentiment 3200 mark.  It’s obviously the most important level to keep on the trading radar.  That level roughly corresponds with the lower end of the red band, or overbought zone.  The normal behavior for the S&P has been to consolidate and retreated almost every time it traded into the red band so there is a high probability that a significant consolidation pattern will again develop in this area.

Traders however, must be mindful that the market is overbought following recent advance so more backing and filling would not be a surprise.  A close below 3100 would see a massive pickup in volatility.  We’d turn particularly bearish if the index closes twice below that level.

In summary, S&P cleared key resistance Thursday but we expect upside follow-through to be limited by overbought conditions.  While some backing and filling would not be a surprise, we expect an eventual breakout above 3200 in the days ahead.