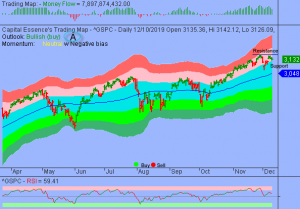 We’ve noted in the previous Market Outlook that: “our near-term work on price structure and momentum suggested strongly that the S&P might take a breather from its recent thrust to new highs.  As for strategy, traders should consider purchase stocks during declines in the market rather than chasing breakouts.”  As anticipated, stocks closed slightly lower Tuesday as traders await the Federal Reserve latest decision on monetary policy on Wednesday. The central bank is largely expected to keep rates unchanged.  For the day, the Dow Jones Industrial Average dipped 0.10 percent to 27,881.72. The S&P fell 0.11 percent to 3,132.52. The Nasdaq Composite declined 0.07 percent to 8,616.18.  The CBOE Volatility Index (VIX), widely considered the best gauge of fear in the market, surged more than 16 percent to 15.86.

Oil prices inched up on Tuesday as OPEC’s deal with associated producers last week to deepen output cuts in 2020 continued to provide a floor for prices.  West Texas Intermediate oil settled up 22 cents at $59.24 a barrel.  As such, the SPDR S&P Oil & Gas Exploration & Production ETF (XOP) rose 0.70 percent on the day but is down about 19 percent year to day, underperformed the S&P.  Now the question is whether the rally has more legs?  Below is an update look at a trade in XOP. 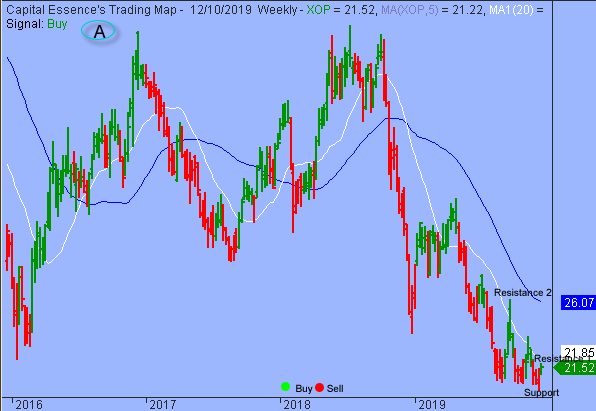 Our “U.S. Market Trading Map” painted XOP bars in green (buy) – see area ‘A’ in the chart. Over the past few weeks, XOP has been trending lower after the late October oversold rebound ran out of steam near formidable resistance.  The mid-November downswing tested and respected support at the prior lows set in August and October.  This week’s rally pushed the ETF up against the 20-week moving average, a key technical level.  That level was tested several times over the past months.  A sustain advance above 22 on a weekly basis signify a bullish breakout with an upside target near 26.

XOP has support near 19.90.  Short-term traders could use that level as the logical level to measure risk against. 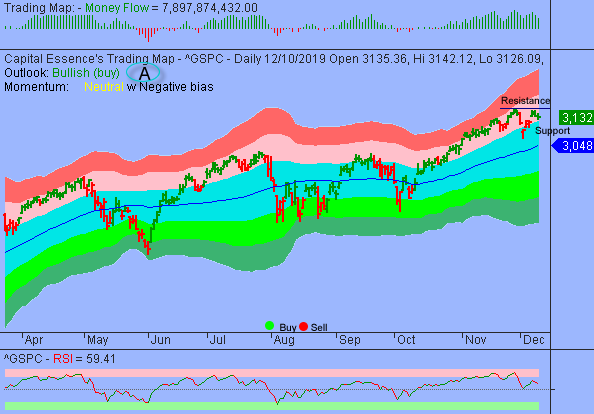 As expected, S&P moved down to test support at last week’s bullish breakaway gap.  That level roughly corresponds with the lower boundary of the pink band.  As mentioned, while the gap filling process was normal, the overbought conditions suggested a cautious approach over the short to medium term.  Money Flow measure however, still holds above the zero line, indicating a positive net demand for stocks.  This could help putting a short-term floor under the market.

S&P is developing a consolidation pattern between 3120 and 3150.  The development of the new uptrend starts when the S&P moves out of the congestion band.  The new uptrend is confirmed when the index is able to hurdle and sustain above 3150.  That, if happen, could trigger acceleration toward the important sentiment 3200 mark.

In summary, S&P is in a holding pattern as traders wondered whether more gain is warranted given the massive advance over the past months. While the near-term technical outlook remains positive, a close above 3150 is required to neglect the short-term downward trend pressure.  On balance, we remain bullish on the S&P and looking to buy into market dips.