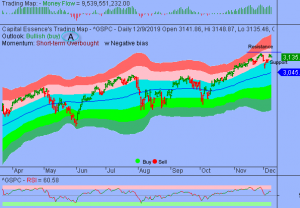 We’ve noted in the previous Market Outlook that: “S&P cleared key resistances, breaking out from a short-term downward trend.  Consecutive close above 3122 would signify a breakout and bullish reversal, supporting upside follow-through in the weeks ahead.  However, market is short-term overbought following recent advance. There could be a sell-off in the offing but it would be shallow if so.”  As anticipated, stocks closed lower Monday ahead of a Federal Reserve meeting this week and worries about U.S.-China trade talks.  For the day, the Dow Jones Industrial Average fell 0.4 percent to 27,909.60. The S&P pulled back 0.3 percent to 3,135.96 while the NASDAQ slid 0.4 percent to 8,621.83.  The CBOE Volatility Index (VIX), widely considered the best gauge of fear in the market, surged more than 16 percent to 15.86.

Also contributed to the overall weakness was an overnight report that Chinese exports in November were down 1.1 percent from October. Investors were expecting a small gain.  The China concerns weighed on tech and tech-related shares.  As such, the iShares PHLX Semiconductor ETF (SOXX) fell 0.46 percent on the day but is up about 49 percent year to day, outperformed the S&P.  Now the question is whether recent weakness is a pause that refreshes or it’s a beginning of something worse?  Below is an update look at a trade in SOXX.

Our “U.S. Market Trading Map” painted SOXX bars in green (buy) – see area ‘A’ in the chart. Over the past few weeks, SOXX has been basing sideways near the 127.2% Fibonacci extension of the 2015-2018 upswing as it works off overbought conditions.  The fact that the ETF manages to hold on to most of the October’s massive gains is pretty impressive.  It’s indicated an internal strength.  So it seems to us that SOXX could break to new highs as soon as it shakes off excessive optimism.  Resistance is around 239.  A close above that level on a weekly basis signify a bullish breakout with an upside target near 274, or the 161.8% Fibonacci extension.

SOXX has support near 218.  Short-term traders could use that level as the logical level to measure risk against. 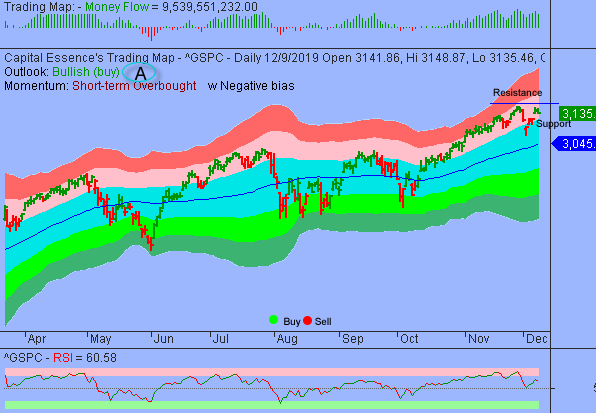 As expected, S&P retreated after last Friday’s rally ran into resistance near the prior high set in late November.  There is a higher than average odds that the S&P is setting up for a test of support at last week’s bullish breakaway gap near 3120.  While the gap filling process was normal, the overbought conditions suggested a cautious approach over the short to medium term.  Money Flow measure however, still holds above the zero line, indicating a positive net demand for stocks.  This could help putting a short-term floor under the market.

There is a strong band of resistance between 3155 and 3175, or the November high and the lower boundary of the red band.  This is a major resistance level.  The normal behavior for the S&P has been to consolidate and retreated almost every time it traded into the red band so there is a high probability that a significant consolidation pattern will again develop in this area.

In summary, our near-term work on price structure and momentum suggested strongly that the S&P might take a breather from its recent thrust to new highs.  As for strategy, traders should consider purchase stocks during declines in the market rather than chasing breakouts.