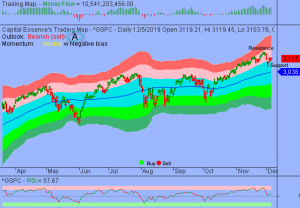 We’ve noted in the previous Market Outlook that: “S&P is at key technical juncture.  Current rally is testing resistance at Tuesday’s bearish breakaway gap.  The longer the index stay below that level, the more vulnerable it is to lower prices.”  As anticipated, stocks ended Thursday’s session little changed as investors digested strong employment data while they monitored the latest news from the U.S.-China trade negotiations.  For the day, the Dow Jones Industrial Average gained just 0.1 percent to 27,677.79. The S&P added 0.16 percent to 3,117.43 while the NASDAQ Composite gained less than 0.1 percent to 8,570.70.  The CBOE Volatility Index (VIX), widely considered the best gauge of fear in the market, fell nearly 2 percent to 14.52.

Throughout the day, materials, financial and tech stocks were the market leaders.  JPMorgan Chase (JPM), Campbell Soup (CPB) and RH (RH) hit new 52-week highs.  As such, the Technology Select Sector SPDR ETF (XLK) rose 0.37 percent on the day and is up 40 percent year to day, outperformed the S&P.  Now the question is whether the rally has more legs?  Below is an update look at a trade in XLK. 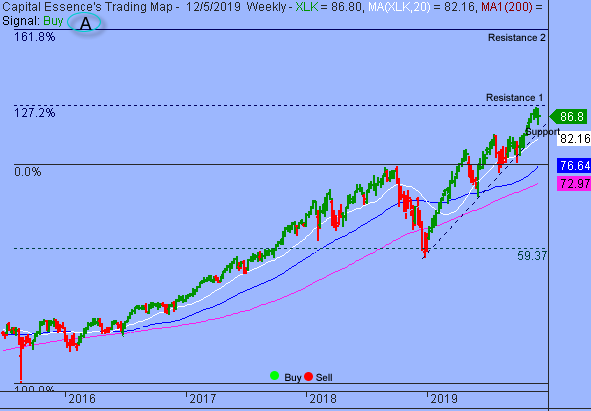 Our “U.S. Market Trading Map” painted XLK bars in green (buy) – see area ‘A’ in the chart. Over the past few weeks, XLK has been basing sideways near resistance at the 127.2% Fibonacci extension as it works off overbought conditions.  The fact that XLK managed to hold on to most of the October gains indicating an internal strength.  This is a positive development, suggesting that the ETF will breakout to new high as soon as it works off excessive optimism.  XLK has resistance near 88.59.  A sustain breakout above that level will trigger acceleration toward the 161.8% Fibonacci extension near 104.

XLK has support near 82.  Short-term traders could use that level as the logical level to measure risk against. 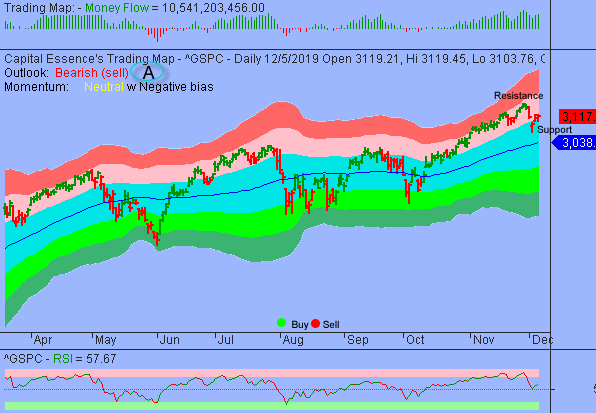 S&P consolidates near the important sentiment 3100 mark as market digested overbought conditions.  The index traded in its narrowest range since market broke down on Monday.  Technically speaking narrow range (or neutral) bar indicates uncertainty – traders refuse to press hard one way or the other just because they are not very sure about the near-term direction.  This explains why market often uses neutral bar to change direction.  The overbought condition will give the bulls more pressure than they have already had.  Over the next few days, traders should watch for consolidation and a potential retreat and retest of 3100 as a support level.

Upside target is at the lower boundary of the red band, currently at 3185.  This is a major resistance level.  The normal behavior for the S&P has been to consolidate and retreated almost every time it traded into the red band so there is a high probability that a significant consolidation pattern will again develop in this area.  But it’s not expected this week.  S&P has minor support near 3070.  A failure to hold above that level will trigger a new leg lower with downside target around 3038 but for now it looks firm.

In summary, S&P turned indecisive as traders wondered whether more gain is warranted given the massive advance over the past few weeks.  Although the near-term technical bias is currently tilted toward weaknesses than strengths, the path with least resistance remains to the upside as long as S&P holds above 3100.  As for strategy, a pullback will present a buying opportunity, while selling into strength may not be the best strategy in a market considered likely to bounce back.