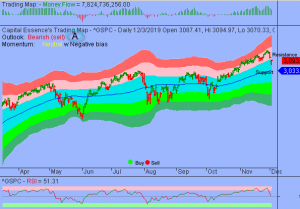 We’ve noted in the previous Market Outlook that: “near-term technical bias shifted to bearish following Monday selloff, signify a downward trend reversal.”  As anticipated, stocks closed lower Tuesday but off intraday low after Donald Trump suggested there won’t be a trade deal with China in 2019 and maybe not until after next year’s election. For the day, the Dow Jones Industrial Average fell 1 percent to 27,502.81. The S&P also gave up 0.7 percent to 3,093.20 while the Nasdaq Composite lost 0.6 percent to 8,520.64.  The CBOE Volatility Index (VIX), widely considered the best gauge of fear in the market, jumped 8 percent to 15.96.

Chip stocks with higher-than-average overseas sales exposure underperformed the broader market after Donald Trump suggested he may want to delay a trade deal with China until after the 2020 presidential election.  As such, the iShares PHLX Semiconductor ETF (SOXX) fell 1.55 percent on the day but is up more than 44 percent year to day, outperformed the S&P.  Now the question is whether Tuesday pullback is a pause that refreshes or it’s a beginning of something worse?  Below is an update look at a trade in SOXX.

Our “U.S. Market Trading Map” painted SOXX bars in red (sell) – see area ‘A’ in the chart. SOXX has been on a tear over the past months after the September correction found support near the 2019 rising trend line.  The October rally pushed the ETF up against the 127.2% Fibonacci extension of the 2015-2018 upswing. This week’s massive selloff suggested that the resistance would hold and a retest of support at the 2019 rising trend line, just below 217, is inevitable.  This level is significant in charting terms.  If SOXX could hold above it then a breakout above the early November congestion would be easier to achieve.  A failure to hold above that level meanwhile, will bring the 1-year moving average, around 200, into view.

SOXX has resistance near 237.  Short-term traders could use that level as the logical level to measure risk against. 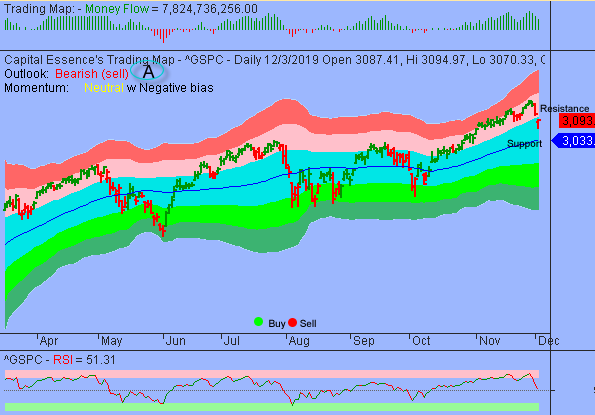 Key technical development in Tuesday session was a close below the important sentiment 3100 mark.  This is a negative development, signify a bearish breakout and downside reversal.  While seemingly vulnerable to further short-term weakness, Money Flow measure still holds above the zero line, indicating a positive net demand for stocks.  This could help putting a short-term floor under the market.  S&P has minor support near 3070.  A failure to hold above that level will trigger a new leg lower with downside target around 3033 but for now it looks firm.