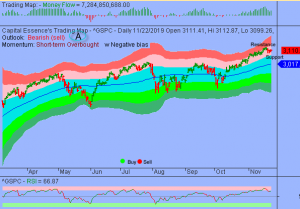 We’ve noted in the previous Market Outlook that: “an overbought pullback consolidation interrupted the October rally in the S&P.  Although seemingly vulnerable to further short-term weakness, the overall technical backdrop remains positive so sell-off could be shallow because the sideline money will try to fight its way back into the market.”  As anticipated, stocks rose slightly on Friday, but posted their first weekly decline in over a month amid lingering worries around U.S.-China trade talks.  For the day, the S&P gained 0.2 percent to 3,110.29 while the Nasdaq Composite advanced 0.16 percent to 8,519.88.  The Dow Jones Industrial Average climbed 0.4 percent to 27,875.62.  The CBOE Volatility Index (VIX), widely considered the best gauge of fear in the market, fell more than 6 percent to 12.34.

Banks were especially strong with US Bancorp (USB) hitting a 52-week high. Airlines were gainers as oil prices fell back.  As such, the SPDR S&P Bank ETF (KBE) rose 0.55 percent on the day, but is up about 23 percent year-to-date, outperformed the S&P.  Now the question is whether the rally has more legs?  Below is an update look at a trade in KBE. 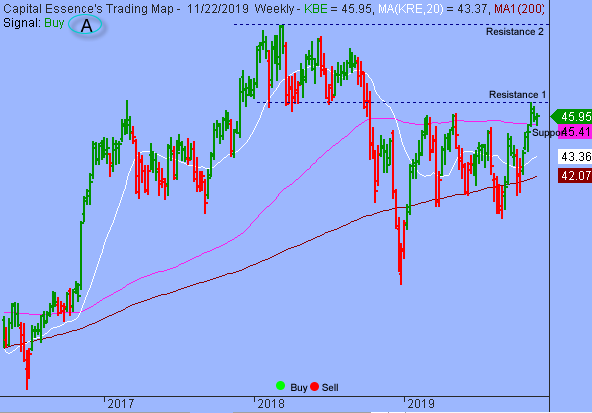 Our “U.S. Market Trading Map” painted KBE bars in green (buy) – see area ‘A’ in the chart.  Over the past few weeks, KBE has been trending lower in a short-term corrective mode after the October rally ran out of steam near the late 2018 breakdown point.  The correction is testing support at the 2-year moving average.  That level was significant when the ETF climbed above it in early November.  It’s now acting as strong support.  If KBE could hold above that level then a retest of the late 2018 high would be easier to achieve.  Immediate resistance is around 47.  A sustain advance above that level could trigger acceleration toward 52, or the 2018 high.

KBE has support near 45.  Short-term traders could use that level as the logical level to measure risk against. 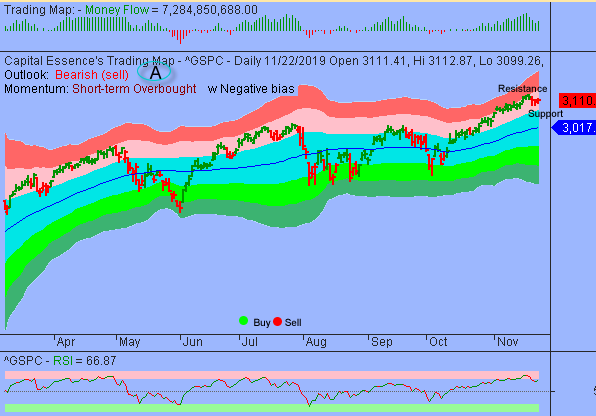 S&P continues basing sideways, using the important sentiment 3100 mark as support.  Despite last week’s pullback, market remains overbought.  Although near-term technical bias is skewed toward short-term weaknesses, Money Flow measure is above the zero line, indicating a positive net demand for stocks.  This suggested that selling into strength might not be the best strategy in a market that is likely to bounce back.

Right now, 3100 is the line in the sand.  A failure to hold above that level will trigger downside follow-through and a test of the more important support near the 3085 zone should be expected.

In summary, based upon recent trading action, the S&P is in a short-term overbought correction.  Although seemingly vulnerable to further short-term weakness, the overall technical backdrop remains positive so buying into short-term dips remains the most profitable strategy.