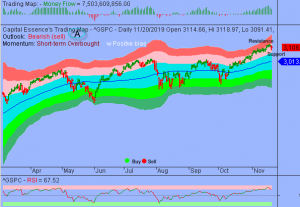 A report that the so-called phase-one trade deal may not be signed before year-end sent equities lower Wednesday with the S&P pulled back 0.38 percent to close at 3,108.46. The Nasdaq Composite dropped 0.51 percent to 8,526.73.  The Dow Jones Industrial Average fell 0.4 percent to 27,821.09.  The CBOE Volatility Index (VIX), widely considered the best gauge of fear in the market, fell less than 1 percent to 12.84.

Apple shares dropped to close 1.2 percent lower along with Broadcom, Analog Devices and Qualcomm all fell about 2 percent amid uncertainty around U.S.-China trade talks.  As such, the iShares PHLX Semiconductor ETF (SOXX) fell 1.18 percent on the day, but is up more than 48 percent year-to-date, outperformed the S&P.  Now the question is whether recent pullback is a pause that refreshes or it’s a beginning of something worse?  Below is an update look at a trade in SOXX.

Our “U.S. Market Trading Map” painted SOXX bars in green (buy) – see area ‘A’ in the chart.  SOXX fell below the 127.2% Fibonacci extension after climbed above that level in early November.  This is a negative development but given the magnitude of the October rally, a short-term pullback consolidation isn’t necessarily a bad thing.  It’s giving the bulls a short-term breather before pushing prices higher again.  SOXX has support near 215. If the ETF could hold above that level then a push above 235 would be easier to achieve.  Above it, a more significant resistance is around 277, or the 161.8% Fibonacci extension.

SOXX has support near 215.  Short-term traders could use that level as the logical level to measure risk against. 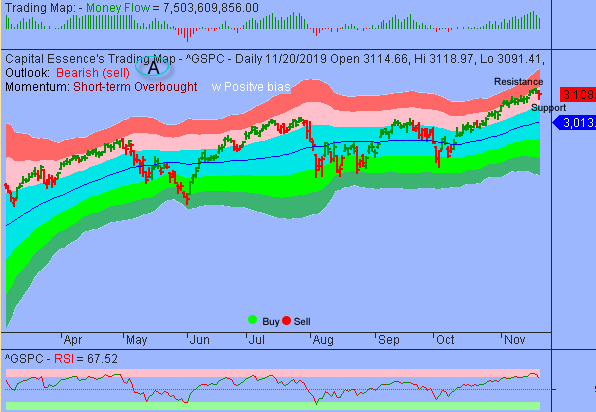 As expected, S&P moved down to test support at the important sentiment 3100 mark after recent rally ran out of steam near the lower boundary of the red band, a key technical level.  Market internal has been weakened but downside momentum does not appear strong enough to generate a widespread breakdown.  Perhaps the positive Money Flow measure is the best illustration of the bulls’ case.

Over the next few days, traders should monitor trading behaviors near 3097.  A failure to hold above that level will trigger downside follow-through and a test of the more important support near the 3075 zone should be expected.

In summary, our near-term work on price pattern and momentum suggested strongly that the S&P is in a midst short-term pullback correction phase that could last about 5 to 10 trading sessions.  While the near-term technical bias is skewed toward further weakness, the bulls should not get into any serious trouble as long as the market holds above 3075. As for strategy, pullback will present a buying opportunity, while selling into strength may not be the best strategy in a market considered likely to bounce back.