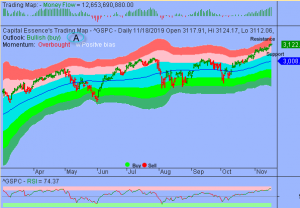 We’ve noted in the previous Market Outlook that: “S&P cleared key technical resistance, breaking out from the one-week congestion trading pattern.  The breakout would be confirmed on a consecutive close above 3100, which would support near-term upside follow-through and a test of more important resistance in the 3170 area.”  As anticipated, stocks posted fresh records on Monday before closing little changed as investors digested mixed signals around U.S.-China trade talks.  The Dow Jones Industrial Average added 0.1 percent to 28,036.22. The S&P advanced 0.05 percent to 3,122.03 while the Nasdaq Composite closed 0.1 percent higher at 8,549.94.  The CBOE Volatility Index (VIX), widely considered the best gauge of fear in the market, rose more than 3 percent to 12.46.

The energy sector was the biggest percentage loser Monday dropping 1.32% as oil prices fell.  NYME-traded WTI fell 1.2 percent to $57.14 per barrel. On Friday, it gained 1.7 percent, soaring to a seven-week high of $57.97, after Commerce Secretary Wilbur Ross and White House economic adviser Larry Kudlow suggested that Washington and Beijing were closing in on a deal.   As such, the Energy Select Sector SPDR ETF (XLE) fell 1.22 percent on the day, but is up more than 3 percent year-to-date, underperformed the S&P.  Now the question is whether recent pullback is a pause that refreshes or it’s a beginning of something worse?  Below is an update look at a trade in XLE. 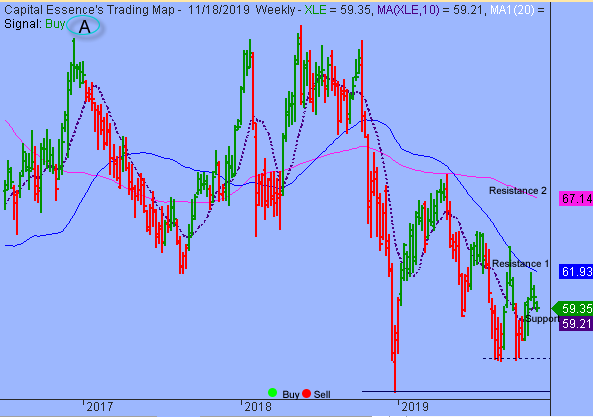 Our “U.S. Market Trading Map” painted XLE bars in green (buy) – see area ‘A’ in the chart.  Over the past few weeks, XLE has been trending lower after the October rally ran into resistance near the 1-year moving average, a key technical level based on moving averages.  That level was tested several times over the past months.  Technically speaking, the more often resistance is tested, the weaker it becomes.  Over the next few days, traders should monitor trading behavior as the 59 zone is tested as support.  If XLE could hold above that level then a retest of the 1-year moving average, near 62, would be easier to achieve.  A sustain advance above that level has measured move to around 67.

XLE has support near 59.  Short-term traders could use that level as the logical level to measure risk against. 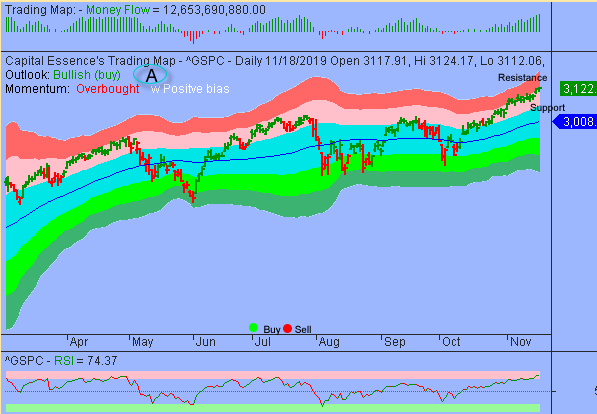 S&P trades in broad trading bands that define the trend behavior. The upswing was very rapid with some short-term consolidation near each of the significant support or resistance levels. These support and resistance levels also define the limits and barriers to any future rally and uptrend development.

S&P continues drifting higher near the lower boundary of the red, or extreme overbought zone.  While overbought condition is normal during a pro-long uptrend, it’s suggested that upside momentum might not sustain without at least a short-term breather.  Nevertheless, Money Flow measure is at the highest level since summer 2019, indicating a positive net demand for stocks.  This could help putting a short-term floor under the market.  With this in mind we’d look to increase exposure into short-term market dips rather than chasing breakouts.

In summary, while overbought is putting a cap on the upside the overall technical backdrop remains supportive so downside risk could be limited. It is possible that S&P could continue to drift higher as trading sentiment remains strong.  As for strategy, traders should look to increase exposure into short-term market dips rather than chasing breakouts.